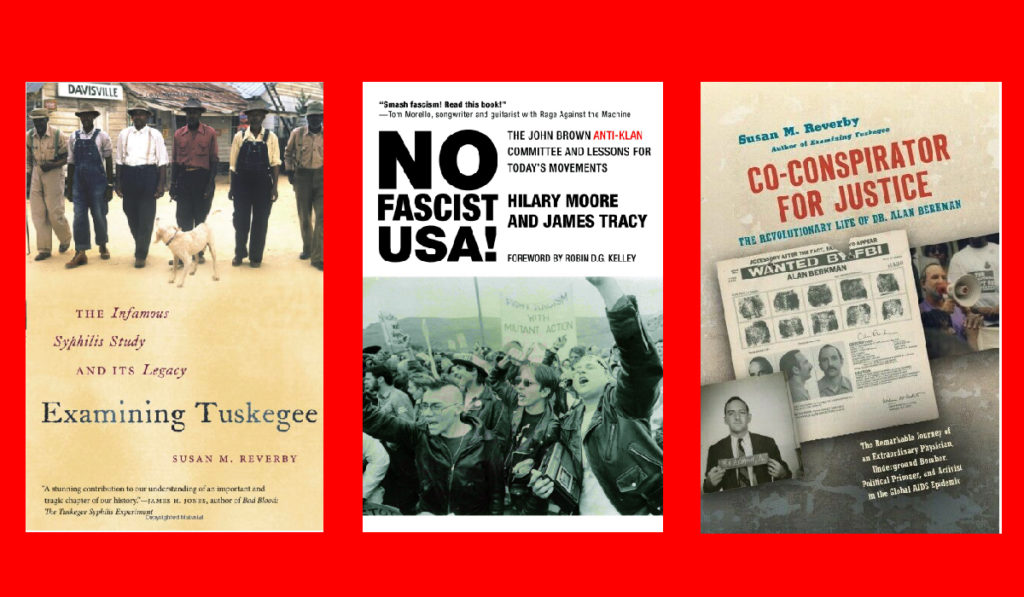 The authors of these books will speak about anti-fascist movements, sponsored by City Lights Booksellers, Carmichael’s Bookstore and Louisville Showing Up for Racial Justice.

#BreonnaCon
Various Locations
Free  |  Times vary
BreonnaCon, by the national social justice organization Until Freedom, continues with a full day, including an Organizing Bootcamp and Breonna’s Law Policy Roundtable at Simmons College, starting at 11 a.m. And, a Praise in the Park mass spiritual revival at Waterfront Park at 7 p.m. Tomorrow, Until Freedom is hosting a march on the LMPD Training Academy at 2 p.m., starting at South Central Park. LMPD is aware of the demonstration. Some local organizers and leaders have criticized BreonnaCon. You can read about why there is tension between local and national organizers here.

Open Air Yoga
Bicentennial Park, New Albany
$10  |  7 p.m.
You might have a case of the 2020s if you’re feeling anxious and exhausted by life. Luckily Heart 2 Heart Wellness Center, a Black-owned business in New Albany, has a salve: outdoor, healing yoga on Wednesdays and Saturdays through the month of August. “Come restore balance & inner peace with our yoga classes that are designed to reduce anxiety, strengthen your mental wellness and your body,” organizers say. On Wednesday, “Robin” leads a traditional flow yoga class at 7 p.m. at Bicentennial Park.

No Fascist USA! Talk #4
Zoom
Free  |  Noon-1:30 p.m.
This is the final of four talks about anti-fascist movements, sponsored by City Lights Booksellers, Carmichael’s Bookstore and Louisville Showing Up for Racial Justice. Hilary Moore and James Tracey, the authors of “No Fascist USA!: The John Brown Anti-Klan Committee and Lessons for Today’s Movements,” are among those leading the discussion. Susan M. Reverby, the author of “Examining Tuskegee: The Infamous Syphilis Study and Its Legacy” and “Co-conspirator for Justice: The Revolutionary Life of Dr. Alan Berkman” will also be there. Register beforehand to participate.

Reparations Roundtable
Zoom
Free  |  9-11 p.m.
Louisville’s Reparations Roundtable group continues to collect donations from and educate white people who want to give back to American descendants of slavery on their own instead of waiting on the government. This is one of the organization’s monthly learning meetings.

100 Years Later: The Collective Power of Women
Muhammad Ali Center/Facebook Live
Free (or $10 donation)  |  10-11 a.m.
Every year, the Muhammad Ali Center honors female leaders of social change, activism and pursuits of justice with its Daughters of Greatness program. In commemoration of the 100th anniversary of the 19th Amendment (granting women the right to vote), the Ali Center and Metro United Way are hosting this virtual (and in-person) conversation “on the collective power of women, the systems that divide us, and the imperative for true unity.” A diverse group of past Daughters of Greatness will lead the talk, including founding Daughter Ambassador Shabazz (the oldest daughter of Malcolm X) and Cate Fosl of the Anne Braden Institute.

Black Breastfeeding Week
Anywhere
Donation based  |  Any time
In celebration of Black Breastfeeding Week, the Kentuckiana Lactation Improvement Coalition is collecting donations to help Black women, including for photo sessions for Black mothers, scholarships for Black lactation education and female Black-owned businesses. Black Breastfeeding Week exists because Black infants have higher mortality rates than white babies, and these Black children could especially benefit from the immunity and nutritional benefits of breast milk, organizers say. You can donate via PayPal to [email protected].

Black Market KY
Anywhere
Donation based  |  Any time
If you missed it, Black Market KY, a Black-owned grocery store with plans to open in The West End, raised $10,000 in one day this weekend by asking 100 people to invest $100. But, you can still contribute your share by sending money via CashApp or Venmo.