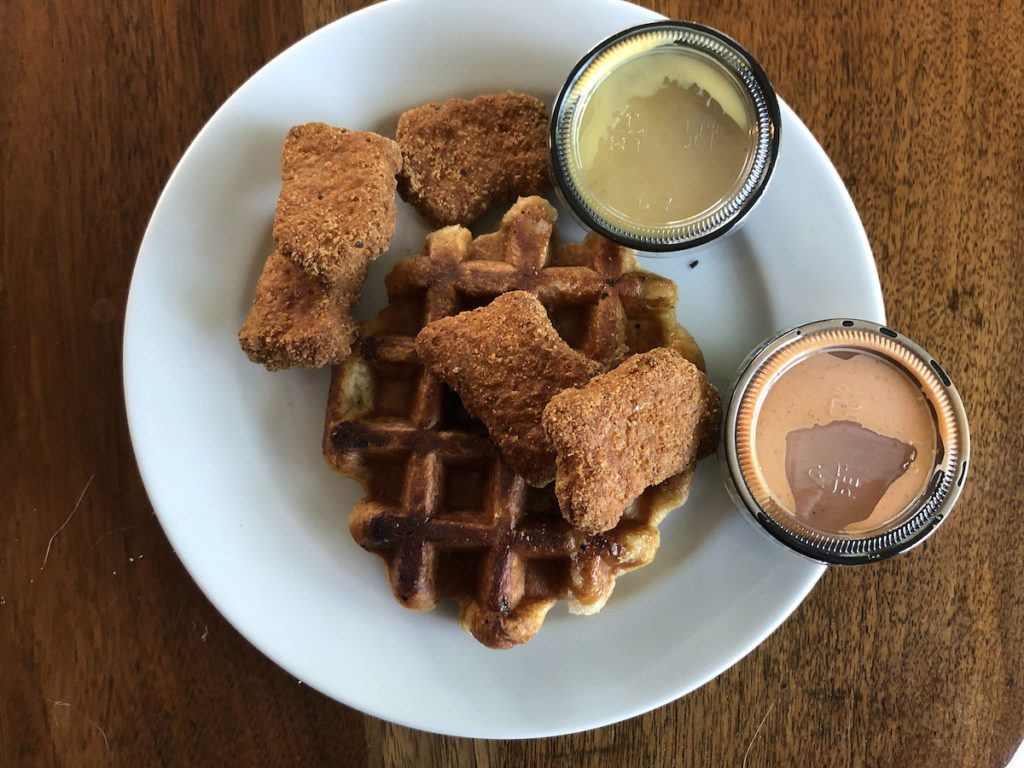 A thick, sugar-coated Liege waffle forms a base for a batch of NUGGS, a new meatless chicken suggest with a crunchy breading and surprisingly persuasive chicken flavor.

“From food truck to brick and mortar. A dream has come true!” With palpable joy, Troy King and Selena Johnson, the owners of the Pollo food truck and Shelby Park’s popular Six Forks Burger Co., announced on social media last month that Pollo has landed in a Clifton storefront.

Pollo, or Pollo — a gourmet chicken joint, if you want to be formal about it, has been a familiar sight around town with its rolling quarters in an old, short school bus painted dark gray. It’s been operating since 2014, but King and Johnson were eager to add a land-based location just as Six Forks marked its first anniversary this month.

Occupying the former home of Ngon Appétit Vietnamese in a Lower Brownsboro Road strip center not far east of Clifton Kroger, Pollo currently has room for only a few socially distanced tables in a dining room decorated with exuberant hexagons in pink, yellow, black and white. Four more properly spaced tables reside out front, in a shaded inset space and a colorful corral setup in a parking space. An online menu is available for takeout or delivery, and they’ll bring your lunch to you at curbside if you prefer.

Despite the restaurant’s Spanish-sounding name, the menu incorporates a variety of mostly down-home-style dishes plus a few tempting alternatives with flavors from France, Thailand and yes, a quesadilla, tamales and a couple of tacos.

The menu, which contains many familiar items from the food truck, features seven sandwiches and 12 entrées. Needless to say, every single one of them contains chicken. That said, however, many of the dishes may be made with your choice of fried chicken, roast chicken or NUGGS, one of the latest (and perhaps one of the most persuasive) modern crop, plant-based meat lookalikes.

Appealing pricing makes Pollo one of the best deals around, with no entrée more than $9.95 (for fried wings). The bottom end of the price range lands at a thrifty $6.50 (for fried chicken tenders or tamales smothered with queso blanco and Monterey jack).

All the sandwiches are $7.95 save for the $8.50 cheesesteak. Sometime when I’m extra hungry I might have to try the $7.95 Selena’s grilled cheese sandwich, a mass of chicken, Havarti cheese, mac-and-cheese, chopped bacon and choice of sauce on buttered Texas toast.

Speaking of sauces, there are 11 to choose from, many either sweet, hot or hotter, including chocolate bourbon, Caribbean jerk or raspberry chipotle barbecue, not to mention something called Hot Shit (with a perhaps unnecessary parenthetical “hot”).

We ordered by phone and arrived before our lunch was quite ready, but it didn’t take long. Our choices — two entrées and two sides plus three sauces — came out in large, white, plastic foam boxes and held their heat quite well during the quick trip home.

One entrée, chicken stir-fry ($9.50), with our choice of shredded roast chicken, comes with the chef’s choice of guacamole salsa on the side. The entrée was huge, enough to feed two or more all by itself. A huge portion of fluffy, steaming and well-made, white, long-grain rice was topped with more than a cup of tender shredded chicken, with no crunchy bits or skin. Over all that was a simple salad of iceberg lettuce, pale tomato slices and plenty of jalapeño strips and banana pepper rings. The thin, smooth guacamole salsa whacks your taste buds with a jalapeño punch, not necessarily a bad thing as long as you know it’s coming.

A thick, round waffle made a more sweet than savory base for chicken and waffles ($7.95) topped by five rectangular NUGGS. It was my first encounter with these chicken surrogates, and I was pleasantly surprised. A thick, crunchy shell of breading fried dark golden brown cloaked a tender, juicy, white interior with a stringy texture and meaty flavor that did a startlingly good job of replicating the familiar fried bird. The waffle was small and round and dusted with sugar in the style of Liège, Belgium. I liked its flavor but found it almost too chewy to get through. It came with sweet, tangy, coconut honey mustard, and I added a gently spicy Buffalo ranch.

A large side of twisted potatoes ($3.50), a signature french fry alternative at both Pollo and Six Forks, are cut, as the name implies, into thick strips that are given a twist before frying to form them in their characteristic shape. They are fried creamy and delicious and finished with a dusting of mild spices for additional flavor.

Fried okra ($3.50) also came in a huge portion. The okra bits, including a few head and tail ends, were crunchy and tasty, with cornmeal adding texture to the breading.