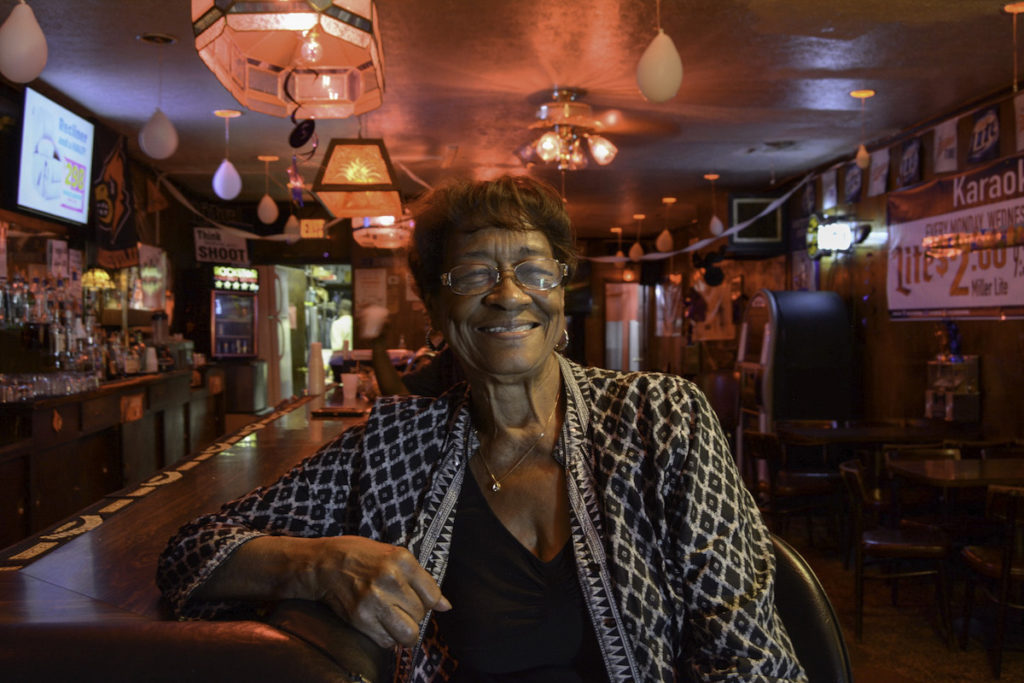 This West of Ninth is a rerun from last year to help draw attention to an effort to raise money to save Syl’s Lounge in Russell from closing. A gofundme page has been set up: “Save Syl’s Lounge.” It says, in part, “The funds raised will help cover much needed repairs (replacing a gas line, fixing a leaky part of the roof), mounting utility bills, insurance, liquor/beer license fees, property taxes, and lost income. Syl’s has not received support from the Small Business Administration or any other source, so Ms. Syl must humbly ask you, her neighbors and friends and customers, to help Syl’s make it through this stretch. Without your support, another beloved West End institution might be forced to close.”

Jan. 7, 2019
Ms. Syl, owner of Syl’s
“Well, we will go back to the ‘50s, where it first started. This used to be a grill. It happened due to urban renewal. It came through and wiped out all the businesses. It wiped out all the Black businesses on Muhammad Ali. The people that had the spot made it a bakery. I think it was called Givens Catering, and they were known for their pies and sweets and stuff like that. They had the business on Muhammad Ali, but when urban renewal came through, they moved over here. They built this little place and had a grill here instead of the bakery. So it was called Mills. Their last name was Mills, Homer and Juanita Mills, and they named it Mills Grill, and it was a grill for quite awhile. Then, Mr. Mills was stationed at Fort Knox. He was in the Army, and he had a lot of buddies that came in from Fort Knox, and they were looking for a quaint little place to gather and have drinks and be in a safe environment. So he decided to change the grill to a lounge. So, it became Mills Lounge. He’d done very well with the Fort Knox crowd, and then as time wound down, and the guys began to leave the area, they lost a lot of the soldiers coming into Louisville. Then, he and his wife decided that they were going to go their separate ways. So that was the end of the business. One wanted to keep this place, and the other one wanted out, and they could not afford to buy each other out. So, they came to the decision that they would sell the business and split it.

So, my husband did his 20 years at Ford, and then he thought about retiring. He began to have a little heart problem, and he thought, ‘I’d better come out, now, while I can enjoy myself.’ So, he had a friend that was in real estate, Mr. Carl Hines, who was a very good realtor. He was talking to him one day, talking about how he always wanted a quaint little bar or something. Carl looked at him and said, ‘I have just the place for you,’ which was this place, here, and it was up for sale. So, the owners wanted a lot more than what we had, but the realtor said to make them a cash offer, and that they just might take it because they’re splitting up. They were going their separate ways, and they wanted out. So we made the offer, and they took it. They were asking for $95,000. We offered them $50,000. They took it and walked out.

They left everything just like it was. We used to have these little jukeboxes, along the bar, when I first came here. They were from the ‘50s. You’d put your quarters in and play music. When the computerized jukeboxes came along and all, there was no way to keep up with changing the records and everything. So, that was the end of that. They just became antiques, and a guy came here one year, a white guy, on his way somewhere out west. He was going to open a diner, and he wanted these little jukeboxes to be in the diner. He asked if I’d be interested in selling them, and I told him that it depended on what he was going to give me. So, he made me an offer, and I told him that he could take them the same day. So, we disassembled them off the bar, loaded him up, with his little trailer, and he was on his way. I wondered how it panned out, but I never heard anything from it.

So, the bar deal went through, but when I came up here, I looked at a business that really fell off, and I could see why the old owner was getting out. There wasn’t a soul in here during the day. I told my husband that I didn’t know about it. We were going to put every dime we got in this place, and we didn’t know if it would sink or swim. He really wanted to do it, and we jumped right in.

When my husband retired from Ford, he bought this. I came out of American Standard because they were scaling down. I came out in ‘88, and we bought this bar in ‘90. He ran it during the day, and it really wasn’t good, at first. We weren’t making it. Then, he had a lot of friends that were musicians, very good musicians, that had played with big bands all over and everything. But they really hadn’t gotten their due. You know, they should have really made out and been big time, with big people, but they played around and then they came back to Louisville. One of his friends was in here, one day, an organ player. He just died about three or four months ago. His name was Billy Madison, and he was phenomenal, and he wanted to know if he could play organ in here. He’d get a couple of guys with him. He had a drummer and a saxophone player, and they came and set up right in that corner, over there. It would be crowded when they played.

The original owners had been closed on Thursdays, so Thursday was our worst day. People were not coming on Thursday, so we didn’t do anything. So, we’re like, you know, let’s try the band on Thursday and see if that’ll loosen things up. A lot of naysayers said we would never make it. Well, we tried it, and it took off. Thursday was our best night. It would be running over. Thursday was so good that we decided to go to Friday and then Saturday. So after a while, Thursday, Friday and Saturday we had jazz here. We never charged a cover charge because the same people came all the time. They were regulars, and they didn’t feel comfortable paying to come in to spend. They felt that if they would come here, they were going to help pay utilities and everything. A cover charge would have helped because it always helps you to defray the costs of the band. You gotta sell a lot of drinks to pay your band and your waitress and your barmaid and everything and then make something, you know. But they made it work, and I had some regulars that came. I called them my utility people, because they kept the lights on and stuff on all the time.

In 1994, my husband began to have a problem with his heart. They diagnosed him as a diabetic. He never had a problem with his health. He had diabetes and a heart problem. He had a slow heartbeat and, unbeknownst to me, his doctor told him it was cardiomyopathy, which is irreversible heart failure. He knew this and did not tell me this. So from ‘90 to ‘95, he worked the bar, and then he’d begin to slow down and get kind of sick.

I was here one night. I went home. He said he didn’t feel good, so he didn’t come to the bar, and I went home, and I had fixed dinner and everything, and he didn’t eat. I said, ‘Well, what was wrong with the food? You didn’t like it?’ I didn’t get a response, and then I heard a weird noise. Have you ever heard a person die, and they make a loud, like a gurgling sound? And I went in there and I thought, ‘What in the world is that?’ I looked, and he was laid back and had this glazed look. I shook him, and there was no response, so I called 911. It didn’t take them long to get there. They came in full force, and they tried everything. They tried the electric shock and everything. They said, ‘Well this is not working, and we’re gonna take him on to the hospital.’ They went to Jewish.

I called my son, and he met me at the hospital. Thank goodness my son was there with me. They told me that as soon as they got him stable, they’ll let us go back there. We sat in that waiting room for an hour, just waiting. After a while, I’d told my son that something was wrong. It was taking them too long. So we went up to the desk, and the guy told us that the chaplain was getting ready to come out and talk to us because my husband didn’t make it. It was a low blow. You know how a balloon loses its air after it’s been popped? That’s how I felt. He was gone.

My husband told me that if anything happened to him, to get rid of this place. Everything was going so well, and I didn’t have anything else to do, and I was in love with this place. So I was like, ‘Let’s try to keep it going.’ So for almost two years, I ran this place by myself. I’d come in at 2 in the afternoon to 2 in the morning. I had a girl that helped me during the day, and then I was here. I didn’t have anything else to do, you know, and it helped me get through it. I was married for like 42 years to my husband. And then for him to go like that was just something that I didn’t plan, but we survived it. So from like ’95 up until now, I’ve been in here every night, and I think it helps keep me young.”