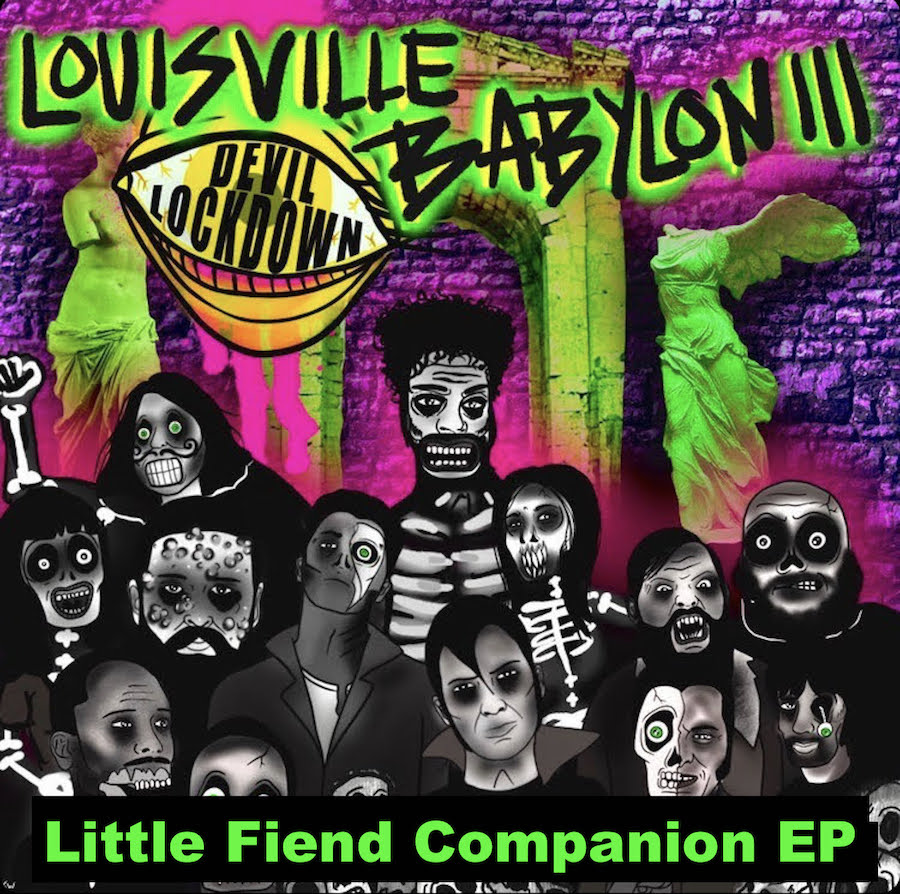 Even though he’s in grad school in another state, John King decided to release a new version of Louisville Babylon, a once-every-13-years compilation of local artists covering songs by the Misfits. While he’s crunched on time, King said he knows that the coronavirus has ripped away a lot of opportunities for musicians, so he figured this project would help repair some of that damage.

“Out of nowhere, shows were canceled, regular band practices were canceled, and that sort of camaraderie and creative outlet that comes not only from playing live, but also privately with friends, that disappeared,” said King, who has played in numerous Louisville bands through the years. “And this gave a great opportunity to regain some of that.”

Louisville Babylon III: Devilockdown will be released on Oct. 2, but a teaser EP — featuring three songs from the album — will be out this Saturday, Aug. 29 on Bandcamp. The free, three-song EP features Misfits covers from Natalie Felker, Rat Bastards and Golden Dead. The full-length album that will follow in October will also feature Dahm Majuri Cipolla, Cobra Jet (members of Planetary Overdrive), Drift City, The Excuses, Eyeball,  Hawks, Horseless, John King & Jessica Bailiff, Prayer Line, Pardieu, Team Blood (members of Team Totoro), Tender Mercy, Season of the Witch and Yellow Cellophane. All songs were recorded between March 1 and June 1 during quarantine.

King said that he was undecided about whether to keep alive the tradition of the Babylon comp, but his friends’ posts on social media inspired him to once again put it together: “I was scrolling through Instagram in March, and all of these artists were putting up videos of them covering songs, and I was like ‘Oh man people are doing this sort of thing anyway, so why don’t we make it a community project?’”

The first Louisville Babylon was released in 1994 by Analog Distillery. It featured storied bands such as Endpoint and sold for $6.66 as a cassette tape at ear X-Tacy. King played on that first compilation as a teenager.

“For my very first turn as a musician to be on a compilation with my heroes — Rodan, Crain — was a huge deal,” King said.

In 2007, 13 years after the first compilation, King ran into a bunch of local musicians at a bar when they were home for the holidays. That night’s conversation led to Louisville Babylon II, which King released on his label, Louisville Is For Lovers. Fast forward another 13 years, and 2020 is seeing the third installment.

“Early on in the COVID outbreak everyone was dismayed, locked at home, feeling some sort of despair,” King said. “And I thought, ‘Well, it’s the 13th anniversary again — let’s give a project to Louisville artists to have something to work on and look forward to.”

Something that changed this time around was how quickly the musicians sent in their submissions. Within two weeks, King received about 70% of the songs. Someone even sent their song the day after it was assigned.

“Usually, after three months, I’m begging artists, but time around, in a flash, I’m getting all of these great recordings,” King said.

King said that he was also surprised that, for many artists, it remained a collaborative effort with several songs featuring multiple musicians who used technology during the pandemic to create together — doing things like sending working files back and forth and using programs such as Zoom to work out songs.

“I was surprised a lot of the artists choose to do full band recordings,” he said. “Some of it was really unique in the way they were able to do it.”

Natalie Felker, whose cover of “Die, Die My Darling” will appear on both the advance EP and the full length, said she was interested in the song because of the ways she could adjust the structure and meaning. Her slowed-down, synth-heavy version is an innovation reimagining.

“I’m not that familiar with The Misfits catalog, but I was drawn in by the juxtaposition of the threat coupled with the term of endearment in the title,” Felker said. “I feel like the campy horror movie trope of the murdered woman is a little tiresome, especially when you consider how much violence there is against women in real life, or how much exponentially higher that is for trans women, or how this kind of misogyny is tide to a patriarchal culture of toxic masculinity. I thought it would be interesting to reimagine it from a femme perspective. Less of an aggressive threat, more of a dramatic invitation.”

Like King, Felker said the compilation was a good way to keep people connected during a time when most of us have been somewhat isolated.

“We’re fortunate to have someone like John who’s been producing compilations like this for decades featuring Louisville bands,” she said. “They’re a good opportunity to have fun, be creative and build community.” •