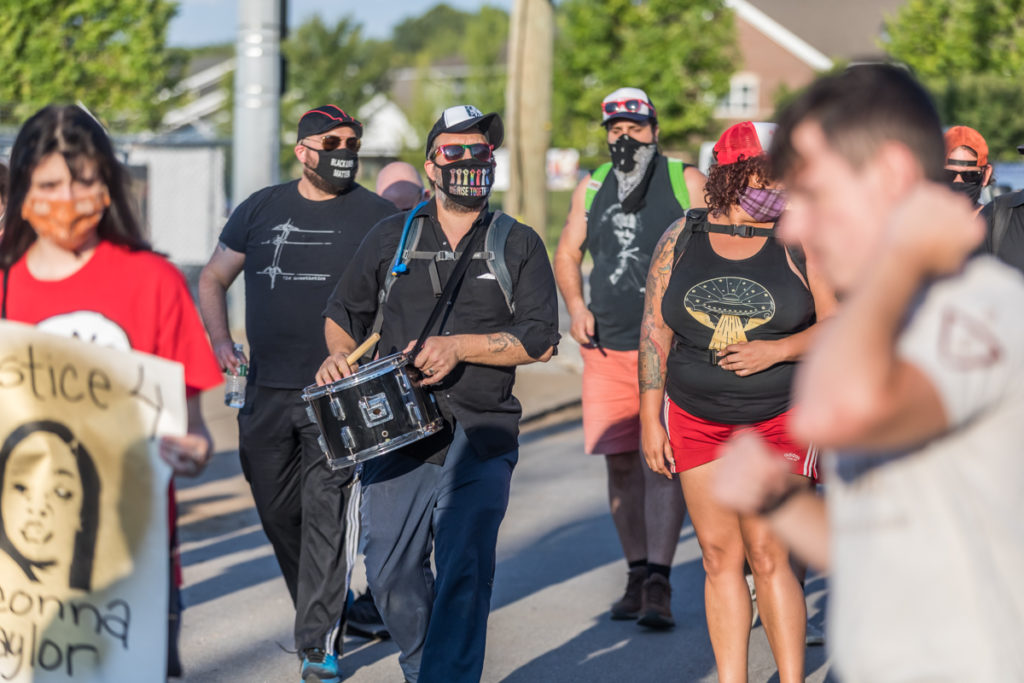 Protesters in the march brought a variety of percussion instruments. | | Photo by Kathryn Harrington.

Lamar Cornett, a drummer in several Louisville bands, was a little dismayed that he wasn’t seeing more members of the local music scene at the downtown protests against police brutality. So, last Friday, he helped organize Out Of The Bars, Into The Streets, a two-mile walk from The Highlands to the ongoing protests at Jefferson Square Park that attracted about 100 people from the Louisville music community.

“A lot of us are A: upset at what happened to Breonna Taylor, and B: frustrated with our communities lack of response,” Cornett, who is 39, said. “It kind of started on social media. Someone posted that the whole Louisville music scene needs to get together and show up and show out, because we are a huge part of this town too. And we’re just as pissed off as everyone else.”

Out Of The Bars, Into The Streets was a night of chanting, singing, drums, horns and other musical expressions that took place on the 72nd consecutive day of downtown protests, with a few impromptu performances during a healing ceremony. And now the event will take place every Friday.

Cornett, who drums for In Lightning and many other projects, said that he believes a lot of people in the music scene may have wanted to get involved in the protests earlier, but previously haven’t because they might have felt overwhelmed, and the goal of “Out Of The Bars, Into The Streets” is to create an easy avenue to participate.

On Friday, Cornett got the response he was looking for, with scene fixtures across multiple generations showing up.

A little after 7 p.m., Cornett and co-event coordinator Kara Rexx took to the mic to do what musicians do best: rehearse. The crowd practiced the chants planned for the route. Fifteen minutes after the scheduled start time, protesters began their march — not bad for the typical lack of punctuality in the music scene.

Phil Najjar, of Vox Populi and the musical collective The Human Project, felt like he had to be there. “My partner is a POC, many of my friends in the music community are POCs, most of the community I deal with are POCs, so I would be a shitty ally if I wasn’t,” he said.

When asked what he hopes the protests accomplish, Najjar said: “Three cops locked up, defunding of the LMPD that’s already got an inflated budget, and you know, better cohesion in the music scene.”

During the march, a caravan of vehicles served as a physical boundary and rear guard, a mostly successful endeavor.

The march took place before Louisville police issued a statement Sunday that officers will begin enforcing laws relating to protesting in the street: “All pedestrians must stay out of the streets — staying on sidewalks and following all laws for pedestrian traffic” and “Cars and pedestrians will not be allowed to block intersections for any length of time,” the police said in a Facebook post.

“Participants who refuse to comply with any law or lawful order will be eligible for citation and/or arrest.”

The police claimed they were concerned about the protesters’ safety. “We have seen increasingly unsafe behavior, including an escalation in aggressive behavior over the past week or so.”

On Friday, as the marchers moved toward Baxter Avenue and Jefferson Street, a motorcyclist became impatient, breaking into the crowd. Protesters parted to let them through, with cars, cyclists and marchers forming a tight rear guard to mitigate any further disruptions to the formation. The line reformed stronger and ended up both protecting protesters and amplifying their voices with a chorus of car horns.

Adding to that big noise, drummers and percussionists kept rhythm for an ad hoc marching band, singing anthems against injustice. Guitarist and bassist Mez Hendrix brought his drum to help keep the pace.

“I think my rhythm was a little off, because it was my first time bringing it out, but I just thought we should make as much noise as possible,” he said.

Hendrix has been a part of several different marches throughout the protests and said that its important to fight against injustice and inequality at every opportunity because it’s time that things change.

“We just want justice for everybody,” Hendrix said. “We want everybody to be happy and at least comfortable, and have the same chances and the same opportunities. I’ve grown up my whole life around people of color and watching them get beat down for their whole lives, their whole, basically, existence it seems.”

Once on Jefferson Street, marchers moved toward what some protesters have renamed Injustice Square, chanting and raising a beautiful hell en route. Cyclists and caravaners blocked intersections to protect protesters in vulnerable areas. There was a palpable energy as the musician group met up with co-marchers in the LGBTQ community at Second Street. Cheers were all around, the soft throb of golden age hip-hop emanating from a Bluetooth speaker in the backpack of a protester.

There were no visible police on rooftops downtown, at least around 8:30 p.m. Friday night, and no low drone of rotors as helicopters hovered. One activist took the megaphone, leading a conversation about systemic injustice, and there was music all around, as impromptu performances broke out.

Out with her family, Nikki, a musician and activist who didn’t want to give her last name, said she has been to protests throughout the last several months. Like most in attendance, Nikki said she seeks justice for Breonna Taylor and changes against systemic injustice. She sees the various marches, from the musicians gathering to the weekly LGBTQ march, as an opportunity to keep the pressure on and raise awareness.

“There is always a core faction here, but this is like a big breath, an expansion,” Nikki said of the addition of the Out Of The Bars, Into The Streets to the protests.

The music scene marches will continue every Friday, with the Aug. 14 event once again starting at 6 p.m. behind the Planet of the Tapes. Cornett wants to continue to build Out Of The Bars, Into The Streets to bring positive attention to the demonstrations.

“We’re not being the criminals and thugs that they’re painting us as,” Cornett said. “We’re just trying to get people to pay attention. We want people to know what’s happening and to make their voices heard, so there can be justice for Breonna Taylor, so that we won’t have to do this again in the future, so we don’t need to keep adding names to that list.”