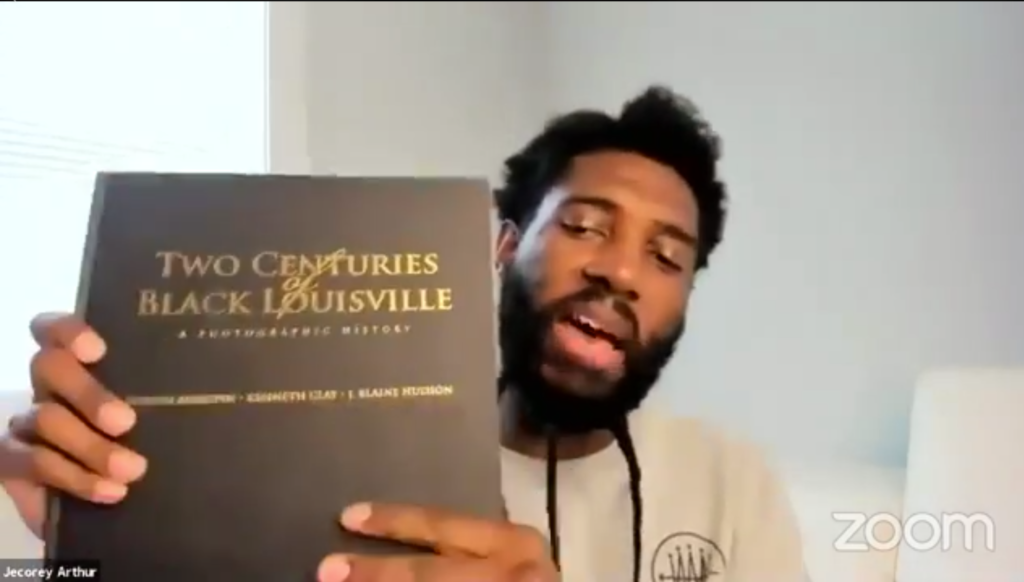 Metro Councilman-elect Jecorey Arthur prefaced his remarks during the Louisville Forum by recommending this book, ‘Two Centuries of Black Louisville.’

The Louisville Forum’s meeting this month engaged elected and business leaders on the question: Can the push for racial justice and a vibrant downtown coexist? The following is an excerpt from Metro Councilman-elect Jecorey Arthur’s remarks. Arthur, who is the youngest person ever elected to the council and a teacher and musician, will represent District 4, which includes downtown.

“Peace, love and justice. You cannot understand Louisville if you do not have this book or you’ve never read this book. It is called ‘Two Centuries of Black Louisville,’ and I will share just a blurb from the beginning of the origin of Louisville ….  [S]tandard history projects the story of the white pioneers into the foreground and pushes the story of the Native Americans into the background. African Americans are usually altogether invisible or have no story at all. I am here on this panel, eventually on Metro Council, on this Earth, to reveal those stories, amplify those stories, and to make sure that some of those stories don’t repeat themselves. It is 2020, two and a half centuries after Louisville was founded, and I can’t believe I’m on a panel asking the question about racial justice and a vibrant downtown coexisting. This panel in of itself is based on the assumption that downtown was never meant to be racially just, and the truth of the matter is that downtown is not designed for us, but it was built by us. Slaves were dispatched in advance of their owners to clear land, plant crops and build houses in Louisville, and by the 1840s, there were slave trade businesses all around this city, and some of those slave pens were located downtown. There was a white settler named William Gibson who described the slave auction on Jan. 1, 1848, and he said that Market Street was the scene of this American evil, and when you look west of downtown, in my neighborhood Russell, 91% Black, 82% of the land is owned by people who don’t even live in the neighborhood, 52.7% of us live in poverty, or when you realize that 78.3% of the unsheltered families in this city are Black, or when you go to the local governments open data site and LMPD doesn’t even have Breonna Taylor’s name listed as someone who was involved in officer-involved shootings, you realize that, just like the 1840s and before, we still experience this American evil in Louisville, Kentucky, and I look forward to talking about that today in this forum.”

“You can’t protect the city if you don’t progress the city. There is this ongoing narrative that the protesters are wild animals, and I am here as one of the protesters to say that’s not the case. These protesters are mothers, students, citizens of a city that we all love, but the issue is the city hasn’t always loved us back. These protests have a purpose. They are not just happening for the sake of happening. Around the same date Aug. 1, 1967, Dr. Martin Luther King came to Louisville, spoke to hundreds about fair housing, organized in the same way that people and protesters are organizing right now, and that fall we elected a new board of aldermen who eventually went on to influence people like [state] Sen. Georgia Powers and influence state law to make the Kentucky Fair Housing Act something that came into fruition. So, these protests have a long-term justice purpose. They are not just protests for the sake of protest, but we have to keep in mind, and I will use an African proverb to bring this point home: ‘A child who is not embraced by the village will burn it down to feel its warmth,’ and you can take that in a number of ways, but when you have a group of Louisvillians, and I mean Black people who descend from slavery — not people of color, because before when Louisville was founded in 1776 it was largely Black and white and the natives that eventually were forced to flee, it was Black and white. There were no other people of color. It was just us for decades and decades and decades. We were impacted by the colored-only sign. We were impacted by Jim Crow laws that discriminated in housing, education, insurance, employment — the list goes on. So Black Americans who descend from slavery have really been on the bottom of a city that we built for so long. So everything happening between the pandemic and the protest is really just those centuries imploding on themselves. Outside, zooming out, America 400 years, but in Louisville really just over two centuries. So, I truly believe that if we’re going to talk about protecting the city we have to talk about how do we progress the city beyond just the status quo. Because protecting just means clutching our pearls and keeping it the same old way and that doesn’t work anymore in 2020.”

[Arthur was asked what the city can expect after the attorney general decides whether to charge the officers.]

“That African proverb about the child who is not embraced will burn it down to feel its warmth isn’t literal. It’s about understanding the system, and when we think about systems of white supremacy, oftentimes we celebrate with Band-Aids, whether a small grant to Black nonprofit or statues being torn down. … We need to tear down those systems. That includes changing laws. That includes long-term fixes that are going to make sure we don’t see this happen again 50 years from now like we saw happened 50 years ago like we see happening today. I can’t say and guess the future of what’s going to happen if [state Attorney General] Daniel Cameron turns around and comes back and says they are not going to be charged, but I will say we as a collective, not just Black Louisville — Kentucky, brown Louisville, yellow Louisville and everybody in between — we have to realize even if Daniel Cameron does come back and say these officers are going to be charged, and they go to the, go to court, that doesn’t change the poverty level in this city, that doesn’t change the homeless, homelessness in the city, that doesn’t change discrimination that is still embedded in the city. That in of itself is still a Band-Aid, so I hope from my new position and from working with all of the voices that are on this virtual call right now, we can have a deeper discussion outside of firing those officers. Because that is… I would say four-months justice, but we need to be thinking about 400-year justice, and it’s really bigger than Louisville. Louisville is a part of a fabric of oppression, but we have a responsibility here as locals to address what we can locally, but we need to pull in partners and form a coalition across the country that is going to have long-term impact.”