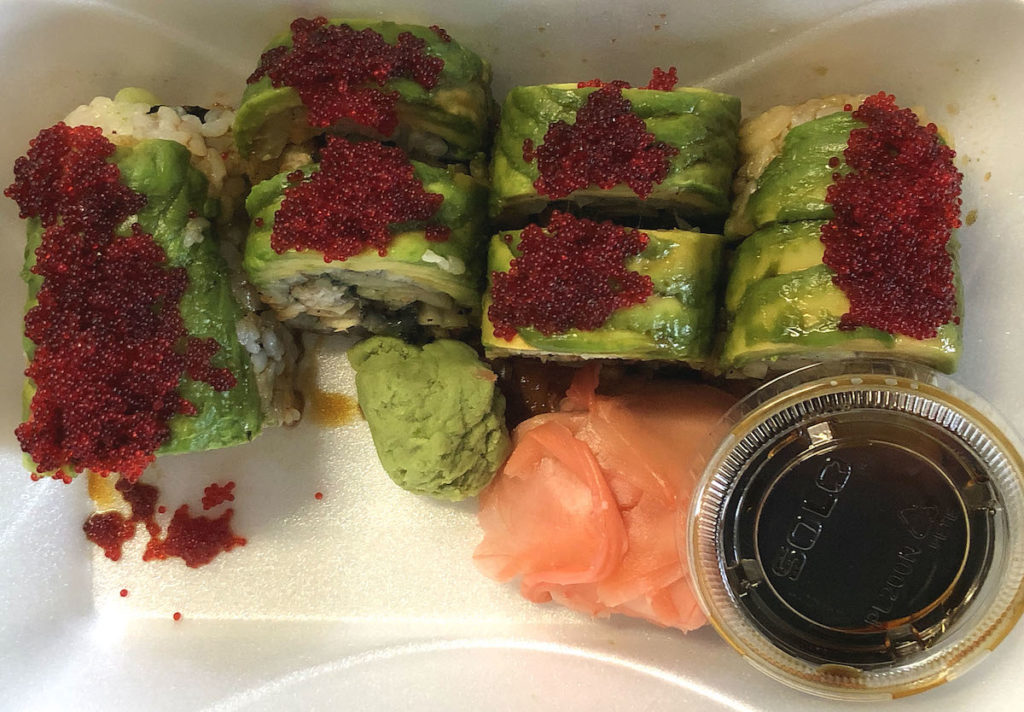 The dragon roll at ToGo Sushi places eel and cucumber within a roll topped with avocado and tobiko, flying fish roe. | Photos by Robin Garr.

One of the great pleasures of sushi for me is the opportunity to sit down at the sushi bar, admire the artfully arranged rows of beautifully cut seafood and fish and talk with the chef about what’s interesting and good.

But I have to be honest: During the pandemic, the idea of joining a few neighbors and a chef or two in such close quarters does not appeal, not even with masks and social distancing in play.

Happily, many of the city’s sushi bars offer a takeout option. One stands out: ToGo Sushi, as its name implies, does most of its business — you guessed it — to go.

Thanks to the drive-through window that this 3-year-old Lyndon eatery inherited from its predecessor, Bruster’s Ice Cream, you can go through the drive-through line that circles the little red-and-white building to pick up a phoned-in order or make your choice through a fast-food-style speaker.

Although ToGo’s focus is takeout, there is a short sushi bar and a few tables inside, so, in theory, you could go in and pull up a seat in front of the chefs and say: “feed me.”

But drive-through seems to be a better idea right now, and our lunch order proved well-made and tasty. The price for four rolls and a salad ended up under $40, which isn’t bad for sushi. Indeed, although sushi isn’t known as cheap eats, ToGo’s prices are more competitive with Kroger sushi than it is with the city’s fancier sushi shops. Connected through ownership with Louisville’s Oishii Sushi and Samurai Sushi & Hibachi, ToGo brings a solid heritage to its sushi game.

The menu consists entirely of maki sushi (rolls) and an array of Japanese-style appetizers. For the familiar nigiri sushi (bites of fish formed atop a ball of rice) you’ll have to look elsewhere.

You’ve got plenty of rolls to choose from, though, nearly 70 of them, subdivided among specialty rolls, regular rolls, vegetable rolls, cooked rolls and deep-fried rolls. Enhancing the value further, these rolls are big, perhaps twice the size of grocery sushi.

The house salad ($2.50) was simple but pleasing, perfectly crisp iceberg lettuce and carrot shreds, with a tub filled with that delicious creamy Japanese-restaurant ginger dressing alongside to use as you like. I liked using it all.

The rolls and salad all came out ToGo’s window at or near room temperature. In retrospect they might have been even more appetizing if we gave them an hour in the fridge before serving. But that’s picky, as they were quite good as is.

Like all the rolls at ToGo Sushi, the basic tuna roll ($7.95) was oversize and packed full, neatly arranged in a plastic foam box with a ball of wasabi, a pile of piney, pink, pickled ginger and a little plastic tub of soy sauce. Exceptionally large cubes of fresh dark-red tuna and chunks of avocado were surrounded in “inside-out” fashion with nori seaweed, then perfect short grain sushi rice. The tuna wasn’t as firm as I’ve ever eaten, but not mushy and was definitely fresh and clean.

The dragon roll ($11.95), an eel specialty, was even bigger than the tuna roll, but cut more thin. Also an inside-out roll, it contained cooked eel with its skin, cucumber and avocado, surrounded by nori and rice and topped with tiny orange, pop-in-your-mouth tobiko (flying fish roe). It was rather loosely wrapped and hard to pick up with chopsticks or fingers, but the flavor forgave mere technical issues.

Pretty veggie rolls ($7.95) were artfully topped with sliced avocado arranged to display alternating stripes of bright and dark green. Within the inside-out roll was crisp, barely cooked asparagus and fresh cucumber. It was hard to decide whether to enjoy its natural, simple flavors or kick it up with soy sauce and wasabi, so did a little of both.

Tofu roll ($6.50) was another oversize, thin-cut roll, filled with big cubes of pan-fried silken tofu and ample chunks of avocado. This one was an exception to the inside-out rule, made with the black nori on the outside of the rice. The flavors were subtle and appealing, but like the dragon roll, it was loosely constructed and difficult to impossible to pick up without the insides falling out.

Overall, it was a good experience, good enough to consider going back for more. Lunch for two totaled $39.06, plus an $8 tip. •