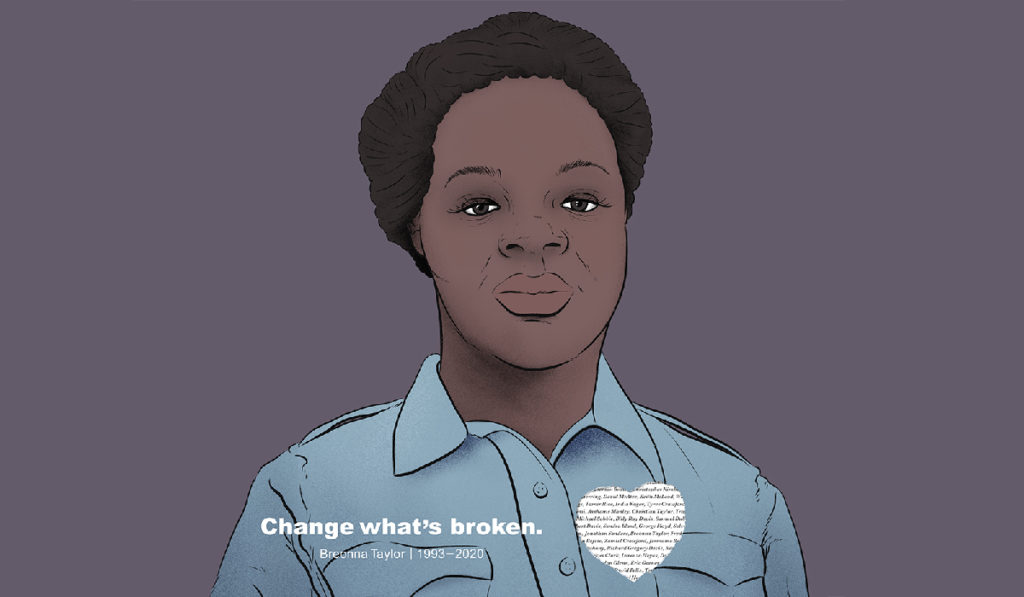 #JusticeForBreonna by Jon Shaw and Mightily.

LGBTQ for Black Lives
KFC Yum Center
Free  |  7 p.m.
There was no Louisville Pride parade this year, but members of the LGBTQ community are going to march down Louisville’s streets in support of Black lives. “We want to honor the struggle for justice for Black lives, just as our struggle for justice for our lives exist,” its organizers wrote. They encourage participants to be “gay as hell” and to “bring the names of our siblings murdered by police.” The march will start at the KFC Yum Center at 7:30 p.m. (be there by 7) and travel to “Injustice Square Park,” officially known as Jefferson Square Park.

Call to Action — Jeffersonville Protest
Clark County Courthouse
Free  |  11 a.m.-2 p.m.
Indiana continues to protest for Black lives, too. On Saturday, protesters will march through Jeffersonville, starting at the Clark County Courthouse. Their demand is justice for Breonna Taylor, who was shot and killed by Louisville police in March, as well as for Malcolm Williams, who was shot and killed by an Indiana State Police trooper during a traffic stop in Jeffersonville in April.

100 Women Stand’n In Solidarity
Jefferson Square Park
Free  |  3 p.m.
Colie Rodriquez’s goal for this Justice for Breonna Taylor march is to get 100 women to participate. Rodriquez, host of the “Pretty Girl Chronicles” podcast, organized this march, which will start at Jefferson Square Park and end at the Big Four Bridge where participants will spell out Breonna Taylor’s name. The 100 Women protest will be filmed for a music video for “#SayHerName,” a song by Stook, B Simm and Hurra Season. Watch out for potential road closures possibly surrounding Jefferson Square Park and downtown, as the Not Fucking Around Coalition, a Black militia, and the Three Percenters, a far-right militia, plan to be in Louisville that day.

The Black Moth Virtual Series
Online
$10 suggested donation  |  7 p.m.
Just like the Moth StorySLAM, the Black Moth Series will give a stage to regular people who want to tell stories about their lives. However, while the StorySLAM’s theme varies each month, the Black Moth Series will always ask for the same thing: tales about being Black in America. Once you make your donation, you’ll receive a link to the virtual event. If you can’t make it on Saturday, there’s another show on Sunday at 3 p.m.