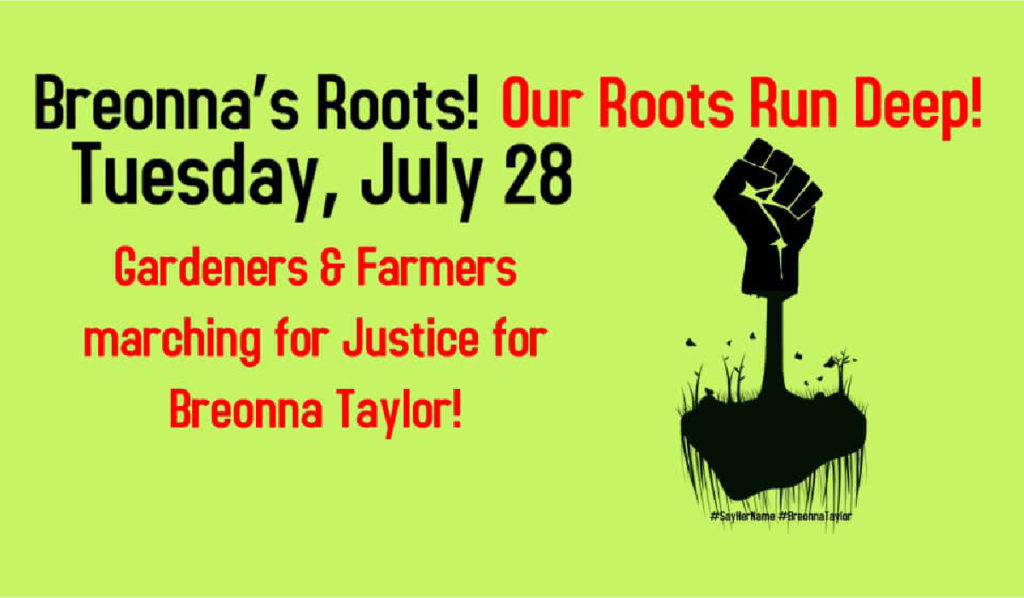 Dismantling Racism Monday Study Circle
Zoom
Free  |  6:30-8:30 p.m.
Unity of Louisville church is offering a new study circle on increasing racial awareness. Taking place on alternating Mondays, Tuesdays and Sundays, its goal is to raise your racial literacy and to “inspire action for racial equity in our community.”

Breonna’s Roots! Our Roots Run Deep!
Fresh Start Growers Supply
Free  |  6 p.m.
It’s time for gardeners and farmers to show their support for Justice for Breonna Taylor. White Radicals Against Thoughtless Hate and Breonna’s Roots are organizing this march, which will start after the Phoenix Hill/NuLu Farmers Market at Fresh Start Growers Supply and end at Jefferson Square Park.

Black Leadership in the Public Sector
Facebook Live
Donations accepted |  4 p.m.
An intergenerational group of leaders discuss “leadership and their roles in law, policy, and place-making” in this panel organized by Actors Theatre of Louisville. Panelists are Tanisha Hickerson, Charles Bradley, and Sam Aguiar. Any donations made go to Roots101: African American Museum.

LFS Filmmaker Forum: Jeffrey Reddick
Zoom
Free  |  6 p.m.
Jeffrey Reddick kicked off the “Final Destination” series by writing the first movie and executive producing and writing “Final Destination 2,” making him the first person of color to start a billion-dollar horror franchise. He’s also from Kentucky. The Louisville Film Society has invited Reddick to talk about his experiences in the film industry and to answer questions in this online, Zoom forum. Reddick’s directorial debut, “Don’t Look Back” comes out this fall. Register for the forum and submit your questions now!

Weekly Mamma’s March
Brook Street and Muhammad Ali Boulevard
Free  |  6 p.m.
Last week’s march for Black lives by local moms is now a weekly occurrence, along with the recent kid and LGBTQ marches. Participants will meet at Brook Street and Muhammad Ali Boulevard at 6 p.m. and walk to Jefferson Square Park “for George, for Breonna, for Tamir, for Trayvon, for every child we have lost.”

Be Real Black For Me
Facebook Live
Free  |  7-7:30 p.m.
Actors Theatre Direct Artists-in-Residence, Ken and Christina Acosta Robinson will perform their version of the 48-year-old song “Be Real Black for Me,” which encourages Black people to be their full selves. Their performance premieres on Facebook Live and will be available afterward on Facebook, YouTube and https://www.actorstheatre.org/direct.

Donations for Protesters
Times and locations vary
If you can’t attend protests or you want to do something in addition to protesting, consider donating supplies or funds. Parents for Social Justice are collecting items to sustain the occupation of Jefferson Square Park, which can be found on Amazon and dropped off at the park or Bridge Counseling and Wellness. Shameka Parrish-Wright with the Kentucky Alliance for Racist and Political Repression is also collecting money for direct aid for protesters, supplies, the Kentucky Alliance and the Bail Project. Or, sign up to make a meal for the Louisville Street Medics, who have been providing medical assistance to protesters throughout the demonstrations.

Show Your Solidarity: Hunger Strikers for Breonna
Anywhere
Free  |  Any time
Give up something in solidarity with the strikers who are refusing to eat until Breonna Taylor’s killers are fired from the Louisville Metro Police Department and have their pensions revoked. It can be dessert, smoking or entire meals. Or, here are some other ways strikers say you can support them: tell a story about “what moves you,” remember or celebrate a loved one, share the Hunger Strikers for Breonna Facebook page, or donating to the cause.