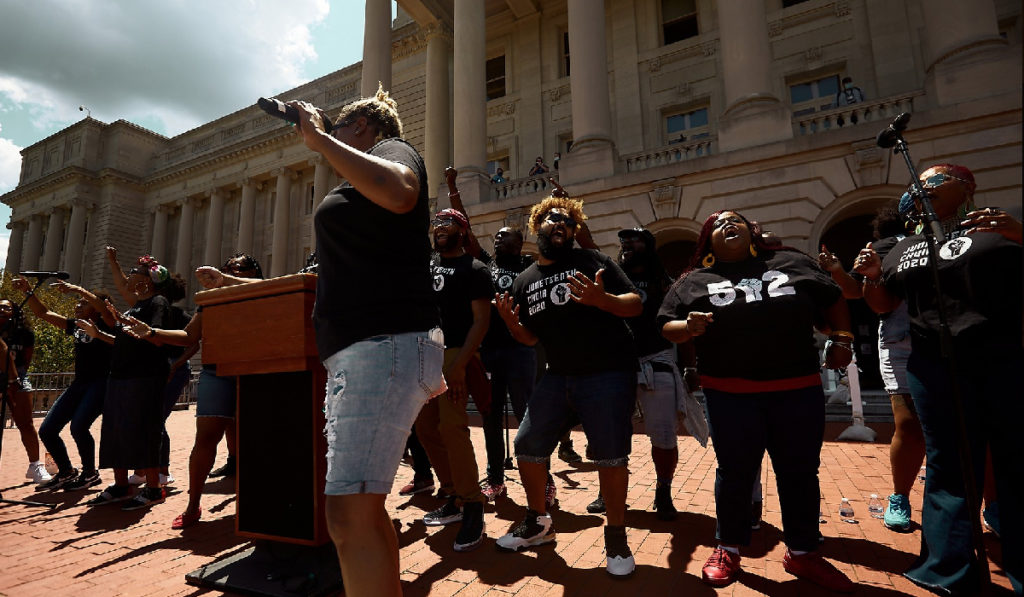 Park Yoga for a Cause
Big Four Lawn
Donation-based  |  6-7 p.m.
Take a moment, breathe deep, stretch and donate some money to Change Today, Change Tomorrow, a nonprofit that addresses the needs of Louisville’s Black community. This weekly yoga series benefits a new group each month.

Direct Action from Until Freedom
Louisville
Free  | Noon
The national organizing group Until Freedom is holding a direct action in Louisville, meant to demand justice for Breonna Taylor. Registration for the action is over, but you can still donate for bail and supplies or volunteer to help with coordination, supply runs or jail support. Until Freedom hosted the Frankfort rally for Breonna Taylor in June, and it is asking for actions including that the officers involved in her shooting death to be fired and charged and for no knock warrants to be banned across Kentucky.

Let’s Talk Abolition
Zoom
Free  |  5:30-6:30 p.m.
Louisville Showing Up For Racial Justice tackles abolition and defunding the police. Learn about what it is and how to take action.

Vigil Supporting Latinx Family Being Racially Targeted
511 Woodlake Drive
Free  |  5:30-6:30 p.m.
LSURJ hosts a vigil for the Pineda family, whose Lake Forest home driveway has been vandalized with racist graffiti. A neighbor has been issued a criminal summons for the vandalism. At the vigil, sign a letter to the Lake Forest Community Association.

Black Lives Matter: A Women’s Perspective
Zoom
Free  |  Noon-1 p.m.
Panelists discuss how racial inequality “specifically affects women, families, and neighborhoods and what we can do to bring about that change.” Krystal Goodner, the director of communications at Simmons College of Kentucky moderates this discussion featuring entrepreneur and activist Alice Houston, VoteNowKY Chair Keshia Swan and ACLU of Kentucky policy strategist Jackie McGranahan.

Sean Smith
Planet of the Tapes
$5-$150  |  7:30 p.m., 10 p.m.
Comedian Sean Smith is the first person to headline Planet of the Tapes, Louisville’s new comedy lounge/bar/movie rental business. Smith is a Louisville standup who has performed alongside Nick Cannon, Jay Pharaoh and John “Pops” Witherspoon. He’ll be joined by comedian Melissa Doran. Tickets are sold by the table (with one table per household) for social distancing purposes. Or, you can watch from home by purchasing a $5 ticket.

UNTIL THE END OF THE MONTH

Local artists Amy Elswick and John Mahorney have created a Black Lives Matter cycling jersey so you can show your support for the movement while you ride. The shirt also contains names of Black-owned businesses. Profits will be donated to the Kentucky Alliance Against Racist and Political Repression.