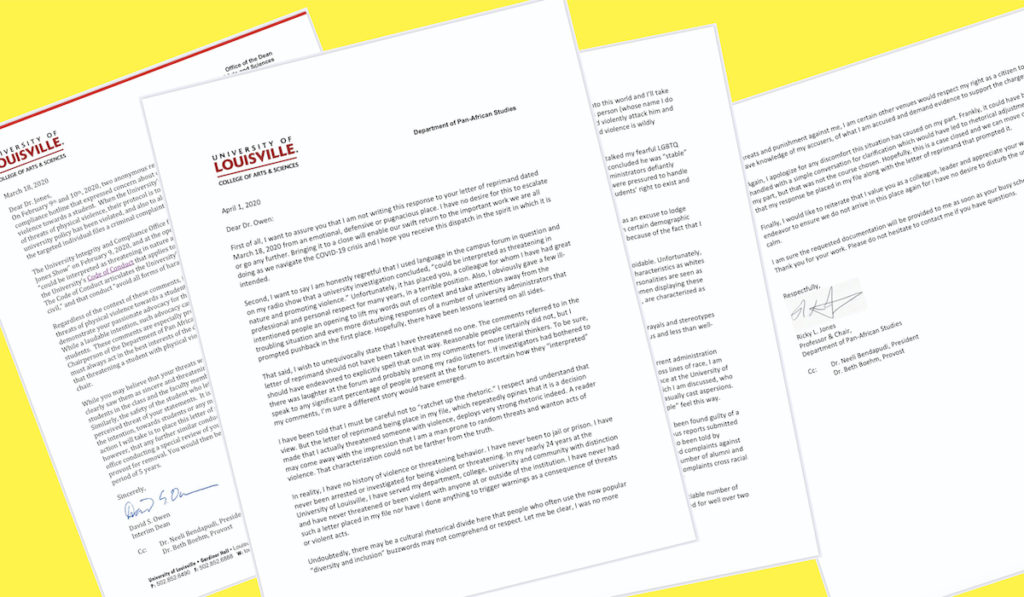 Imagine that you are accused of a possible crime anonymously. You do not know you are being investigated. You are not asked to defend yourself. You are not allowed to question your accuser. You are given no route to appeal.

If that sounds like something out of the 1600s, you are right — It is called a Star Chamber, an English court from that time that is now synonymous with secret, legal proceedings designed to squelch political dissent. That’s what seems to have happened to Ricky L. Jones, chair of the Pan-African Studies Department at UofL.

Jones was accused of threatening a student who had passed out anti-gay pamphlets at an LGBTQ studies course at the school. (The Courier Journal reported UofL later issued a no-contact order to the student.)

After the pamphleteering, Jones on Feb. 9 used his podcast, “The Ricky Jones Show,” and then a forum, to address the student, whom he does not name (and could not have named because Jones does not have one).

“I’ve got a message for you, if you’re listening, to this student, or any other student or any other person who wants to come harassing somebody: Try that. Come to my class with that.” he said on the podcast. “Come to one of my classes with that. I will drag your ass into my class, me and my 50-some-odd students will stomp you, beat you within an inch of your life, then drag you out of the room and deny that we did it.”

Not tactful. But, Jones is his plainspoken, uncomfortably honest and, yes — sometimes hyperbolic — on social media, in writing (sometimes on these pages) and in person.

In an April 1 letter to the university, Jones wrote that he regretted that people thought he was threatening the student. “ … I want to say I am honestly regretful that I used language in the campus forum in question and on my radio show that a university investigation concluded ‘could be interpreted as threatening in nature and promoting violence,’” he wrote.

“To be sure, there was laughter at the forum and probably among my radio listeners. If investigators had bothered to speak to any significant percentage of people present at the forum to ascertain how they ‘interpreted’ my comments, I’m sure a different story would have emerged.” Or, if they had talked with Jones.

“Undoubtedly,” he wrote, “there may be a cultural rhetorical divide here that people who often use the now popular ‘diversity and inclusion’ buzzwords may not comprehend or respect. Let me be clear, I was no more delivering a threat to anyone than a black mother who says, ‘I brought you into this world, and I’ll take you out’ intends to kill her child.”

You get a sense of what UofL thought, though, from the reprimand letter Jones made public, from Interim Dean of the College of Arts & Sciences David S. Owen on March 18. He was warned that “further similar conduct — whether serious or rhetorical” could result in Jones being barred from a leadership position for five years. “Regardless of the context of these comments, it is unacceptable for a faculty member to make threats of physical violence towards a student. I understand this was likely an attempt to demonstrate your passionate advocacy for the safety of your faculty and students in the class.”

Now, back to why UofL might have pressed this secret investigation. He is often a harsh critic of UofL, including for its treatment of minorities and LGBTQ people. Jones contends in his letter that the investigation is “ … largely because of the fact that I have ceaselessly championed issues of consequence to marginalized people.”

“Interestingly, on more than one occasion to date, upper-level members of the current administration have intimated that, unbeknownst to me (allegedly because people fear me), across lines of race, I am regarded as a widely disliked bully who is a problematic and ‘threatening’ presence … ”

“Unfortunately, we still live with the reality that black people who display the same leadership characteristics as whites and others are regarded differently. Non-black leaders with more aggressive personalities are seen as ‘no-nonsense, hard-charging, passionate, tough and results-oriented.” But, he wrote, “Bolder black men, more often than not, are characterized as ‘scary’ or ‘threatening.’”

Jones wrote that he was told by a UofL leader that more than 75 faculty members made complaints in the case. “Honestly, it is hard to believe that even if this estimate is true, it includes an appreciable number of black people — the population with whom I have made a common cause and defended for well over two decades,” he wrote.

Again, Karman declined to comment. We also asked: “If you cannot comment on specific personnel issues, can you explain the university policy for investigating such claims? What opportunities are there for the accused to mount a defense and an appeal? Why aren’t they notified they are under investigation? Do the accused ever get a chance to question their accusers?”

We received a copy of the “Official University Administrative Procedure.” It did not answer those questions.

Maybe Jones will get answers. He and his lawyer have asked for the investigative materials, the names of his accusers and the “names and specific situations in which I have been personally threatening, bullying, etc., to accusers outside the university — alumni, board of trustees members, and others.”

On Tuesday, Jones told LEO he has received only the investigative report, not the other information. “That seems to be their approach. Do these things and then not answer. Seems rather totalitarian and destructive to me.”