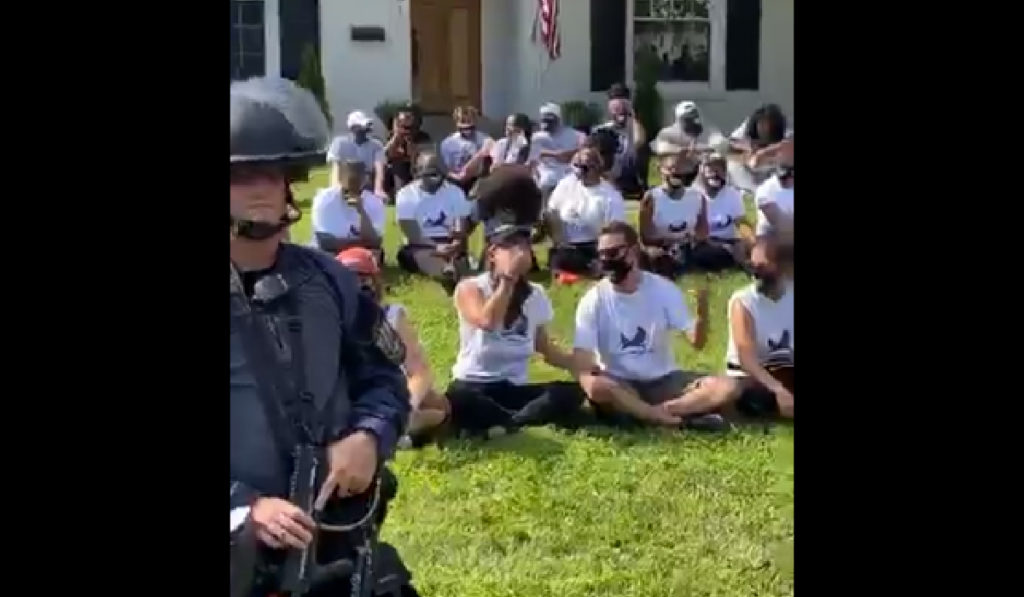 Protesters “say her name” every day during demonstrations and on social media posts all over the country, as they did in Louisville on Tuesday when the national social justice organization Until Freedom staged a sit-in on Attorney General Daniel Cameron’s lawn.

But for months after police had shot Taylor to death, many Louisville residents didn’t know her name, even though local media reported on it when it happened March 13. That was the same day when Keturah Herron was told to start working from home for her job as a policy strategist with the ACLU of Kentucky because of the coronavirus.

The pandemic seemed to have swallowed Taylor’s story, that is, until national activist Shaun King posted about Taylor on May 10, demanding police accountability for the raid on her home — a raid that didn’t turn up the drugs police were supposedly looking for or the suspected dealer who was allegedly their main target.

The next day, the nationally prominent civil rights lawyer Benjamin Crump, who has handled cases for Trayvon Martin, Michael Brown and Ahmaud Arbery, joined the lawsuit that Taylor’s family had already lobbed at the officers involved.

And, soon, in addition to King, national celebrities began to flex their prominence to push for action in Taylor’s case, including Beyoncé. Media outlets across the country have covered the story; The New York Times and FX recently announced a one-hour TV documentary that will look into her life and death. And, national groups such as Until Freedom have started organizing in Kentucky. First, Until Freedom held a rally in Frankfort in June. On Tuesday, hundreds of people participated in their direct action and 87 were arrested, some of them celebrities.

All of this national attention can uplift local organizing efforts by providing enormous resources and can place profound pressure on local governments, but it can also overrun grassroots groups and hijack their agendas if they aren’t consulted, some local leaders say.

“I think that it’s beneficial,” said Herron, who is also a part of Black Lives Matter Louisville. “You know, at the same time, I also think that it’s important that national folks do take the lead of local demands, of figuring out what our local organizers are demanding.”

And, sometimes national leaders take credit for changes that local organizers were instrumental in securing.

Take King, for example. Herron acknowledges that his continued social media posts have been “integral” in lifting up Taylor’s case. But, he also made a social media post after no-knock warrants were banned in Louisville, saying “we did it,” with the logo of his organization, the Grassroots Law Project.

King, who is from Kentucky, has not replied to a request for comment.

Herron said she worked 16- to 18-hour days on what was dubbed Breonna’s Law, which banned no-knock warrants in Louisville. She collaborated closely with Council Members Barbara Sexton Smith and Jessica Green. It passed after two weeks of nonstop protesting, mostly by locals, in downtown Louisville. King’s organization encouraged people across the country to call and email city officials, asking for “justice for Breonna.” He has said on Twitter that volunteers made 150,000 phone calls and sent millions of emails.

“For me, it’s not about me as Keturah Herron getting credit for it: It’s about the work being done,” said Herron. “But I also think that sometimes it’s unfortunate that that happens. Especially when you look at historically, Black women doing work in the moment — oftentimes, Black voices or Black, female voices are put in the shadows.”

National organizers and figureheads can be a boon to local organizers. They have resources that groups such as Black Lives Matter Louisville don’t, said Chanelle Helm, a core organizer with the group. She said she welcomes their involvement — but only if they’re willing to work with local groups and amplify the same causes.

Black Lives Matter Louisville has had a website up since mid-May, justiceforbreonna.org, detailing changes they would like to see happen in response to Taylor’s death. It asks for the same actions that many national organizers have been advocating for — the firing and charging of the officers involved in Taylor’s shooting. But, it also contains other, more local demands that are often left out of the national conversation, such as the creation of an independent civilian community police accountability council and a new, transparent investigation process. These goals are meant to help all victims of police violence in Louisville, not just Taylor, said Helm. BLM Louisville is also concerned with the power wielded by the local police union, the River City FOP, as well as equal access to resources for Black communities. “We just want to make sure that we’re utilizing the same language and the same type of goals to push for those things,” said Helm.

When national groups and local groups are promoting different ideas, Helm, the establishment (in this case, the city) can see that and use it as an excuse to disregard one group of organizers or both.

Shameka Parrish-Wright, a local activist with The Bail Project Louisville and the Kentucky Alliance Against Racist and Political Repression, said she embraces out-of-town visitors who want to get involved with the movement. She’s been the outsider before — when she and other Kentucky mothers traveled to Ferguson after a police officer shot and killed Michael Brown — and she remembers feeling welcomed by local activists.

Until Freedom already started planning its Frankfort rally when it reached out to Black Lives Matter Louisville about participating, Helm said. She had to tell Until Freedom that they were too busy with elections and asking Louisville government to defund the police to get involved. Neither topic was brought up at the rally, but speakers did mention no-knock warrants and called upon Kentucky Attorney General Daniel Cameron to charge the officers involved in Taylor’s shooting.

Until Freedom did not respond to LEO for comment in time to be included in this article.

Its rally featured local speakers, including Herron and state Rep. Attica Scott. But the guests who made headlines were celebrities: Common, Jada Pinkett Smith and Love & Hip Hop’s Yandy Smith-Harris.

“While I love folks standing up and people being vocal and being able to hit the points and stuff, a lot of local organizers feel extremely left out of the performativeness,” said Helm.

After that rally, though, Until Freedom reached out to several local organizations for its protest at Cameron’s house, said Parrish-Wright. Those groups were: No Justice No Peace, the Louisville Urban League, Grace Community Church, Bates Memorial Baptist Church, The Bail Project Louisville, the Kentucky Alliance Against Racist and Political Repression,  50/50 Mentoring Collaborative, 100 Black Men of Louisville, The Divine Nine, Cities United, LSURJ, the Fairness Campaign and the River City Drum Corps.

“I think the biggest thing we can tell anyone whose wanting to come in and help, just come in and reach out,” said Parrish-Wright. “Louisville is small enough that you can get so many people at the table. Do the best you can to get as many people at the table as possible. Then, if you don’t get it right the first time, then try again, just like Until Freedom did, and get more voices here.”

One group that Herron thinks has done right by Taylor is the national media. She said she hasn’t come across any coverage that she thought “got it wrong.” She can’t say the same for local media, however. Herron cited the WAVE 3 report that unduly focused on the background of Taylor, a victim. The segment was factually correct, but many criticized it as irrelevant and damaging to public opinion about Taylor’s innocence.

Yoruba Richen is the director of The New York Times documentary about Taylor, which will air sometime in the fall.

“Our goal is twofold,” Richen said. “Investigate why this happened. You know, if we can get closer to the truth of what happened and tell that story, that would be our goal. And then also to give a sense of who this young woman was.”

To get things right as an out-of-town journalist, Richen researched Taylor’s case by reading local news reports and browsing social media before arriving in Louisville in late June. Since getting here, she’s talked with Taylor’s family and friends and she hopes to speak with LMPD, as well, to get the “full picture.”

Herron said that it’s important to seal in an accurate narrative of the current movement. That includes what happened to Taylor and who has worked to find justice for her family and how it was accomplished.

“I say that because, in 10 years or 20 years or 50 years from now, someone is going to want to know, ‘how did that happen?’ ‘How did we do that?’ Herron said. “And so I think that when you look at it in a sense of historical context and what that means for the future, I do think that we do need to get some of those facts correct so folks know who to be reading about to learn. We can learn from our history.