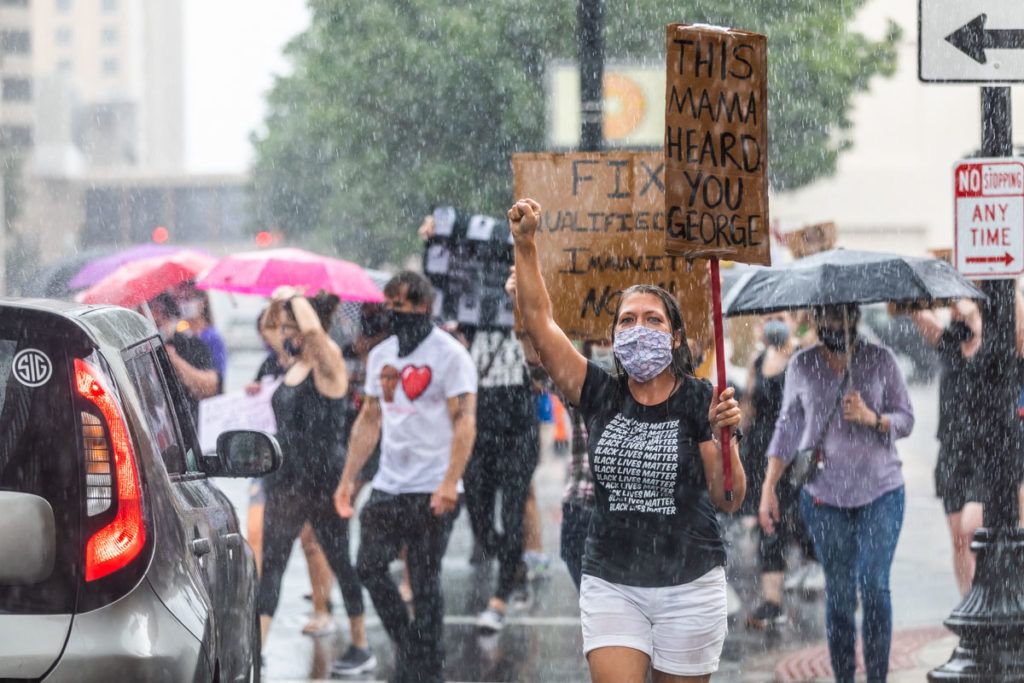 Many moms held signs referencing George Floyd, who had called out for his mom shortly before his death at the hands of former Minneapolis Police officer Derek Chauvin.

Rain wasn’t about to stop these moms from marching to demand justice for the Black lives that have been lost to police brutality and excessive force.

On Thursday, roughly 100 moms, children and other supporters in the Mama’s March began at Brook Street and Muhammad Ali Boulevard and made their way to Jefferson Square Park ahead of a weekend packed with protests.

The Mama’s March was inspired by similar marches in Chicago and Portland, where moms have joined and stood between protesters and police. Many of the moms in the Louisville march carried signs referencing George Floyd who called out for his mother as former Minneapolis police Officer Derek Chauvin knelt on his neck, killing him.

The organizer of the Mamas’ March, as well as of the recent Kids’ March, said they posted the idea for the march on Facebook and immediately received a large positive response.

“It’s exciting to give space for people who maybe haven’t come down here before,” they said, asking to remain anonymous to avoid being doxed. “Like with the Kids’ March, there was an untapped group of people who haven’t been down here who feel like they don’t know how they can get involved.”

For those who wish to get involved in the movement, the organizer said that just showing up is a great way to start. “We want to continue to encourage everyone to come down here as often as they can and be here with us, stand with us, eat with us, march with us, just spend time with us. I think that’s the beautiful thing about movements like this, specifically movements that are justice focused, is that there is space for everyone. Everyone to some degree has seen something that has always felt not ok or wrong and can kind of tap into that and realize that everyone is needed here.”