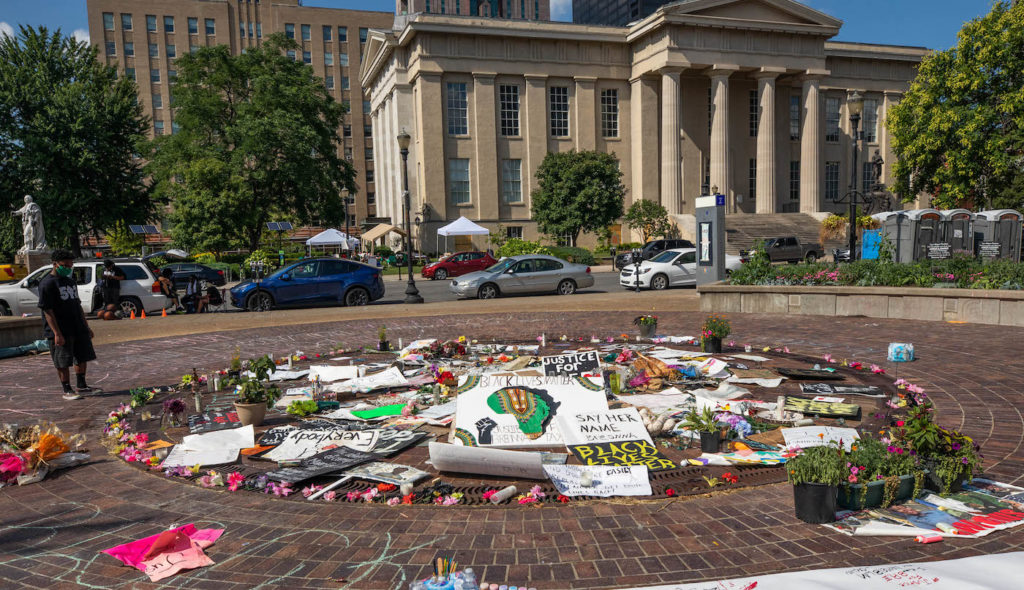 A memorial to Breonna Taylor. | Photo by Kathryn Harrington.

Jefferson Square, nestled between the monuments of civic power in downtown Louisville — City Hall, Metro Hall, the Hall of Justice and others — is a different place now than it was several weeks ago. Its history has a new chapter and, because of frequent video and photographic coverage this month, the community’s perception of this space has fundamentally changed.

The role of Jefferson Square in the Black Lives Matter and related protests of recent weeks has shown irrefutably that the people of Louisville know that a fundamental purpose for an open public space adjacent to the seats of power is public action. It’s the place to go in order to be seen and heard by those who run things. While the park has been the site of public action many times in the past, the scale of the protests, their continuous and charged nature and LMPD’s inconsistent and often violent reactions to them have given a new context for how this particular public space will be thought about from this point forward. It’s not just a place to sit and have a quiet lunch anymore.

Jefferson Square is not, by any means, the only place in our community for public action. Neighborhood centers, crossroads and other parks have often been used for protests because of their visibility and convenience, and these places have seen activity this month as well. Using Jefferson Square as a sort of epicenter, some Black Lives Matter activities over the last few weeks have snaked into the surrounding neighborhoods for greater impact and exposure. Whatever satellite activities occur, though, each day as the protests continue, Jefferson Square and the streets around it are the hub. The park’s location makes it important — a critical space of action, a modern-day agora and clearly the right urban place to be when insisting on justice.

As the protests have endured, an ad hoc memorial has been crafted on the square, an aggregation of pictures, flowers, protest signs, personal notes and other artifacts of recognition. Dubbed Breonna Taylor Fountain Circle, the memorial has been protected by protesters as much as possible, despite nightly efforts by police to clear the site. Seeded by funds from supporters from Louisville and beyond, plans are brewing to place a permanent memorial in the space — commemoration of Ms. Taylor, David McAtee and other victims of police violence in Louisville and the resolve of those who showed up to demand change.

As the energy behind and impact of in-person protests begins to wane but the community’s demand for change pushes forward through legal, policy, budget, electoral and other more abstract means, what happens next in this space? (Or, potentially, can in-person action be sustained in the long term, parallel with these other necessary pursuits?)

The possible introduction of a new memorial raises questions about plans that were already developed. Over the past couple of years a redesign had been proposed but not yet funded. The goal was to reinvigorate the park, removing the current paving, fountain and planters. An assessment presented to Metro described that the existing configuration “fails to capitalize on its potential” with “indirect and ambiguous” circulation, an arrangement of elements that “inhibits the views that are unique to this site” and limited space for programming of events.

The design presentation, prepared by the landscape architecture firm MKSK in partnership with the architecture firm de Leon & Primmer, illustrates a beautifully configured space, more generous and useful for large group activities: offering the shade of sinuous and reflective canopies, re-envisioning the fountain as a more subtle water feature, introducing a memorial wall and generally making the park more flexible as a gathering, recreation and relaxation space.

It’s a lovely vision but also one that has now been given a new context, a new set of conditions to address. In light of a potential Taylor memorial in the same space as the Law Enforcement Officers Memorial (1992) and the Louisville Firefighters Memorial (1996), are these planned updates still appropriate and sufficient? How does a design conceived before upheaval adapt to recognize a part of the park’s history that is still so present and raw?

Who should say? How should Metro move forward in a way that repairs and beautifies this critical public space without smoothing over what happened here and what the space means to the people of Louisville now? Or, in light of the continued injustices the protests spotlighted, should money be spent here at all? To what end?

Is it time now to create a physical acknowledgement of healing to come, or is it too soon and any changes to this space should be delayed until meaningful change in law enforcement practices can be witnessed by the community? Could something be done to mark progress, or lack of progress?

Is there a way to introduce something in Jefferson Square, at Breonna Taylor Fountain Circle, that can be visible from the windows of the surrounding structures and the streets, to signal that justice in our city is a process and a shared responsibility, not something to either be forgotten or aesthetically memorialized but actively tracked?

Whatever happens, it will necessarily be a very public process and one that the existing design team is well-equipped to address. The people have shown that this space plays a unique role in the life of our city, and they’ll want to make sure that any renovation reflects this significance.

The proposed re-design of Jefferson Square is available for review at: louisvilleky.gov/government/advanced-planning-and-sustainability/jefferson-square-redesign

Steven Ward, AIA, is an architect in Louisville.