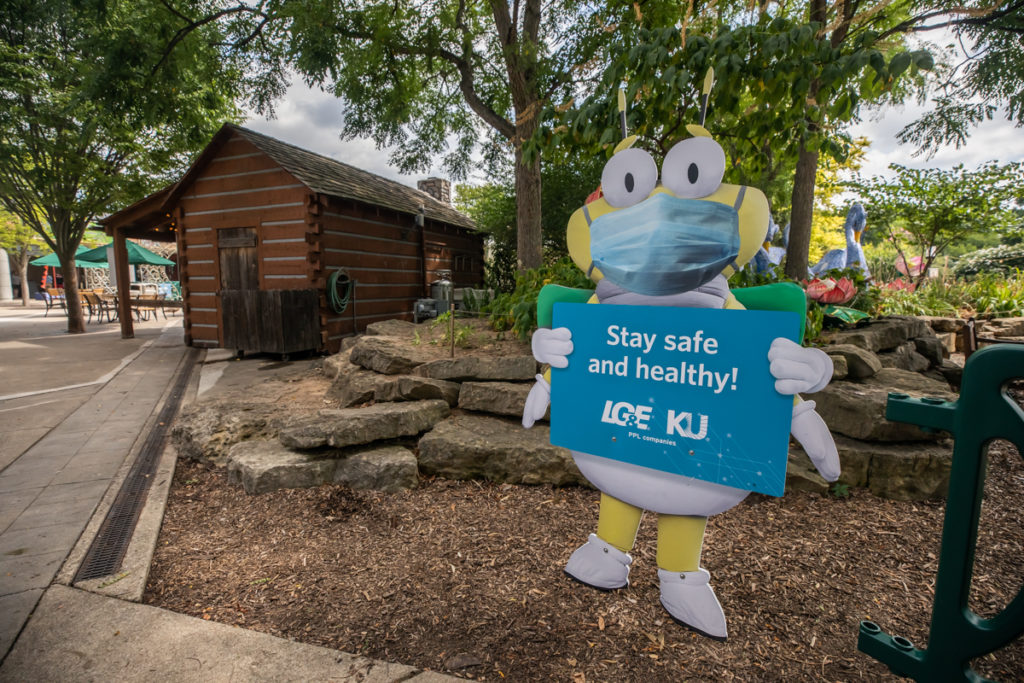 The Louisville Zoo has new safety measures for guests, including temperature checks, online ticketing and instructions for social distancing. | Photos by Kathryn Harrington.

This year was going to be different.

The Louisville Zoo ran a deficit in 2018 and 2019. Record-breaking rainfall kept guests from visiting the zoo, said Director John Walczak. And, in 2019, a mine collapse on zoo property shut down its revenue-generating train attraction, which remains closed.

That year, the city started talks of finding a private operations manager to help run the zoo instead of just Metro government. Mayor Greg Fischer, encouraged by rising pension costs for the city, according to Walczak, wanted to keep Metro’s yearly contribution to the zoo at $5.3 million.

But, three months into 2020, the zoo was looking at a $1 million surplus instead of a deficit, said Walczak. A new sloth experience exhibit was about to open up with 3,000 people already interested in going, and crowds were flowing in to see the Wild Lights Asian Lantern Festival, which lit up the zoo with over 2,000 handmade, silk lanterns.

Then, the pandemic hit. On March 17, the zoo closed, and Walczak had to send home 60 to 70 of his seasonal employees.

“On the business side of things, like for everyone, and we’ve been no exception, it’s been pretty devastating,” he said. “We were heading for our best year ever.”

The downturn was swift and dramatic. Walczak estimates that the zoo finished the fiscal year in June with a more than $2 million deficit — the exact numbers are still being finalized.

“Now, what are we doing about it?” he asked, rhetorically. The plan, he said, is to try and save on expenses while still holding onto the zoo’s workforce — all while slowly and safely reopening, which doesn’t exactly help with bringing in revenue.

Councilman Bill Hollander, who chairs the budget committee, said some Metro departments and agencies run deficits, and some run surpluses. This year, when the budget is balanced, it is projected that the city will have to dip into its rainy day fund to cover its expenses because of COVID, he said. The zoo will likely be a contributor to that deficit, he confirmed.

The zoo, meanwhile, has already started to reopen. It submitted a plan to the city’s Incident Management Team with all of its health and safety procedures, which was approved after an inspection from the Public Health & Wellness department in June.

The zoo opened to members on June 12 at 11% capacity, below what many zoos across the country were doing, said Walczak. “We wanted to make sure, again, that everything was extremely safe,” he said.

The zoo has slowly ratcheted up its capacity, and now allows 3,500 people, or around 43% of what’s possible, to enter the zoo. Often, because of the heat, only 1,500 people show up. Unfortunately, the zoo missed out on its spring season, which is usually its busiest alongside fall.

To keep up this system, visitors must buy their tickets to the zoo online.

Once they’ve arrived, the safety measures continue with temperature checks and instructions for guests to stay with their group and 6 feet apart from all other visitors. Masks are recommended but aren’t required since the zoo is an outdoor attraction, said Walczak. All of the zoo’s indoor exhibits remain closed, as well as its playgrounds and attractions, like its carousel. Staff members are required to wear masks, however, and eight zoo employees are dedicated to sanitizing high-touch surfaces. The zoo’s seasonal employees are now back.

At the beginning of July, the zoo announced that it was seeking proposals for the new operations manager that had been discussed in 2019. Walczak says that the RFP was a result of separate financial issues that were already lurking before the zoo’s COVID woes.

Metro Council went from appropriating $3.1 million to the zoo in fiscal year 2014 to over $5 million in fiscal year 2019 where it has stayed. Hollander said he values the zoo, but he wants to keep the city’s contribution where it is.

In the past, Walczak has said that 70% of all Association of Zoos & Aquarium zoos are public-private partnerships. His goal is to make sure that the zoo stays accessible to everyone living in the community, no matter who is running it.

“Really, what the zoo is about is our heart and soul,” he said. “And our heart is giving people a place where they can get away from the hard realities of everyday life and the stresses of everyday life, and god knows there’s plenty of those right now.”

Walczak has been walking the grounds every day since the zoo reopened, he said. He talks to all of the guests he sees, and most of them have thanked him.

“We needed to get out and enjoy the animals,” they say.