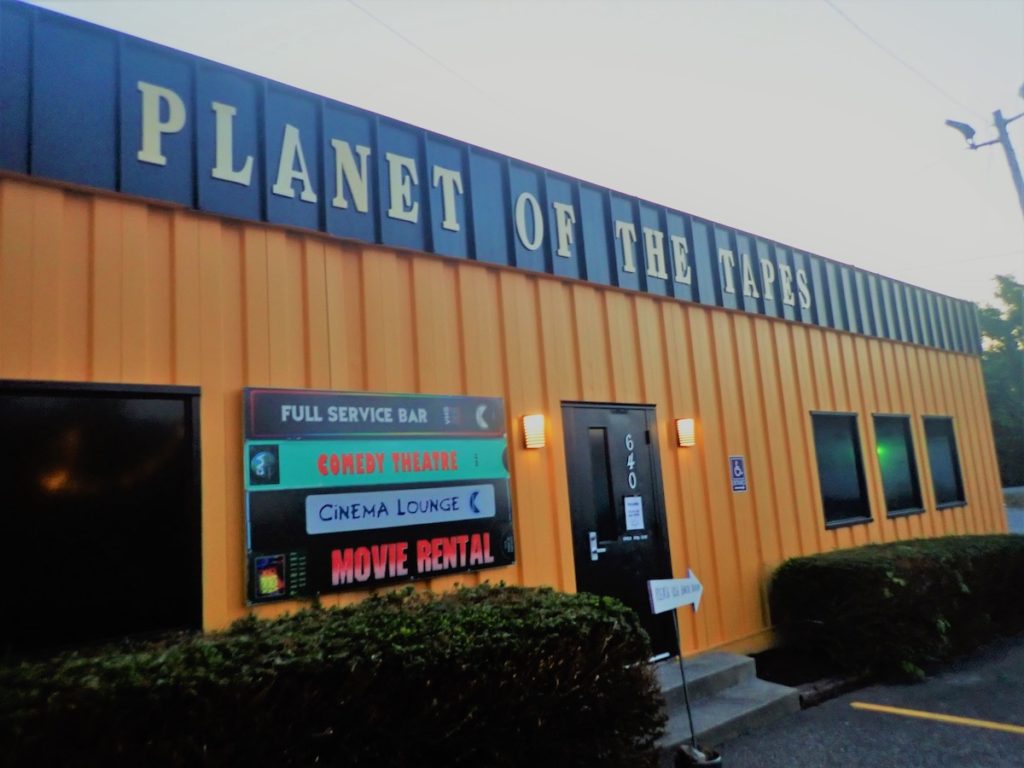 The entry to Planet of the Tapes. | Photo by Julie Gross.

A comedian and a contractor open a bar during a pandemic. This isn’t a joke and there is no punch line, but the story gets better. The new entertainment venue, Planet of the Tapes, which opened in early July, includes a comedy theatre/cinema lounge, a movie rental room and a full bar connecting the two. The owners, Chris Vititoe and Jim Bob Brown have been planning this for over a year, and when the pandemic shutdown happened, they both continued with building renovations because what else could they do? Vititoe pointed out that Brown is the skilled contractor who brought the physical parts to life. “All I did was hand him screws and hold things for him,” said Vititoe. “He absolutely built this place.”

Vititoe started in comedy 10 years ago and has been steadily performing in a creative capacity since 2015. Besides traditional stand-up, he has donned a make-shift “Robocop” costume, performing music under the moniker Tony Robot. He also currently co-hosts the show Big Howell and Possum as the human-size marsupial sidekick Possum with fellow comedian Howell Dawdy. The show is on the radio station WFPK on Mondays, and they also do a video livestream on Twitch on Wednesdays. Brown built the Possum costume, Vititoe added.

Located in the enormous parking lot alongside Mile Wide Beer Co. brewery, Planet of the Tapes’ modest, metal building stands out due its bright yellow-orange paint. A door sign with a cartoon character rendition of Predator advises that masks are required for entry. This is only the first of many COVID-related protocols that Planet of the Tapes requires of its customers. A host meets you at the door, offering hand sanitizer and instructions on how to order drinks and the house rules. House rule No. 1: If you get up, mask up. The host seats you at a table, spaced within the state’s guidelines of other tables, and that is the only time you can take the mask off. Anytime else — such as going to the bathroom, perusing the movie rentals or looking at the film-related art — the mask must be on. Vititoe said, “The host is crucial to relating the rules. Welcome to being in a bar during COVID.”

Like many businesses that are open, Planet of the Tapes had to devise a new approach to serving customers. Ironically, its “silent menu ordering” system, which was initially devised to not disrupt a live comedy show, falls nicely within COVID contactless protocols. Each table has paper slips to mark your order and a holder to place it in, which your table server retrieves and then delivers. Vititoe called it the “ninja style” of getting drinks.

A giant projector movie screen is framed by red drapes and, during this visit, was showing the 1987 film “Garbage Pail Kids” with no sound but subtitled. And an eclectic playlist of music sounds could be heard shifting from Tear for Fears, Louisville musicians Tyler Lance Walker Gill and Prayer Line to Fats Domino. The walls are trimmed in rows of VHS tapes, which backs up the tapes part of this planet. The movie rentals, however, are DVDs. “I do want to play more VHS movies on the big screen,” Vititoe said. “I like the look of the film [on VHS], and sometimes the trailers on a VHS are different than what they would release on a DVD and you can find some gems there. But I’m not a VHS snob.”

Planet of the Tapes has around 1,700 movies available.

“You’ve got your [online movie] streaming services, which I love, but I like browsing the physical collection,” he said. “Going somewhere, looking at it, flipping it over and the experience of shopping for stuff. Someone came in the other night and asked me if I had ‘Lost Highway.’ He said they were having trouble finding it anywhere, so I just went ahead and ordered it, so I have it now. I will totally take requests if I think it is something other people will like.” The movie genres range from documentary to Western to weird and rent for $2 a day with no reminder call if you forget to return it. After two weeks, you’ll be charged the cost of the movie.

Starting in late July, comedy shows will be ticketed and purchased online in advance due to reduced safety capacity. The room has a capacity of 80 but is currently operating at 40%. They will only be selling around 30 tickets per show during the pandemic.

“I will have to undersell just so I make sure everyone will be adequately spaced,” Vititoe said. “You’ve got to. If we’re going to do this, we’re going to do it right. I’m very analytical, I don’t take anything as it comes, I’m Larry David in that sense. Our silent table service is very Larry David,” he said, laughing.

“We will certainly be the saving grace for a certain type of person who loves to nerd out over movies and comedy and browse a physical collection of DVDs to rent,” Vititoe continued. “I really wanted to make a comedy club that you could just hang out at any other time, but there’s also good stuff that’s booked there.”

A wall that has their painted motto of “Be Kind, Unwind” speaks volumes to how much we need Planet of the Tapes.