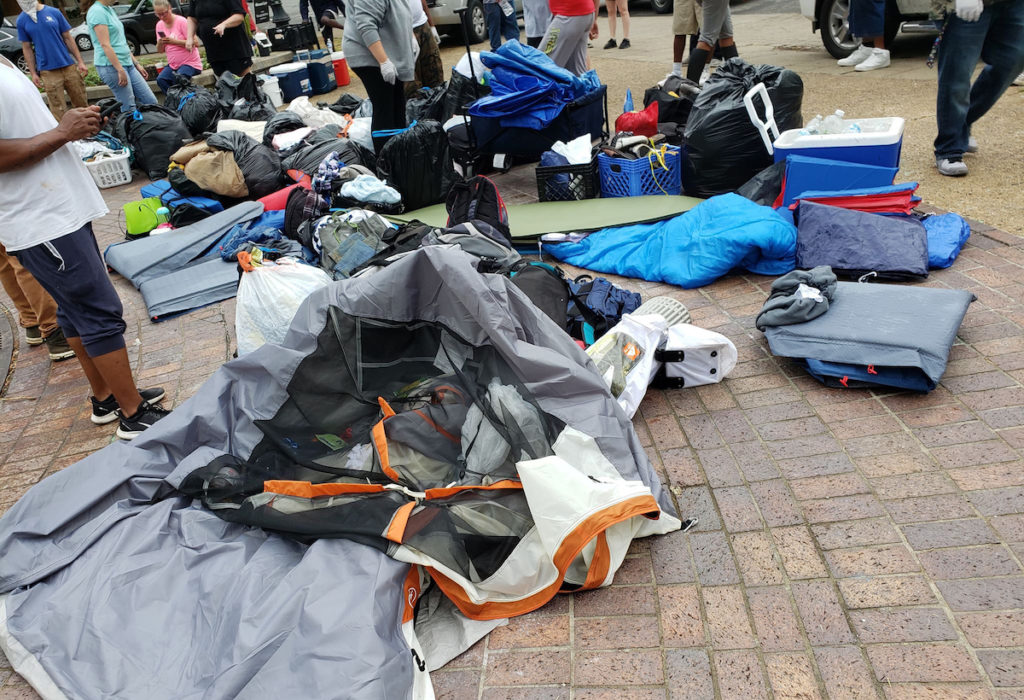 Items salvaged from the city dump where they had been taken. | | Photo by Virginia Lee.

The outpouring from the community has been enormous: A call would go out for supplies to help protesters occupying Jefferson Square Park, and people delivered pounds and pounds of  ice, water, charcoal, food, medical supplies and whatever else was needed.

On Saturday night, a man allegedly shot to death 27-year-old Tyler Gerth, a photographer. The police then moved in to clear the park. They would not let people back in to get their belongings. Instead, LMPD spokesman Lamont Washington said Metro Public Works officials would “pack up the tents in the park and ensure all the belongings are secured so they can be returned to their owners” at 600 Meriwether Ave., The Courier Journal reported.

As you can see from these photos, the property had been jammed into garbage trucks, compacted and left in dumpsters at the city’s solid waste center.

Mandy Bell, one of the protesters, told LEO that she had left the park for a short time and returned to find “only Breonna’s memorial was standing, all else gone — the tents we lived in, the medic tent and supplies, the food canopies, food, generators, coolers, waters, protest signs. The police statement said our things would be secured and could be collected at 600 Meriwether so I headed there and was first on the scene. All of our belongings had been tossed into dumpsters — not all — we later realized our generators, large coolers, sound system and several tents, among other things, were missing. We quickly solicited help and salvaged what we could from the dumpsters … All of the tents and canopies were broken. Another dumpster was later found across the street, with those belongings having been run through a trash compactor. Many folks were unable to find their phones, keys, or necessary medications. A houseless woman’s wheelchair was smashed. This is another example of police brutality to add to the pile.”

Characteristically unaware until it is too late, Mayor Greg Fischer offered an apology on Facebook:

“The treatment of their personal property was not acceptable and not our intent. I apologize for the miscommunication between our Public Works crews. We have made a mistake and we have a process in place for reimbursement.”

Some protesters say they do not want to file a claim because they feel it is a trick to get their names and information.

Bell said she will file one on behalf of her boyfriend’s property loss because the city already has her information from an arrest during the protests.

“I salvaged all of my stuff from my tent, miraculously, even though it was at the bottom of the dumpster,” she said.

The day after the park was cleared, the community again donated, filling tables with what the protesters needed to keep up their fight for racial equality and justice.