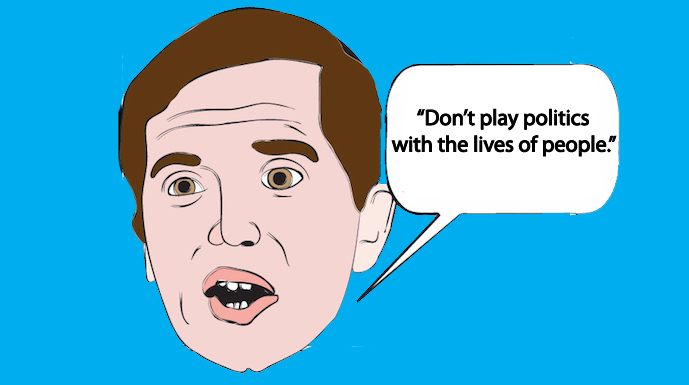 “The coronavirus is not involved in American politics.”

So says Mitch McConnell, who has gotten most things right about the pandemic but not that one. What he means is that the virus doesn’t pick and choose whom it infects. But it has also infected politics, and that’s making worse the disease it causes — and hampering our ability to control it.

President Trump is the leading example, mismanaging the pandemic, downplaying it and politicizing the best way to fight it: wearing a mask. But McConnell is the leading Republican exponent of masks — and of Dr. Anthony Fauci, in whom he has “total” confidence, he said to a question from me recently.

This topic is perhaps the Senate majority leader’s greatest separation from Trump, to whom he has hitched himself to ensure re-election. It’s not a difference likely to draw the president’s ire, but could help McConnell hang on to voters who’ve backed him in the past but are feeling queasy about Trump.

The state Supreme Court blocked all such lower-court orders until it could consider all the cases in full, and Cameron should be glad; his timing was spectacularly bad. Coronavirus cases are surging in the state, helping Beshear argue that an adverse ruling would “destroy our economy, cost lives and keep people from being back in schools.”

Implicitly addressing Cameron, he said, “Don’t play politics with the lives of people.” That line included another implication, that Cameron is pandering to the know-nothing elements of his party who disregard science and public health experts.

It’s not a good look.

Cameron says he’s just defending the state constitution, and some of his arguments are worth hearing. He tweeted earlier, “This is not about the governor’s policies. … Governors are collaborating with elected leaders from both parties to make sure that COVID-19 restrictions balance public health with the law. This governor should do the same.”

Therein lies a clue to why Cameron has gone from selective picking at politically fraught parts of Beshear’s actions (churches being the main example) to a frontal assault on them, which could make him look not just overly political but irresponsible.

He and other Republicans don’t like Beshear’s attitude or mode of operation, and the conflict has been escalating for months.

When Beshear issued his order to wear masks, Cameron and Republican legislative leaders wrote him a tart letter saying, “As usual, you have put forth this order by edict rather than through collaboration.”

Asked about that the next day, Beshear was overly dismissive, talking about other lawmakers’ failure to wear masks and citing the infection of 26 Mississippi legislators: “This is what happens when you don’t take it seriously.”

At his next briefing, Beshear said the collaboration with legislators “is just not in the law” and “I’ve got a limited amount of time.” That was more responsive but still too dismissive.

The next day, Republican legislators on a contract-review committee raised the ante by asking Cameron (and the U.S. attorney, who has better things to do) to investigate the emergency contract issued to get the Jefferson Davis statue out of the Capitol. They cited a paltry campaign contribution of $750 from the contractor’s wife.

Beshear, who had earlier said he didn’t know who got the contract until workers arrived, responded in kind. He noted that the committee chair, Sen. Steve Meredith, R-Leitchfield, is the father of Chad Meredith, Cameron’s solicitor general: “That would have been like Steve Beshear asking me [as attorney general] to investigate [Gov.] Matt Bevin after Matt Bevin said something about him.”

It’s time for both sides to turn down the burner and for Beshear to start talking with legislative leaders. His father did as governor, and they appreciated it. He could buy himself some goodwill, which he could use with Republican supermajorities in both chambers; they’re the face of Frankfort to many voters. And we could use more transparency about how he makes pandemic decisions.

Beshear cited a Democratic Party poll to show that likely voters in the November election support his handling of the crisis, and he has earned their approval. But his popularity could easily wane as more conflicts arise, people get weary of “the new normal” and — God forbid — the pandemic gets worse.

Beshear says he’s “through with politics.” I take him to mean that he still might seek re-election in 2023 but is making decisions without regard to politics. His pointed repartee makes that more believable; it hasn’t been politically advantageous, or helpful. He needs to remember that politics is also dealing with people.

Senate President Robert Stivers summed it up neatly on Kentucky Sports Radio: “We have yet to have any real substantial conversations about what he continually calls Team Kentucky . . . I guess we’re not invited to be on the team.” They should be.