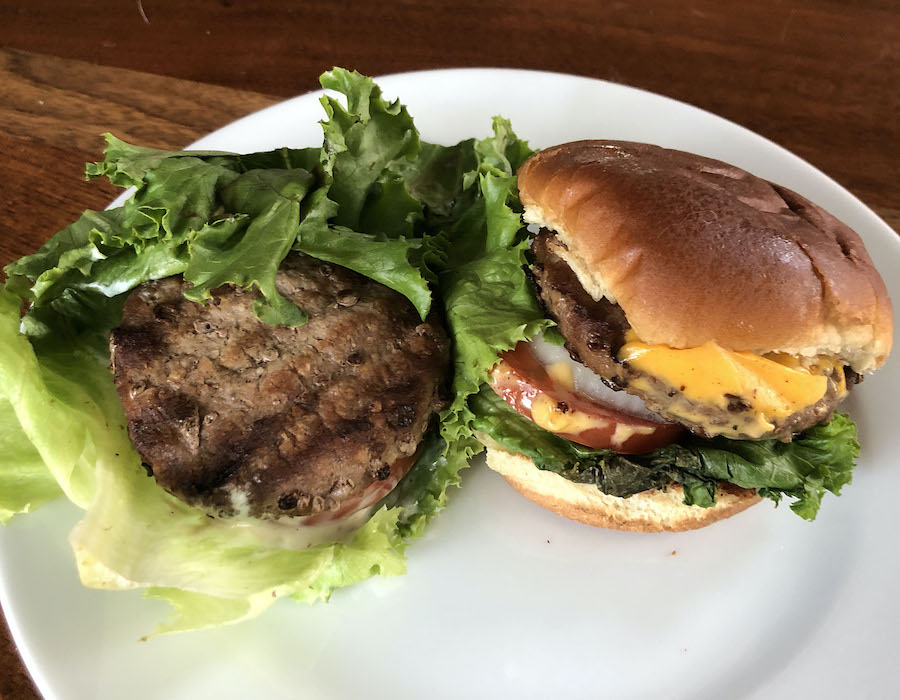 BurgerIM’s lamb burger in a lettuce wrap and an Angus beef burger offered a mix-and-match experience.

If you’ve been wondering about the odd name of that new gourmet-style hamburger joint in the Vogue Center, wonder no longer: The Hebrew plural ending “-im” on the English word “Burger,” yields “BurgerIM,” a crafty way to make a common word a trademark.

We brought home a bunch of burgerim, er, burgers, the other day and found them estimable, particularly considering the double whammy that the franchise owners have had to face during their first months in business.

First, while the husband-and-wife team of Veronica Michel and Nirmal Raj were busy converting the former The Artist in You shop to fit the restaurant, the 4-year-old parent corporation, California-based Burgerim Group USA, collapsed.

“Burgerim was once one of the hottest, fastest-growing brands in the U.S.,” the industry journal Restaurant Business reported Jan. 20. “Then its founder left the country, leaving behind a wreckage of unpaid workers, bankrupt franchisees and others struggling to make it work.”

Still, like other individual franchisees around the country, Raj and Michel persevered. They got everything done and scheduled their grand opening for March, just days before the pandemic locked down the state’s restaurants.

“Yes, we did open BurgerIM in Louisville the week before the pandemic hit,” Veronica Michel told the HotBytes Forum. “The corporate had their own mishaps. While they are fixing their act, we are doing everything we can to make it right within Louisville. We have received overwhelming support from the community and are very grateful for that.” Add my voice to that chorus of support.

BurgerIM’s menu is simple and, as you might expect, made up almost entirely of burgers and toppings, with only a handful of non-burger items at the end of the list for those who insist.

The menu layout took me a little time to figure out, but work on it, and you’ll get there. At the top are eight Big Burgers (all $6.99 or $7.99) with extensive toppings. The Dry-Aged Beef, for example, lavishes an onion ring, bacon and cheddar cheese and a dollop of barbecue sauce on its 1/3-pound patty and soft, dark-golden-brown burger bun. The Spanish Beef burger loads spicy, habanero aioli, grilled jalapeño, pepper jack cheese and leaf lettuce on its 1/3-pound burger.

If you’d rather fashion your own burger combo, choose the Duo ($6.99) or Trio ($9.99) option to order two or three slider-size BurgerIM, then take your pick of 1/3-ounce proteins (yes, it does say that), bun and toppings.

Non-burger items include chicken wings or strips (both $6.99), a vegan Indian samosa ($3.99) and a couple of salads ($3.99). The beverage list includes soft drinks, milkshakes, commercial and craft beers and White Claw.

We filled up on four burgers — two meat options and two veggie selections — and a couple of sides.

A samosa ($3.99) made a fine starter. A seriously spicy ball of mashed potatoes, onions and peas was rolled into a triangular pastry turnover and deep-fried golden. It was flaky, delicious and so filling that I saved half for another day.

The meat burgers — an Angus beef burger on a regular bun and a lamb burger in a lettuce wrap — were lean and gently chewy. The beef remained barely pink at the center after the 10-minute drive home; the lamb had no pink remaining. The lamb came with a tasty tzatziki sauce with a touch of mint and standard toppings of lettuce, pale tomato and a thin slice of onion. The Angus burger was painted with pale, creamy sauce and topped with melted yellow American cheese and the regular toppings.

The meatless burgers — a falafel and an Impossible Burger — demonstrated different approaches to the art of building a vegetarian burger. Falafel is a ubiquitous street food dish in Israel and the Near East. These crisp, deep-fried balls of chickpea flour, cumin and other aromatic spices are often stuffed into pita bread with tahini as a walking-around snack, and it’s delicious that way. But it’s just as good as a burger! Crisp and chewy, BurgerIM’s falafel burger is mild on aromatics, but tahini and lettuce, pickle and tomato on a good bun made up for that.

The Impossible Burger leads the growing niche of modern, high-tech alternatives to meat that seek to replicate the flavor and texture of ground beef in an animal-free product. BurgerIM’s half-moon-shaped version is flattened like a smashed burger and grilled deliciously dark and crisp-edged. With standard burger toppings and melted yellow cheese, the flavor is dead on. We had to look carefully to be sure which burger was the Angus and which was the Impossible.

On the side, BurgerIM fries are thick, whole rounds cut across the potato, deep-fried pale golden and dressed with garlicky aioli. Fat onion rings are thickly coated with crunchy, panko breading and fried dark-golden brown.