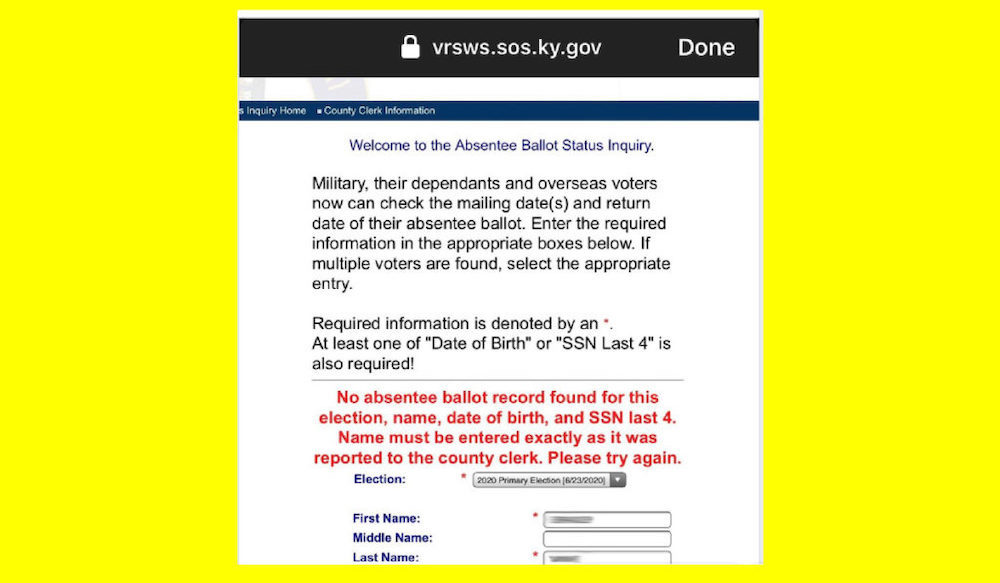 The Kentucky Secretary of State’s office has fielded hundreds of calls from voters who have had problems checking the status of their absentee ballot online, stoking fears of voter suppression, although the available data refutes that.

The coronavirus pandemic prompted Secretary of State Michael Adams to open absentee voting to everyone in the state during the primary — raising the gates for almost 750,000 absentee ballots to flow into county clerk’s offices (roughly 73% of all votes cast). The process went smoothly for the most part, but the sudden shift to mostly-absentee voting left some Kentuckians worried that their ballot would not be counted.

In an attempt to help, the Kentucky State Board of Elections created an online portal to make it easier for voters to check whether their absentee ballot had been received and counted. But the website has not worked for some people, prompting them to question whether the election was run fairly. This was heightened by a close election deciding the Democratic nominee to face U.S. Sen. Mitch McConnell.

“I’m not aware of anyone being permanently harmed or disenfranchised by any of the actions of the county clerks,” Adams told LEO. “I think it was a very smooth system.”

Yet, some voters who entered their information on the Board of Elections’ Absentee Ballot Status Inquiry Page have been told that their ballot request was not received. Adams explained that the name entered has to match the name on the Kentuckian’s voter ID card. Some voters who submitted their inquiry with their middle name weren’t able to access their information. The web page has been changed so you no longer need to enter a middle name.

Adams’ office also found that some voters’ problems were solved if they used Google Chrome or a laptop or a desktop instead of their phone.

Some Kentucky voters also tried unsuccessfully to use a web portal that said it was for “military, their dependents and overseas voters” who wanted to check their absentee ballot status, according to screenshots provided to LEO. It’s not clear if it was the same web portal created by the Board of Elections, but the page doesn’t appear to exist on the internet anymore.

Adams said he did not know of this issue and referred the question to the Board of Elections, which referred questions to Adams.

Here is my experience: The web form originally told me that my ballot request did not exist, but after leaving out my middle name, it said that my ballot had been received.

If that doesn’t work for you, Adams says to call your local county clerk’s office. Whether or not someone voted is public record in Kentucky (just not for whom).

In Jefferson County, voters may call the Election Center at 574-6100. I called on July 2 and received an answer in less than two minutes. All I had to do was give my first and last name, and I was told that my vote had been counted.

But, for other voters, there is still the possibility that their ballot was lost in the mail (Adams said there is “some risk” of that) or that it was rejected for not meeting state requirements. Ballots can be thrown out, for instance, if it was not signed correctly or if the signature doesn’t match the voter’s driver’s license or voter ID card; if the inner or outer envelopes are missing or damaged; or if the person voted twice.

Adams said he does not know how many absentee ballots were rejected in the recent primary. That is not something that county clerks are required to provide to his office, he said, but it is something that he plans to ask for.

Using rough numbers from Adams, around 1,020,000 voters, or 29% of those registered, cast some sort of ballot in the primary. This was the highest primary voter turnout since 2008.

One person was caught trying to vote twice in this primary, said Adams, and around 800 voters were sent notification letters that their signatures did not match. “Several hundred” of those were eventually counted. He also issued an executive order to allow Kentuckians to vote in person on election day if they never received their absentee ballot.

State Rep. Charles Booker, who lost to Amy McGrath in the Democratic Senate primary to challenge McConnell, has said in a statement that he does not plan to contest the results of the primary but that “too many Kentuckians” have not been able to check their absentee ballot status online and thousands more had their ballots rejected.

Booker was the progressives’ favorite to win the Democratic nomination. Despite tens of millions pumped nationally into the moderate McGrath’s campaign, Booker lost by less than 3 percentage points and only 15,149 votes.

“I accept the results of this election, and concede this race,” he said. “But we will push in the coming days to ensure transparency and accountability in our state’s electoral system, because it is essential that every single Kentuckian has faith in our democracy as we go forward.”

Chelsie, a doctoral candidate in Louisiana who still votes in her home state of Kentucky, said in an interview with LEO on July 3 that the Board of Elections’ portal said that her ballot was sent to her but never received by the clerk’s office, even though she mailed it out the day before the primary. (Chelsie, who is 26, did not want to give her last name, because she said she has received death threats for activist work she does in Louisiana.) That alone rattled her confidence in this year’s primary, in addition to hearing from friends who had the same experience with the online portal.

“I do not want to automatically, necessarily, jump to voter suppression, but that is low key how I’m feeling,” she said. “…There has just been too much, in my opinion, that has went wrong, to think that it’s maybe not intentional. Because I don’t believe in coincidences over and over again.”

Chelsie said that, as a Black woman whose ancestors died for the right to vote, having her ballot counted is important. She was particularly excited this year to vote for Booker, who was in a program with her in college.

“I’ve always been, very much, ‘you should be voting.’” she said. “But I think that right now, in this climate especially, it was really important that we were upholding the people that uphold our principles in the state.”

Chelsie said she called the Jefferson County Clerk’s Office to check on her absentee ballot status, but no one picked up. As of July 6, she had not called the Elections Center or checked the portal since it had been changed to include no middle name option. But, she said, when she did use the portal previously, she tried it with and without her middle name.

Despite her experience, Chelsie said she supports the use of absentee voting.

“I know that there is a narrative particularly with conservatives that absentee ballots can be fraudulent and blah blah blah,” she said. “But I feel like the margin for that is so narrow and it’s like .00-something percent, that I would much rather allow some random extra person to vote then suppress an entire group of people to be able to vote.”

It remains unclear whether absentee ballot voting will remain expanded, even for the general election in November.

“My first thought would be that if it’s not going to be feasible to have a traditional election, my first pivot would be to expand early voting,” Adams said. “I found more satisfaction with that than I did with the mail-in. It was a lot more controversial with a lot more perceived problems on the mail side, although it was successful. But I didn’t find a single person that didn’t love early voting.”