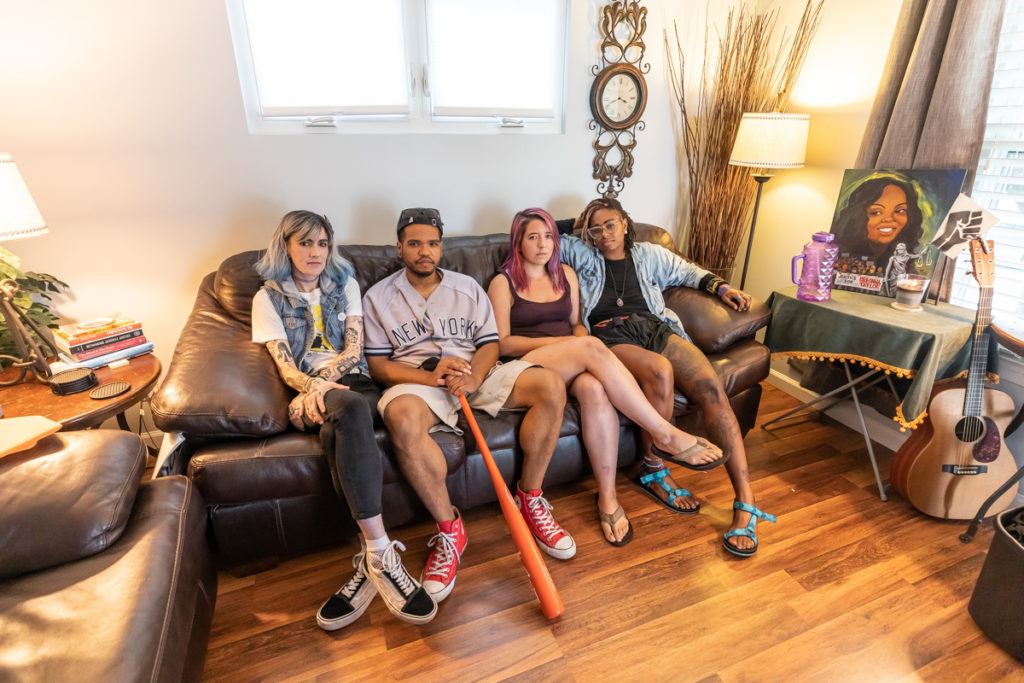 [Update: On Aug. 9 after 20 days of not eating, two of the hunger strikers, Amira Bryant and Vincent Gonzalez announced that they had stopped their fast “in celebration of Black August.” The group said on Facebook, “Tabin Ibershoff and Ari Maybe will continue in honor of their sacrifice and to allow Vince and Amira the rest of the month to heal and rest.”]

There have been marches, phone zaps, petitions with millions of signatures, an occupation of the Second Street Bridge and countless posts on social media asking, unsuccessfully, for the police officers involved in Breonna Taylor’s death to be fired.

“We just saw that nothing was happening,” said Ari Maybe, a 33-year-old nonprofit worker turned antiques and collectibles picker. “And unfortunately, if you want something to happen, sometimes you have to do dramatic shit.”

“Dramatic” — like launching a hunger strike with three other people and livestreaming it on Facebook for hours a day.

In addition to Maybe, the other strikers who are refusing all caloric intake until the Louisville police officers involved in Breonna Taylor’s shooting death are fired and have their pensions revoked are Amira Bryant, a 27-year-old residence hall director; Vincent Gonzalez, a 33-year-old social worker; and Tabin Ibershoff, a 29-year-old musician, interpreter and event planner.

The “Hunger Strikers for Breonna” protest started July 20. Now on their 10th day, the strikers have consumed nothing but black coffee, herbal tea, vitamin supplements, prescription medications, zero-calorie gum and water. Last Wednesday, Bryant and Maybe said they hadn’t started to fully experience the impact of not eating. Both have fasted in the past for health reasons. But on Sunday, the strikers posted to Facebook that they were “losing energy” and couldn’t “stand up quickly for long periods of time.”

The strikers, most of whom did not know each other beforehand, are living together in an Airbnb at an undisclosed location in Louisville.

Even though Louisville’s other protests have not yet resulted in the police officer firings, Bryant said that all of the actions have been necessary. Another form of protest, however — a hunger strike — was needed, too.

“[It] is and has for years been the most extreme and most peaceful way to protest,” said Bryant.

Extreme, she said, because it’s so risky for the strikers’ health. And peaceful because it puts only their bodies in danger. Another benefit to the hunger strike, said Maybe, is that they can’t get arrested for it.

Gonzalez originally came up with the idea for the hunger strike. He started reaching out to people and posting on social media, trying to get others to join him. Bryant, Maybe and Ibershoff responded. But, they aren’t the only ones involved with the strike. A team of 35 to 40 is helping run it, said Maybe, including medics, communications professionals and the Kentucky Alliance Against Racist and Political Repression.

The strikers’ plan is to get the attention of everyone possible with their protest, said Bryant.

“So, of course, we want the attention of those who are in the administration, Fischer, we want Attorney General Daniel [Cameron]. We want his attention,” she said. “We want LMPD’s attention. We want the citizens’, the local people’s, attention and everyone outside of us because it’s just going to lay on more and more pressure.”

So far, no one from Metro government has contacted the strikers, said Gonzalez at a press conference on Sunday.

The officers the strikers are targeting are Sgt. Jonathan Mattingly and detectives Myles Cosgrove and Brett Hankison. On March 13, they were executing a no-knock search warrant at Taylor’s apartment as part of a narcotics investigation when Mattingly was shot by Taylor’s boyfriend, Kenneth Walker. Walker has said that he thought the officers were intruders, not police. The three officers returned fire, striking Taylor, a 26-year-old ER tech with no criminal record, five times. No drugs were found at her home.

Local protesters have been demanding since May that the city fire the officers and charge them. Hankison was fired on June 23, but the other officers remain employed. Mayor Greg Fischer has said that he cannot fire the officers without following procedure outlined in state law and the collective bargaining agreement between the city and the police union. The contract says that the Louisville police chief, now Interim Chief Robert Schroeder, has the authority to fire officers. The Louisville Metro Police Department told LEO that they could not comment on the strike due to the ongoing investigation and pending litigation. And, a spokesperson for the mayor’s office said that the city believes that the Kentucky Retirement Systems’ board is the only entity with the authority to revoke officers’ pensions.

But, the strikers point out that officers involved in recent killings of unarmed Black men in Minnesota and Atlanta, including in the death of George Floyd, were fired almost immediately.

“I’m sure they had a policy and procedure,” Maybe said.

He said the strikers are trying to be realistic about what to expect from the strike. That is why they are not demanding that the officers involved be charged, too.

“I think that’s what, a lot of people are looking at us and just thinking that we’re just being idiots,” Maybe said. “But we put thought into this. There has been strategy in place. And we feel that if we just throw ourselves into this and just hope for the very best case scenario then we’re going to fail, and that will ultimately be a detriment to the movement.”

Hunger strikes have a rich, modern history as a nonviolent form of protest. In India, Mahatma Gandhi performed them to protest British rule in the 1900s. In recent years, hunger strikes have been used by renters who were forced from their New York City apartment complex because of safety issues and by workers in Hong Kong who wanted to reinstate a labor law. Most hunger strikes occur in jails or prisons where participants have no other way to protest, according to an analysis of 1,441 hunger strikes, titled “Starving for Change: The Hunger Strike and Nonviolent Action, 1906-2004.”

The report found that 75.5% of 327 strikes with clear outcomes achieved positive results, such as concessions, reforms or persons given amnesty or released from prison. Most hunger strikes, 72.5% of 631 for which researchers could determine a result, were called off by the strikers, and only 6% resulted in death.

Bryant and Maybe said that each hunger striker has their own limit that they’ve discussed with the others. Some, said Maybe, have a set number of days they are willing to go, and others are willing to push it to a “very serious level” and have discussed the possibility of “do not resuscitate” orders if they stop breathing or their heart stops beating.

If officials let the strike go that far, Maybe said, it will show what he already knows. “The system doesn’t care about the people that it is funded by and created to protect,” he said.

Their constant updates, including the muted livestream and regular video check-ins blasted on a Hunger Strikers for Breonna Facebook page are part of a strategy to grab the public’s attention and to ensure that the correct narrative about the strike is told.

“And this kind of protest, if no one sees it, it’s worthless,” said Maybe. “If a tree falls in a forest and no one hears it. If a bunch of people sit in a house and starve together and just say they’re doing it —“

“It’s tangible,” said Bryant. “It was one thing when everything was word of mouth. But now, actually seeing footage and content and other documentaries, you can’t deny it.”

Bryant and Maybe said they don’t know of any other hunger strikes around the world that have been livestreamed. The strikers also want for the public to participate in and post about the hunger strike on their own, either by giving up something themselves, such as smoking or dessert, and promoting it, or by just sharing the Facebook page.

Even if the strikers get what they want, however, it won’t be “justice for Breonna,” but a start to it, said Maybe. “It is not the end of he road,” he said. “This is really the scaffold for the next act whatever that may be whether we’re involved in it or not.”