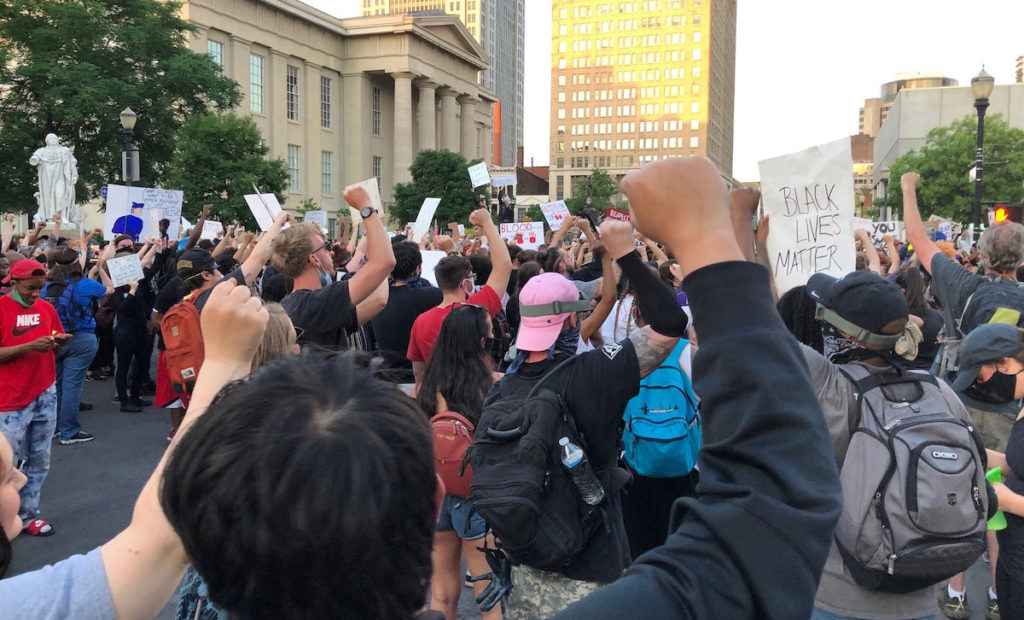 Protesters outside of Jefferson Square Park. | Photo by Scott Recker.

Tuesday’s protest didn’t end until after midnight, and there was no clash with the police, no tear gas and no arrests. It was a night of changed tactics from the authorities, as the LMPD and the National Guard remained largely invisible, generally staying several blocks from the crowd, not engaging or enforcing the curfew. The energy was remarkably different than the previous five nights. Without a show of force from the authorities as dusk approached, the protest continued to weave through the streets, but never turned chaotic — it slowly fizzled out, until eventually ending at 26th Street and Broadway, near where David McAtee, owner of Yaya’s BBQ, was killed by law enforcement.

It seemed like a symbolic win for everyone. The protesters were able to express their anger over what happened to McAtee and Breonna Taylor, who was killed by the LMPD after they executed a no-knock warrant in March. And the police and city leaders didn’t further the fracture between themselves and the public. It certainly didn’t evaporate Louisville’s problems, but we also didn’t wake up to another tragedy on Wednesday.

Tuesday was a night of perpetual motion. Around 7 p.m., a march left Jefferson Square Park, swooped down past the edge of Waterfront Park, found Broadway and returned to the Square. Around 9 p.m., at Jefferson and Sixth Street, it momentarily felt like another confrontation might happen between protesters and police, but the authorities didn’t march into the gathering, and shortly before dark, the march continued. From there, people on foot and cars moved side-by-side, traveling through Phoenix Hill, The Highlands, back through Downtown and on to the West End. Protesters and police only momentarily crossed paths around midnight on Broadway. Protesters chanted “Hands Up, Don’t Shoot,” and the authorities let them pass.

Some officers and protesters fist bumped each other.

The march stretched on for well over 10 miles, and some people in the neighborhoods stood in their yards, fists in the air, in solidarity with the protesters. Throughout the evening more and more cars joined, picking up people on foot. By the time the caravan passed the federal courthouse on Broadway on the march to 26th Street, there were more cars than pedestrians, and it almost looked like rush hour traffic. The more the night progressed, the more the tension seemed to ease. The past week has been littered with uncertainly, but there was a sense of calm throughout the crowd last night when it became apparent that the march was going to be able to continue well past curfew.

The biggest takeaway from Tuesday night is that nothing bad happened.

No one lost their life.

No one was pelted with rubber bullets.

People were looking out for each other. It was a call for change and nothing else.

But, it also begs the question: Why couldn’t have Sunday night ended like this? Why was tear gas released at 8:20 p.m. downtown that night? Why did the military go into The West End that night? Tuesday was identical to Sunday during the day, and completely different at night.

Did it have to be?