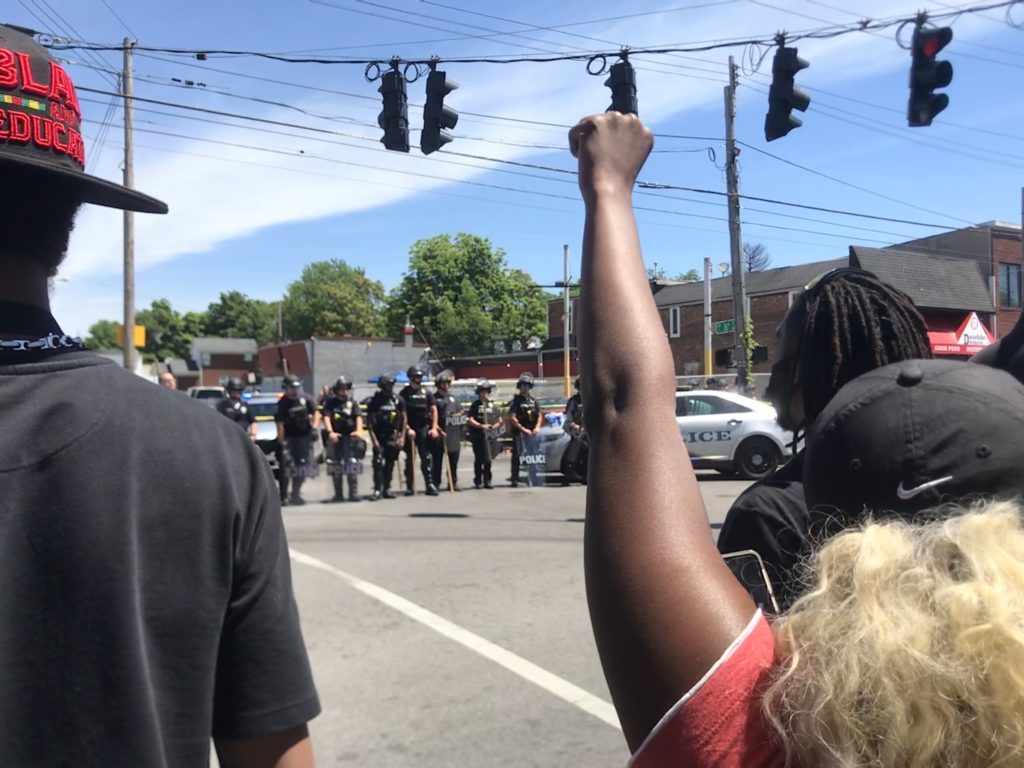 [Editor’s Note: On Tuesday, The Louisville Metropolitan Police Department released footage that they said showed David McAtee firing first at police and the National Guard before being shot. You can watch the video here. Based on the footage, LEO cannot confirm if McAtee fired and, if he did, whether he fired first.]

Why were Louisville police and the National Guard in The West End after midnight on Monday when the protests that evening had occurred mostly downtown?

Why, 11 hours later, was David McAtee’s body still where he was found dead, after police and the Guard fired in his direction?

And, the question that is behind the protests and why police and Guard were on the streets:

Why are Black people constantly losing their lives during encounters with law enforcement?

These are the questions that the crowd at 26th Street and Broadway was asking as they gathered at 11:30 a.m. Monday to talk about and mourn McAtee’s death. McAtee had owned a barbecue business at the intersection.

“I have no information on what took place, but I do know that a trained professional fired rounds toward an unarmed Black man. At the end of the day, there’s a Black man dead and a trained professional living,” said Jerron Thomas, a Kentucky State University student and West Louisville resident. “I’m down here because that could have been me.”

Several hours after the gathering, Mayor Greg Fischer fired police Chief Steve Conrad, who was under withering criticism in the Breonna Taylor case and had agreed to retire by June 30. Fischer said the officers at 26th Street and Broadway had not used their body cameras, a violation that demanded Conrad’s firing, calling it “an especially grievous error at a time of such heightened focus on police activities.”

At a press conference, Conrad’s replacement, interim Police Chief Rob Schroeder, said he did not know yet who shot McAtee, but two National Guard members and two Louisville police officers fired their weapons in the incident that ended in McAtee’s death. They were returning fire after an unidentified suspect or suspects shot at them, according to Schroeder.

“At this point in the investigation after last night’s events, we do not know actually who shot him,” Schroeder said. “We do not know if it was related to a separate incident, if it was due to the shots by our officers and the National Guardsman and soldiers that accompanied them.”

The police and the National Guard were called to 26th Street and Broadway to disperse a crowd at the nearby Dino’s Food Mart, which had gathered after curfew.

Several community members at Monday morning’s gathering said that people often hang out at Dino’s, so this late-Sunday night crowd was not unusual.

As the public calls for Fischer to leave office, too, he attended the gathering and spoke with McAtee’s mother, expressing at the press conference “deep sorrow” at McAtee’s death and vowing to “get to the truth” of what happened.

“We had a horrible tragedy last night at 26th and Broadway,” he said. “We lost a wonderful citizen named David McAtee. David was a friend to many, well known, a barbecue man that nurtured so many people in their bellies, in their hearts. And for him to be caught up in this and for him to not be with us today is a tragedy.”

Several people at 26th Street and Broadway Monday said that McAtee was a familiar sight to many in the community.

“I come here a lot, and I eat food. And he was a nice gentleman, never threatening, aggressive, anything,” said Joshua Smith. “Like, he sold food to the neighborhood. So, for him to get, wrong place, wrong time by the police, that’s like, why?”

The crowd stood across the street from Dino’s, facing a line of police officers who were guarding the crime scene. They occasionally pushed out into the road but organizers with megaphones guided them back, saying, “Do not cross the shooting line.”

The organizers paced in front of the crowd, preaching their grievances to a receptive audience.

“They treat [n-word]s like dogs,” said one Black man in response.

“No, they don’t,” replied one woman. “They treat dogs better than us.”

Frank Smith, the president of the Interdenominational Ministerial Coalition, who stood at the front of the group, told LEO that he came to 26th Street and Broadway to learn more about what happened to McAtee. He was not surprised by the mood of the crowd he found there.

“This is indicative of years of neglect, years of unjust acts, years of mistrust given that there have been people who have been shot by police, and they’ve been exonerated,” he said. “We just have to get this resolved and get the policies in place that let the civilians know that we are serious, and they are serious together with us about taking sure that we are treated in a equitable fashion.”

Schroeder said the reason police left McAtee’s body where he was shot was because police needed to gather evidence.

After the small group of officers swathed in riot gear left around 3 p.m., the crowd cheered.