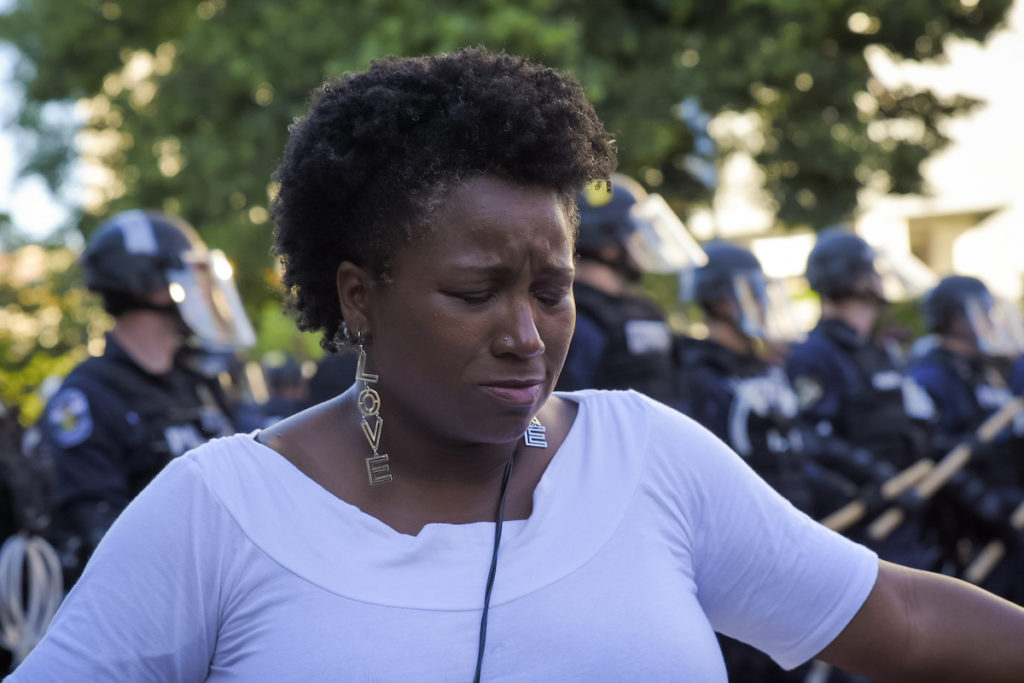 Forty minutes before the 9 p.m. curfew Sunday, police dispensed tear gas, dispersing a crowd of hundreds in Jefferson Square Park downtown. Early Monday morning, the LMPD and the National Guard moved in to clear a group of people from a parking lot at 26th Street and Broadway, more than 20 blocks from where the protests initially occurred. They claim someone fired a shot, so they returned fire. David McAtee, owner of Yaya’s BBQ Shack, was killed — someone known for commonly giving local police free food.

On Tuesday, police released a video from surveillance cameras that they say showed McAtee firing a gun outside of his business, but the footage is unclear, as it partially loses sight of him as he exits his restaurant. Police had their body cameras turned off, so an angle from the officers isn’t available.

Earlier, Sunday didn’t seem like it was spiraling toward tragedy, as the fourth day of protest was tense but largely peaceful, with waves of people downtown who seemed local, nonaggressive and focused only on protesting Breonna Taylor’s death and other instances of police violence. Firing tear gas at a calm crowd or letting the military loose in the West End in no way seems like a reasonable reaction to what we witnessed yesterday. And now a beloved member of the community is dead.

LEO followed the protesters for several hours. Here is an approximated timeline of what we experienced.

“We want peace,” Booker said. “We’re standing because we deserve peace. This is about our humanity. No matter how the sun has kissed your skin, you know if someone hurts your Black brother or sister, it hurts you too.”

Booker went on talk about how structural racism has endangered people of color.

“You may be seen as a deadly weapon, before being seen as a human being,” he said. “It ain’t right. And it’s hurting all of us.”

After the speakers finished, the vast majority of the crowd left, many of them walking East toward cars parked in the Nulu area.

4 p.m. — We walked through Fourth Street Live. Every window was boarded up with the exception of those at the Fifth Third Bank, which I assume invests in the strongest windows money can buy. Only a few other people were there checking out the damage, most of which was cleaned up. It was almost silent, extremely strange and felt walking through a ghost town.

4:30 p.m. — Two groups formed at Jefferson Square Park. One appeared to be a church group and was holding a small service. The other group was organizing a march. Shortly thereafter, about 100 to 200 people marched east down Jefferson Street, with the LMPD and the National Guard following behind. The group took a left on Second Street and another left on Main Street. Most of the group stuck together and kept moving, but about 20 people turned to face the police. Each time the police got near them, the protesters eventually moved back. A member of the police department was on a bullhorn, calling the situation an unlawful gathering and saying that if people didn’t disperse, they would release chemical agents. By the time the police reached Sixth Street, most of the crowd had already had continued to the Muhammad Ali Center. A small group stayed at Sixth and Main streets, but at that point there were more members of the police and the National Guard then there were protesters. It eventually deescalated.

5:30 p.m. — Speeches were delivered in the amphitheater outside of the Muhammad Ali Center. People sat calmly, cheered and handed out water to each other. The police didn’t follow them, instead moving back to Jefferson Square Park. The tension evaporated. Moments like this tend to understandably get buried or untold, because there are more critical and tragic elements to report and discuss, but this was a powerful part of the day from a gentle group of people, who were clearly there to pursue justice, not to create any sort of violence.

7 p.m. — Back at Jefferson Square, there were only a few protesters, but the park was covered in police officers and National Guard members.

7:30 p.m. — A large group of protesters marched down Liberty Street, stopping at the park. They formed a few lines, one facing the police and one that went across Liberty, facing East. The crowd mostly just chanted, remaining peaceful. A police drone hovered above the crowd.

8 p.m. — A few members of the crowd told people to consider going home, especially if they were with children, and a couple hundred people left, walking down Sixth toward Broadway. The people who stayed remained collected. I walked through the entire crowd and there didn’t seem to be groups of people trying to ignite any sort of violence. Most people appeared to be with a significant other or a small group of friends. If anything, for at least a moment, it seemed to be possibly winding down.

8:20 p.m. — Tear gas was released. When asked why the police released tear gas before the curfew, police Col. LaVita Chavous, assistant chief of the police, said at a 10:45 p.m. media briefing that it had turned into an “unlawful gathering” because protesters were blocking the road and didn’t have a permit.

She said protesters had leaf blowers and umbrellas, which she said can be used to “blow back chemicals into the police face.”

Many constituents have similar concerns. We can’t tell people to protest peacefully and, after the fact, say we can gas you anytime if you don’t have a permit. The public deserves an investigation & report-from an independent oversight system it can trust. https://t.co/ipVV0N8k5W