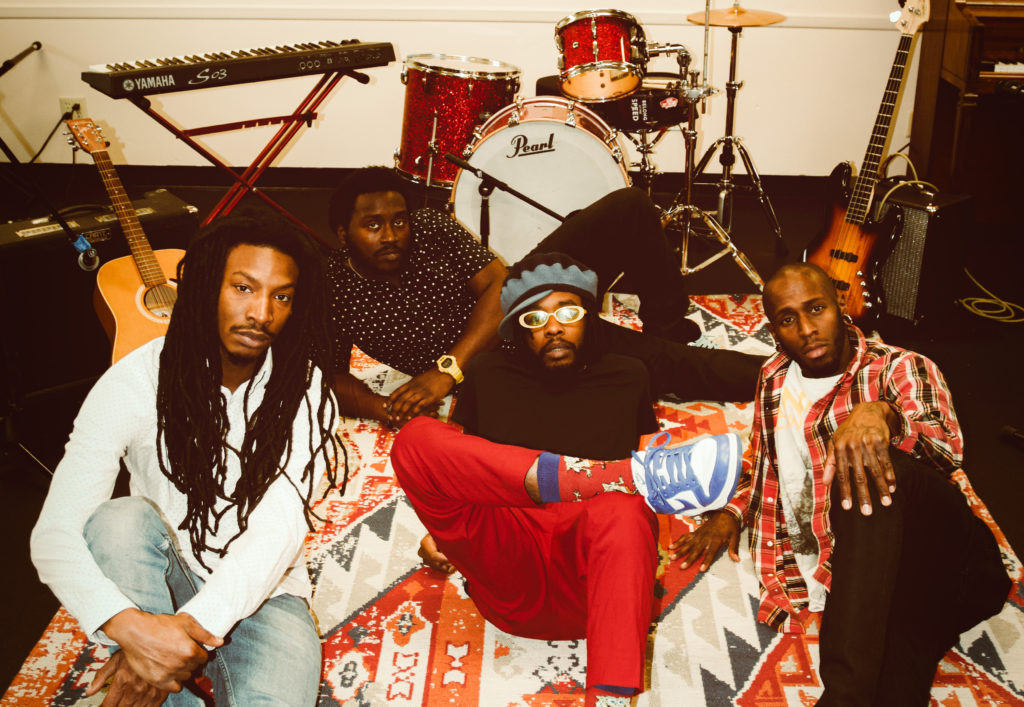 The four-piece band PAKG uses emotionally-driven, versatile indie to cut to the core of the human condition. And, even though their new album Teddy was recorded in February, before the pandemic and social movements started to change the course of the world, the themes and concepts on the record reflect the personal struggles that tough times bring.

“I like to consider it fitting for any time that’s tumultuous or difficult to get through, and it’s more so on an internal basis, not really external,” singer and guitarist Dre Smith said. “We’re in war, and this battle is going on all around us, but the album speaks about the battles that go on inside of ourselves.”

Teddy was released on June 19, and, in many ways, it’s a continuation of PAKG’s debut album, The Kids Are Watching, which was released in the fall of 2019. PAKG, which is an acronym for Producing A Kind Generation, focuses on the idea that to change the world around you, you have to find a way to build a better version of yourself. And, for the 30-year-old Smith, that mission was sparked by fatherhood.

Teddy delves into the peaks and valleys of being alive, with a strong emphasis on working to break out of negative situations before they cause a downward spiral. The seventh track on Teddy is “My Dark Perspective Pt. 2,” which is a sequel to a song from the first album. Smith said the two parts of “My Dark Perspective” are about the fork in the road when you’re dealing with rough times and taking the wrong path. The first part is about when you take that negative energy and use it as a springboard to make a bad decision. The second part of it is about coming to terms with the downward spiral that you’ve created, and pulling yourself out of it, attempting to become a better person.

“Say you do something and you had a rough day or whatever, and instead of doing something productive, you choose to go out and indulge in some vices, you want to use some drugs, you want to drink some liquor, you think that will make you feel better, but the next day, when you get up, you feel worse than when you were going through the shit, because now you feel weak,” Smith said.

An interesting thing about music release cycles is that by the time the public gets to consume an album, the person who wrote it might be in a very different place. That’s what Smith says about both parts of “My Dark Perspective.” He’s currently doing well, but other people are currently where he was when he was living through that story.

“That song doesn’t really relate to me right now, but I know someone else needs it,” Smith said. While the first two albums have been more about what we’re each silently struggling with, the material that the band has recently been writing is very tuned in to what’s happening in society on a day-to-day basis.

“We’re very, very locked into what’s happening currently in our world and how we can make a change moving forward,” Smith said. “So, the [currently unreleased] music is more of a call to action, in terms of my writing right now. It’s not as gloomy, or passive-aggressive. We’re definitely writing about what’s happening now, and what we see happening in the future, and how we can contribute to that. We try to make sure our writing always matters, and holds some weight.”

Smith was raised in West Louisville. His first experience in music was as a hip-hop artist, reflecting on his experiences growing up in rough circumstances. But, with a wide range of musical influences, he was also drawn to other styles.

“I always wanted to be a blues artist or a rock-and-roll guy,” Smith said. “My grandmother played James Brown in the car and B.B. King and Otis Redding and The Isley Brothers — a lot of great stuff growing up. But, in my neighborhood, that wasn’t a thing to do. If I did that, I would have been weird. I would have been an outcast.”

Smith and his bandmates in PAKG — drummer Kym Williams, bassist Aaron “Ace” Holmes and guitarist Jewan “Pinky” Clay — come from different music backgrounds, and that shines through on Teddy. There are elements of atmospheric indie, heavy rock, funk, hip-hop and post-punk mixed together seamlessly. The combinations are careful and subtle, never overwhelming or convoluted.

“How we collaborate, we really just do what we think is right, per our instrument, per the record,” said Williams.  PAKG’s unique sound has caught the attention of another Kentucky band, Cage The Elephant, who were scheduled to headline Forecastle 2020 before it was canceled due to the coronavirus.

“They liked a bunch of our posts on Instagram and then they followed us, and started sharing our content on their page, and then they reached out and said they loved the sound and that they wanted to endorse the work,” Smith said. “It was cool. A very organic experience. And they’re beautiful people. It felt incredible, being recognized by some Kentucky rockers during these tumultuous times.”

Teddy is streaming exclusively on Bandcamp and will hit other digital streaming services on July 27.