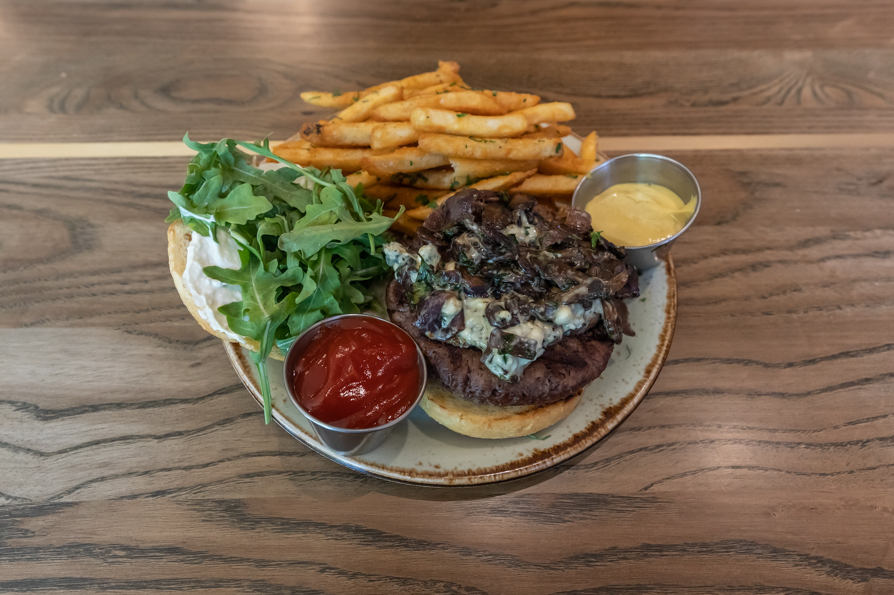 In the not-so-distant past, when a chef set out to make a vegetarian or vegan burger, the only choice was DIY. Now, there are choices, and area chefs are taking varied approaches to serving burgers that satisfy while at the same time mimicking a beef hamburger as reasonably as possible.

Kristina Addington launched her V-Grits food truck about five years ago, before options like the Impossible Burger were available. So, she set out to make something as realistic as possible, experimenting with a blend of wheat gluten and crimini mushrooms, while conducting taste test after taste test, to finally create what she called the V-Burger.

Today, her V-Grits vegan restaurant serves the Beyond Burger, an Impossible Burger competitor.

Across the river in New Albany, Chef Zac Young is serving the Impossible Burger at The Exchange Pub + Kitchen, offering his customers the option to top theirs in the themes of the three basic beef hamburgers on the menu. For a slight upcharge, just replace the beef patty on one of those with the Impossible.

And at Grind Burger Kitchen, co-owner Jesse Huot continues to serve a house blend for the burger substitute some his customers seek, offering some signature options that can become veggie with a simple patty switch, along with a list of topping options if someone would rather build their own.

That there’s not a consensus on one way of doing it reflects many things, from simple demand and time constraints to individual product preferences. For Addington, it came down to a couple of things — making the original burger from scratch was time-consuming, for one, and also because she tasted the Beyond Burger and liked it. Not only did it make sense from a labor aspect, it was a product she was happy to serve her customers.

“Personally, I just like the taste of it better,” Addington said, comparing the Beyond to the Impossible. She also cites an “ethics” preference for Beyond Meat, the company that makes the Beyond Burger. (Late last year, a food safety watchdog group asked the U.S. Food and Drug Administration to stop sale of the Impossible Burger due to a genetically engineered heme, an iron-rich molecule found in meat. Federal officials declined to do so.)

To differentiate from other restaurants that might use the Beyond Burger, Addington said, she and her staff use primarily house-made toppings, from vegan cheese to vegan mayo. In addition, a “classic” style burger is always on the menu, along with an option called “Animal Style” (patty melt-style, on Texas Toast) with weekly specials rotating toppings and themes to help keep the options fresh.

Also, fans of the original V-Burger should note that V-Grits still serves that original brine-cooked burger blend as chicken fried steak and other rotating items.

For Young, his decision to go with the Impossible Burger largely came down to texture.

“I think texturally the Impossible burger is closer to what people are used to as far as what ground beef is,” he said, explaining that it resembles ground chuck, whereas the Beyond Burger is more “soft.”

“I’ve used both in different capacities,” he said. “As far as just putting a burger on a grill and getting that classic Americana thing going, the Impossible captures that essence a little better. It resembles ground beef more. It’s a fresh product and I like to use fresh products as much as possible. You can really get that char thing going on there.”

Many of the burger options at The Exchange ­— such as the signature house burger topped with arugula, Madeira mushrooms, Stilton bleu cheese, grilled red onions and garlic labna on a brioche bun — still make the Beyond version a vegetarian and not vegan option, but it’s easy enough to leave the cheese out of the equation. Also, a vegan mayo product called Vegenaise is available as a substitute.

At Grind, Huot pushes forward with his house blend of chickpeas, lentils, quinoa, mushrooms and roasted vegetables, topped with smoked tomato ketchup, lettuce, tomato and onion because, as much as anything, if it ain’t broke, don’t fix it. The burger, which was featured on Food Network’s “Diners, Drive-ins and Dives,” is gluten-free and is popular with many of Grind’s customers.

“Sales of the veggie burger are good,” Huot said. “It just didn’t seem to warrant a second, similar product. Sometimes at Grind, we pull things off the menu and people get pretty upset, so we just kept going with it.”

Plus, a lot of work went into creating the unique burger blend — three or four months, according to Huot. And, he added, it’s important enough to him and fellow owner Liz Huot to treat the veggie burger with the same attention they treat their beef burgers.

Similarly to V-Grits, special versions of the burger are sometimes offered, but, for the most part, it’s an approach like that at The Exchange, wherein you either substitute the veggie patty for meat on a signature item or simply build your own with the toppings available, from caramelized onion to spicy pickles.

But there’s another reason he stuck with his house creation. Huot said some of his customers have told him they don’t care for the Impossible because it is actually too much like beef.

“They say it doesn’t entice them to eat something that still looks like the flesh of an animal,” he said. “The Impossible Burger rep told me that. He said it’s really for meat-eaters with cholesterol issues. After he said that, it confirmed I really didn’t want to go in that direction.”