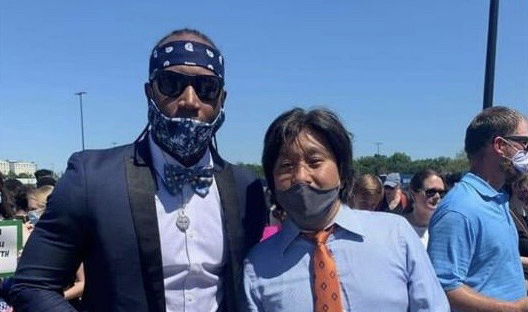 Darnell Ferguson had already decided that he was going to do it: plan a Unity March for Black people killed by police. But, when it came to promoting the event on social media pages for his restaurant, SuperChefs in The Highlands, he hesitated.

“What are these people who don’t believe in Black Lives Matter who come to my restaurant going to think?” he asked himself. So, he said, he channeled the bravery of his role model Muhammad Ali and posted.

“I’m like, you know what, I’m willing to sacrifice everything for this,” he said. “This is so big. I’m so tired of every time I get pulled over of always being afraid. I’m so tired of when my kids get older, having to worry about them. I’m just like, I’d rather lose all my restaurants from people who don’t agree with it than to sit back and just do it on my own personal page.”

SuperChefs’ Ferguson is one of several Louisville restaurateurs who have chosen to mix their personal beliefs with their businesses by working to promote racial justice in the weeks since police killed Breonna Taylor and a National Guard soldier killed David McAtee, a chef himself.

Chik’n & Mi planned an Evening of Healing in support of Black artists and the nonprofit Change Today, Change Tomorrow. The restaurant is also collecting donated items and money for the nonprofit’s #FeedtheWest initiative, as is Blue Dog Bakery & Cafe, which has been posting consistently in support of the Black Lives Matter movement on social media. Galan’s Meat Market & Deli in The West End has sold food at a reduced price to activists. And, Chef Edward Lee has closed his downtown restaurant Milkwood and turned it into the McAtee Community Kitchen to serve free meals to families in need and lift up Black leaders in the culinary space.

For Chik’n & Mi General Manager Lucas Worley, supporting Black lives was simply necessary. “I think that anybody that can have a platform to speak out about things, it’s important to do so right now, and I really think that it takes everybody doing everything to kind of get some momentum with the movement,” he said.

Racial justice is important to many Chik’n & Mi employees, Worley said. At first, they joined the protests. But, because of their jobs, they weren’t able to be as active as they wanted. So, they decided to work within their jobs, too.

It started with donating staff tips. Then, Chik’n & Mi became a drop-off location for #FeedtheWest, which collects groceries for West End residents. Last Wednesday, the restaurant partnered with A Well Written Photograph, a Black creative collective, and hosted its Evening of Healing at the restaurant’s new Butchertown location, featuring Black vendors and performances from Black artists.

For Kara Hancock, head of pastry and social media at Blue Dog Bakery & Café along Frankfort Avenue, it would feel wrong for her business to stay silent about Louisville’s racial inequities.

The first weekend of protests, she said, she felt “sick” thinking about the recent killings. Coming back to work and back to posting to social media, she didn’t want to throw up a picture of “bougie food” without acknowledging what was going on. So, she texted one of the owners, Kit Garrett.

“I know you don’t want us taking political stances,” Hancock wrote, “but this isn’t a political issue, this is a human rights issue, and it’s a social issue and it’s something that needs to be acknowledged and needs to be addressed.’”

Garrett gave her the go-ahead and has been supportive since, Hancock said — even as she’s continued to post consistently about the Black Lives Matter movement. Blue Dog has also started collecting donations for #FeedtheWest, and last weekend, the bakery donated 10% of is pastry sales to the ACLU of Kentucky as part of Bakers Against Racism.

In a post on June 12, Hancock wrote, “Yeah, we get it; we’re a bakery, you want bakery posts. But this is a problem that won’t go away unless we keep talking about it, and more importantly, DO something about it.”

Carlos Galan, co-owner of Galan’s Meat Market & Deli, felt compelled to support the Black Lives Matter movement because he said he has experienced racial tension as a Hispanic man. And, he wanted to support his customers, about 80% of whom are African American, according to Galan. “You know, it’s great for you to use your platform in the world and tell the people in the community, also your customers, that we’re with you,” said Galan.

Not everyone has gotten solely positive feedback for taking a stand. Ferguson ended up receiving some backlash for planning the Kings & Queens Unity March. He was sent messages on Instagram asking him not to bring “rioting and looting” to Jeffersontown where he planned the march. (Jeffersontown is where Ferguson lives, and his Facebook event asked marchers not to loot, riot or disrespect police officers.)

But, the day of the march — June 7 — over 200 people showed up, peacefully walking from AMC Stonybrook 20 to Malibu Jack’s, and Ferguson experienced an environment he never had before — one where he was able to say “black lives matter” without it being countered with “all lives matter.”

When Ferguson was first considering planning a march, he thought about how, in the future, he would feel about his actions today. “I feel like what’s going on now is going to change history for us,” he said. “This is different than what we’ve see in the past. So, I just didn’t want to look back on myself 20 years from now and say, I didn’t do anything. I just sat back and watched everybody else fight the fight.”