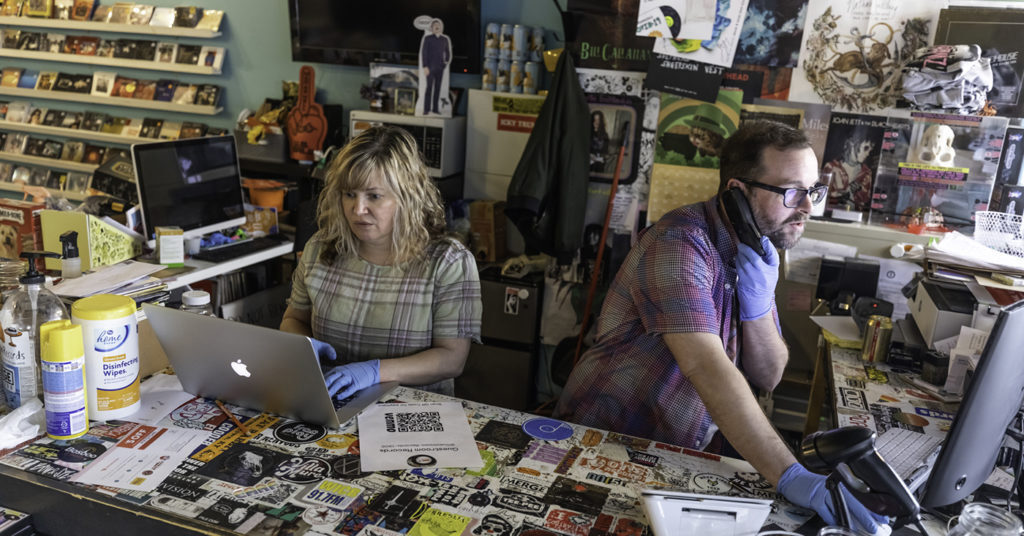 Brett Ralph was initially nervous about reopening his record store and book shop Surface Noise on June 4, worrying that we were still too deep in the pandemic. But as the store’s regulars migrate back, with safety and distancing measures in place, it’s been reassuring to Surface Noise’s goal — to be a neighborhood cultural nerve center.

“It reaffirms that the store isn’t just a part of a creative community, but also a physical community,” Ralph said. “It’s part of Irish and Phoenix Hill, and we’ve been closed for three months, and it feels really good to be open again.”

Many local record shops closed before they were required to back in March, and some are opening later than May 20, when retail was allowed to reopen in Kentucky. That’s because they face challenging circumstances. Most independent record stores are small spaces with thousands of items. Customers are generally in close proximity and touching the same things. In Louisville, record shops have been both scrappy and safe during the coronavirus, setting up online stores, curbside pickups and deliveries. As they slowly start to reopen their doors to the public, they are also taking careful precautions.

At Surface Noise, a mask is required, and Ralph gives customers a pair of gloves to use when combing through records that they can throw into a bucket as they leave. The store has three rooms, and Ralph generally wants only between two and four people in each room, but he hasn’t had any problems with capacity yet. 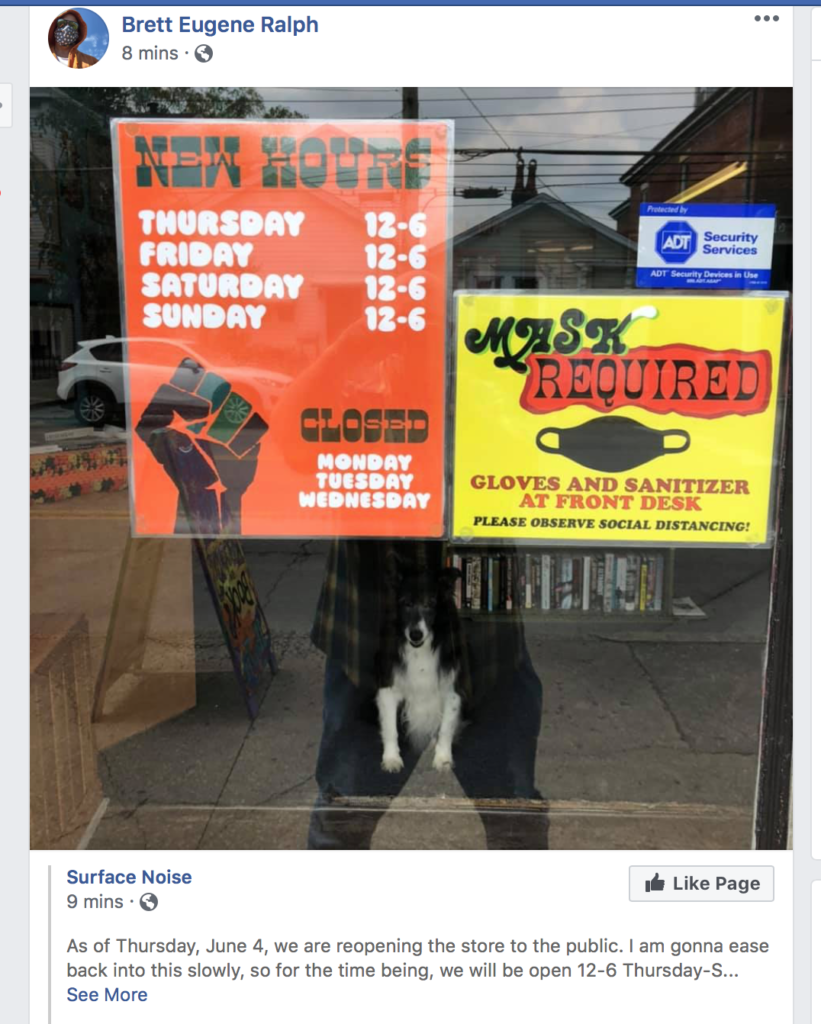 While local record stores kept active during the time their customers had to quarantine, as they found safe ways to sell records, the in-store experience of these shops — the people you meet, the conversations, the hunt for vinyl — is irreplaceable.

“Going back to when I was a teenager, my favorite thing to do after dinner, or on a rainy day off, was to go on a drive and go to a book store or a record store and poke around,” Ralph said. “It’s the perfect combination of solitude and community.”

Better Days Records on Bardstown Road reopened on June 1. Manager David Stockhoff said that employees are wearing masks and have a shield set up at the cash register. They have no requirements for customers but ask people to be respectful and use common sense. He said Better Days waited a few extra weeks to open for safety reasons.

“It’s a very tactile environment, so it makes it difficult to determine how open you really want to be, because there’s only so many surfaces you can clean so often, while doing the other things that you need to do,” Stockhoff said. “So, we were trying to find that balance as we were deciding when we would reopen.”

Guestroom Records tentatively plans to reopen on Tuesday, June 16. Owners Travis Searle and Lisa Foster said they will get a COVID-19 test before reopening, just to make sure they don’t have the virus, and they’ll also have safety precautions in place. Stay tuned to the store’s Facebook page for details.

“We have to sort of reconfigure the space, which means we have to move some stuff out of here,” Foster said. “It’s a bit of an undertaking just to think about doing it safely inside the space.”

Throughout the time Guestroom’s doors have been closed, Searle and Foster have been in the store six days a week, answering calls, responding to emails, replying to requests on social media. Like many stores, they’ve been selling records via curbside pickup, delivery, through a recently-created web store and by mail order. They estimate they’ve been doing about half the amount business as usual, which they’re happy with, all things considered.

“People are definitely still buying things, and I would say they’re buying them in ratios that are pretty similar to what people would be buying if we were open open,” Foster said. “It’s just that the quantity is just much less.”

While this time has obviously not been ideal for the store, there have been moments of success. Searle said the new Jason Isbell record, which was released in independent record stores on May 8, a week before everywhere else, might be the most copies of anything they’ve ever sold in a two-week time period. They’ve also had featured artist selections. In late May, they ordered a bunch of Nina Simone albums and put them all on a wall near the front window, so people passing by could see them, and they also took a picture and put it on social media for customers. These tactics have allowed them to continue to recommend things, without face-to-face interactions.

They’ve been experimenting in order to stay active, but they also look forward to reopening their doors.

“We’re going to get there, but in terms of back to normal, nobody has a crystal ball on this one,” Searle said.