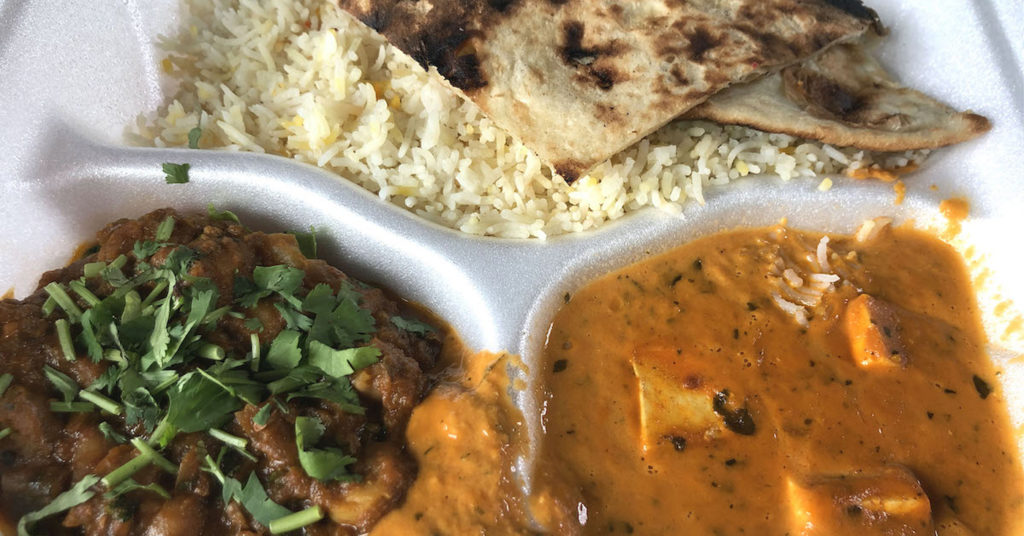 When the pandemic abruptly shut down all the restaurants in March, Dakshin Indian Restaurant’s owner Sanjay Taxak took many of the same steps as other local eateries: He started offering takeout service and curbside pickup, and he began offering his restaurant’s Indian fare delivered via Grubhub, Postmates and Uber Eats. But that wasn’t enough. Taxak was making and serving the food that he loves, but the situation left a hole in his heart. A lot of people were suffering. Furloughed, out of work, families would have a hard time feeding themselves. He couldn’t imagine his two children going hungry, and he didn’t want to think about it for anyone else. So, Taxak got busy.

He worked out the numbers, then taped a neatly hand-lettered green cardboard sign to Dakshin’s front door: “We will be offering FREE FOOD through our CURBSIDE PICKUP for those who need Assistance during these HARD TIMES,” he wrote.
“Because of the COVID-19 Pandemic and Shutdown, there will be prepared VEG and NON-VEG options.” And so it is. A tall warming oven now stands out front of his Eastland Plaza shop, ﬁlled with white plastic foam containers laden with delicious Indian fare. Stop by, take what you need — take care to use the spray bottle of sanitizer on top of the warmer box — and enjoy your meal.

Meals are available 11 a.m. to 2 p.m. Monday through Friday and 5:30 pm. to 8 p.m. seven days a week. He’s been operating for just over 50 days and estimates he gives away 60 to 80 meals on weekdays, 80 to 100 on weekends. That works out to something like 3,500 meals handed out so far and he has no intention of stopping. What’s in the free-lunch box? It’s a surprisingly generous portion. The bill of fare changes according to whim, Taxak said, but it usually includes chicken tikka masala (for the meat option) or paneer tikka masala (for the vegetarian lunch); a vegetable entrée such as bhindi (okra) masala, chana (chick-pea) masala, saag paneer (spinach with Indian cheese), mixed veggie korma, kidney bean masala or, well, whatever he’s in the mood to make; a generous portion of rice; and a couple of quarters of naan ﬂatbread.

You’re also welcome to call in and talk about special requests such as vegan, nut-free or other allergen-free options, and you don’t have to prove your ﬁnancial distress to share a meal. If you’re out of work, underworked or looking for work or, frankly, if you just plain want to eat for any reason, come. Taxak will welcome you with a hefty meal container and a friendly smile. “I don’t judge who needs and doesn’t need it,” he said. Perhaps channeling Gov. Andy Beshear, he added, “We are all in this together, and we will come out of this all together.” We took a couple of lunches the other day, insisting that he take a $20 bill that he tried to wave away and got delicious Indian meals with two entrées, rice and naan. (We also got a demonstration of Taxak’s ﬁerce attention to sanitation in this perilous time: He not only sprayed the boxes with sanitizer, but he even sprayed my fresh-from-the-ATM $20 bill.)

The chicken tikka and paneer tikka, respectively, offered bites of tender, bone-less chicken white meat and cubes of ﬁrm, grilled, white cheese swimming in silken, pale-orange sauce. A veggie masala offered long-cooked chickpeas, okra rounds, mushroom and onion in a thick, spicy dark-brown sauce. Both entrées would rate at least three on the hot chile pepper scale, and there’s no obvious way for the fearful to avoid that, although if you call ahead, I’m sure he’ll make a mild meal to your liking. Or, of course, if you’re paying, you can go to Dakshin’s extensive online menus that feature regional cuisines from all over the subcontinent and choose the dishes you like at the spice levels you like. For his boundless generosity, stop by. Grab a meal or two from the box. And pay it forward by handing him enough cash to cover a couple more free meals.