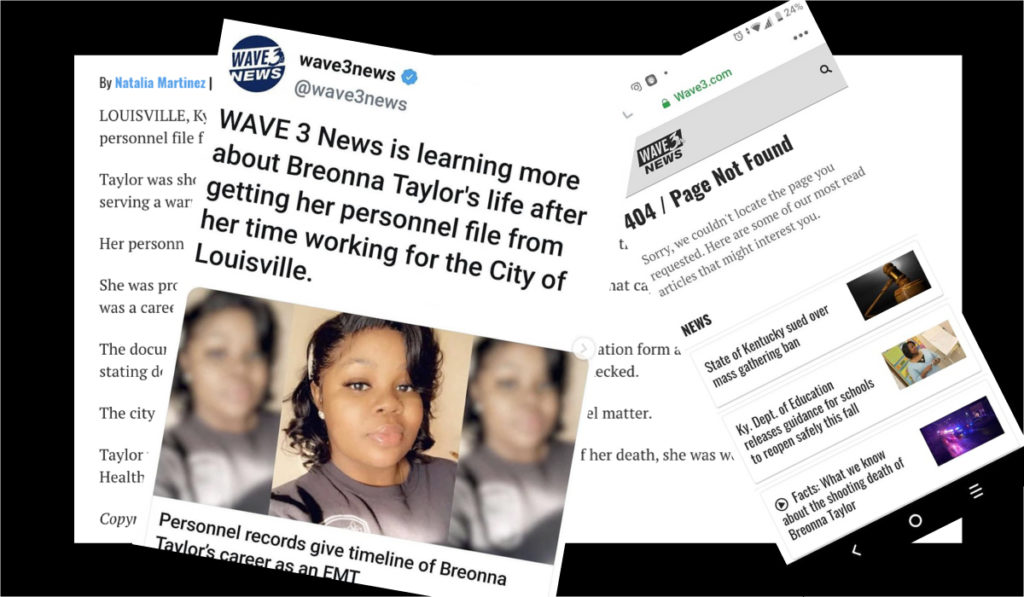 The coronavirus pandemic has repeatedly highlighted the critical role local journalism plays in keeping the public safe and informed, and it underscores our need to continue supporting ethical, quality journalism with our subscription dollars. But the public must keep journalists accountable for their mistakes, especially when their work threatens to make the public actually less safe and informed. Sadly, criticism of journalists as insensitive and opportunistic came to the fore because of a recent investigative story by WAVE 3 News that went viral, reminding us that just because journalists can tell a story doesn’t mean they always should.

This week, details emerged about the death of 26-year-old Breonna Taylor, a local ER technician who was killed by Louisville police in her own home on March 13 during an apparent drug raid gone awry. Already reeling from the murder of Ahmaud Arbery in Georgia, many across the nation are outraged by the death of Taylor, who was not a criminal suspect and had no criminal history. Tensions are high, and the tragedy quickly became a centerpiece of the national conversation about racially-motivated violence, so it’s especially critical for hometown journalists to get the story right — and be fair while doing so.

However, WAVE did no one any good by publishing a brief story by reporter Natalia Martinez that attempted to — in her words — tell more about “Breonna Taylor’s life,” but the story merely whittled Taylor’s life down to a job she held four years ago. (The online story has since been removed.)

Four of the seven short paragraphs in that story were devoted to an 11-month period in 2016 when Taylor worked for Louisville Metro. WAVE reported that Taylor “called” to quit her job as an EMT after serving in that capacity for five months, and that her termination form included a “do not rehire” box that was checked. The city wouldn’t comment on the reason, citing privacy policies.

There’s nothing wrong with correcting misinformation about Taylor’s current place of employment, but this story about her work history four years ago — when she was just 22 — seems to serve no other purpose in the narrative other than to throw her character into question. In this case, mundane details like these matter as much as having a bad credit report or unpaid traffic tickets — which is to say they don’t matter at all — especially because the specific details are unknown.

Even worse, this type of dirt-digging gives fodder to knee-jerk defenders of unchecked lethal force by police officers and detracts from calls for a full accounting into why a young, Black woman’s life was suddenly and violently taken from her. Regardless of the intent of the reporter or the station, the information serves as a smear, useful only to city attorneys and stalwart police defenders but potentially harmful to people who could be victimized by unchecked power in the future.

This is disgusting. @wave3news has nothing better to do than to pull the personnel file of #BreonnaTaylor– a Black woman murdered by the police. I am thoroughly disgusted. Where is the personnel files of the officers that killed her? Pull those @wave3news. https://t.co/P26vXT5x2z

The news media have a long history of attempting to dig up dirt on victims of police violence. The New York Times infamously described Ferguson teenager Mike Brown as “no angel,” a phrase that was later denounced by their own public editor, and then later dug deeply into Eric Garner’s past after he was killed by police. And when 12-year-old Tamir Rice was killed by the Cleveland police, the local news made sure to let everyone know that the lawyer representing his family had previously defended Rice’s mother in court.

Local journalism has faced similar backlashes. When United Airlines dragged Dr. David Dao off a plane in 2017, the Twitterverse dragged the Courier-Journal’s coverage of his past troubles — which they had previously reported, but seemed to come out of nowhere to the story’s national audience. In 2020, “no angel” reporting has become such a journalistic cliché that we’re wondering why any newsroom would breathlessly report any potentially unfavorable yet irrelevant details from Taylor’s life alongside the details of her tragic death.

What does the Society of Professional Journalists’ Code of Ethics say about this practice of digging up dirt on dead victims?

First, the SPJ urges journalists to “seek truth and report it.” But that doesn’t mean journalists should reflexively and indiscriminately put crime victims on blast, because the SPJ also tells journalists to “diligently seek subjects of news coverage to allow them to respond to criticism or allegations of wrongdoing.” WAVE’s Martinez might argue that her article served to correct others who were erroneously stating that Taylor was still employed as an EMT, but placing importance on the way her employment ended changes the narrative. Taylor is not alive to respond to the question of why she resigned, which should give any reporter pause before publishing a story like this.

Second, the SPJ says journalists should “be vigilant and courageous about holding those with power accountable.” Attempting to dig up dirt on a woman killed by armed agents of the state — a woman who was definitely not a public figure — is the opposite of holding power to account.

To be fair, we should point out that it was not WAVE’s only story on Taylor. For example, Phylicia Ashley reported on Taylor’s positive impact on the life of another Louisville citizen, a story that was far more revealing of Taylor’s character than unexplained details from an old employment record. In response to an email from us, WAVE’s news director Dan Fabrizio pointed to this story as an example of the breadth of their coverage.

However, the individual format of such news stories doesn’t allow any web-based news organization’s largely online audience to consider breadth, and as such, Ashley’s story was not enough to keep Martinez’s story from igniting the frustrations of thousands across social media. For Black and brown people, it’s not hard to see the writing on the wall — or screen — regarding how tragedies involving themselves or their loved ones would play out in the press, especially if it comes at the hands of the police.

Did WAVE have the legal right to pore through the public record of Breonna Taylor’s brief time working for Metro Louisville? Absolutely. But that does not mean that they were ethically justified in publishing information that does nothing but conflate the tragic circumstances of another young Black person’s death at the hands of police officers with an irrelevant 4-year-old employment issue.

When we asked him via email why the story was pulled, he wrote: “We reported a fact about her departure from an EMT job that lacked perspective. That raised concerns and questions about its relevance. We had a lot of discussions among members of our news team and with people in the community. The criticism was fair.”

Indeed. There are no angels among us, just humans living their lives. We all have personal and private moments that we would not want to define us after death. To reduce a crime victim — a private citizen without power or institutional protections — to their worst moments or most embarrassing failures is to dehumanize them and justify their suffering while those responsible for that suffering escape accountability. Let’s call upon WAVE and other local newsrooms to do what journalism does best: examine systemic failures, demand accountability, and “give voice to the voiceless.” It’s the least that our city can do for Breonna Taylor, a young woman who worked on the pandemic frontlines for Louisville.

Liz Palmer and James Miller are former media critics for Insider Louisville and have led the Journalism & Communication magnet program at duPont Manual High School for the last 14 years.