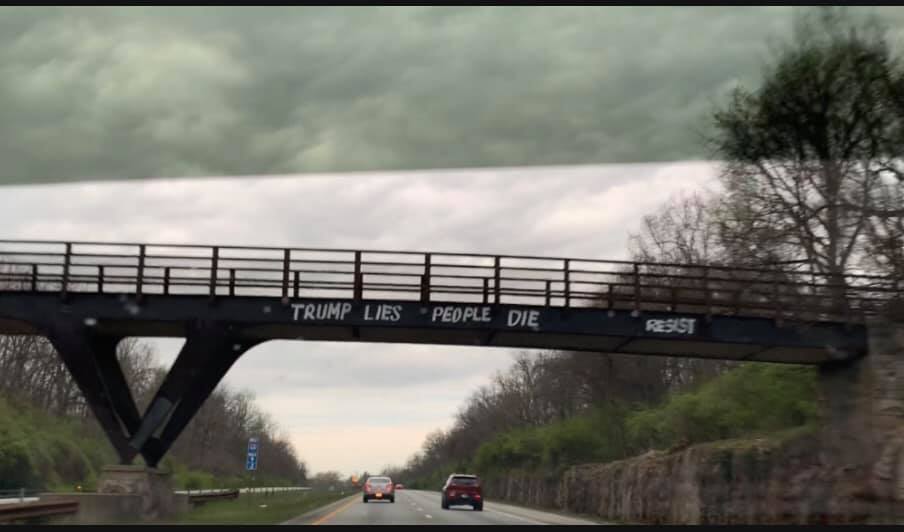 Photos posted by the Louisville police.

Two people have been arrested in connection to anti-Trump political graffiti on Interstate 64 and 65, police said in a Facebook post Thursday.

Sonja de Vries and Robert Eiden have been charged with 34 incidents, which cost the city $43,000 to remove, police said. After their arrest, LMPD learned that the suspects may be responsible for another $25,000 worth of graffiti, according to the post.

“Your right to free speech is protected constitutionally however, spray-painting on property that doesn’t belong to you is a crime,” the post said, adding, “It’s not the crime of the century but there are other ways to exercise your speech and beliefs…legally.”

Eiden and de Vries were part of the Heyburn 9, a group arrested for blocking access to an immigration court in 2018 in downtown Louisville. Eiden and de Vries were two of only three members who did not plead guilty for their act of protest. They chose to go to trial and were found guilty and fined $150 each.

Eiden and de Vries did not return calls seeking comment. [Ed. note: de Vries wrote a story for LEO seven years ago and more recently shared a byline on an op-ed.]

Last May, LEO ran a story about two men behind a Resist 45 graffiti campaign who tagged both public and private property. The taggers said that they did not condone vandalizing private property, but they called it a “necessary evil” to get their message out about fighting for marginalized communities, the environment and other issues.