Thorn: Conrad had to go… yesterday

Where do we start on the police raid that killed Breonna Taylor? How about at the top: Police Chief Steve Conrad needs to go. The list of his department’s failures creates a critical mass that cannot be ignored. Let us not forget that a judge signed off on the no-knock warrant. Breonna Taylor’s death is on your hands.

Thorn: you hide only if you’ve lied

A thorn goes to the city for denying public records in the botched raid including a 911 call recording and police incident reports from the search warrant execution. The Courier Journal’s lawyers are on the case. “We refuse to accept half-baked excuses from these agencies determined to keep these records private and hidden from the public’s eye,” said editor Richard Green.

Was WAVE 3 News thinking it was practicing journalism by detailing the personnel file of Breonna Taylor? She was not a suspect and shouldn’t be treated like one.

In other Cops Gone Wild news, the Audubon police apologized for a “Three Percenter” bumper sticker found on a cruiser. Three Percenters say on its website:  “We do not seek to incite a revolution. However, we will defend ourselves when necessary.”

Absurd: has to equal child abuse, no?

An absurd goes to The CJ  for the twisted irony of having U.S. Mitch “Destroyer of Democracy” McConnell read “Good Night Kentucky” for its famous-people-get-clicks series. Next up, Darth Vader reads “Twinkle, Twinkle, Little (Death) Star.” 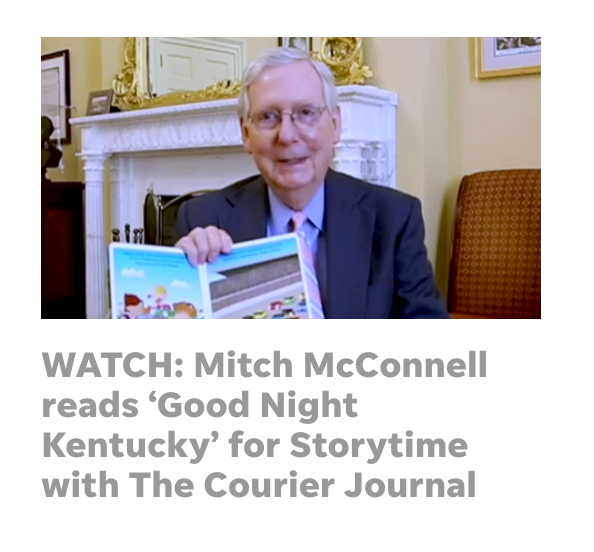 One in the parade of our local clowns (Rick Pitino, Rand Paul, etc.), Papa John Schnatter is on TikTok showing off his greasy pizza pad. First up, a giant, wooden clock depicting two eagles mating. Seriously... Here is what he says: “Eagles go up several thousand feet and mate all the way down. Right before they hit, they separate so they don’t get hurt or killed. Perfect timing.”