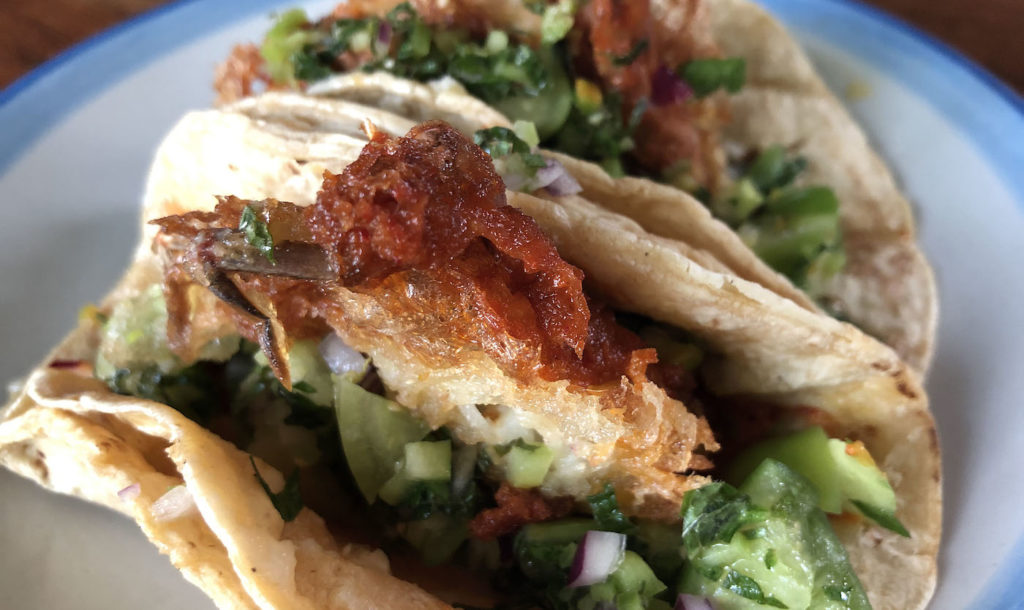 It all started, as things so often do, on social media. I was browsing Instagram, tapping through a lot of the local restaurants that I follow, when a simple white-on-black text image caught my eye. “Taco Tuesday,” read the post from Red Hog Artisan Butcher. And then the clincher: “Fried Soft-Shell Crab Tacos!”

“Taco Tuesday is just around the corner,” the restaurant posted below the alluring image, “and we are getting live soft-shell crabs boat direct from @teamseafoods. We can’t wait to feed you Red Hog Lovers!”

“I NEED the crab taco,” a fan responded within seconds and before you knew it, Red Hog’s post had 79 likes. Mine was one of them, and I raced down the link to their website and then their voicemail, hoping to get an order in before they ran out.

As it happens, Red Hog is closed Mondays, so I had an impatient overnight wait before connecting with a worker there at opening time, 11 a.m. I must have been first in line, as they told me the soft-shells were just coming off the truck and not even in their point-of-sale system yet.

Fine! “Just reserve me one?” And so they did.

Soft-shell crabs, as you likely know, are a seasonal regional delicacy along the Atlantic coast from Maryland or thereabouts down through Virginia and the Carolinas.

“Each year, North Carolina’s blue crab population sheds its skin as water temperatures rise,” explained writer Ashley Morris at the Wilmington Star-News in North Carolina, where soft-shells are a local treat. “They begin to take on more seawater and let their flesh expand until their shell cracks. As they leave their hard shell behind, crabs almost immediately begin to harden, so harvesters have mere hours to take them out of the water in this state. Once they lose their shell, crabs are at their most vulnerable state and, according to some, the tastiest.”

A crab without a shell is a tasty treat that you can fry and eat whole, legs and all. Their short season runs only from late April into May, most years, so Red Hog was lucky to get a ration, and I was lucky to grab a couple of the tiny, crunchy critters in a pair of their tacos ($18 for the pair).

They were good, very good. But now I must pause for an honest moment: They would have been better if we could have had them brought straight to our table in the restaurant.

Crisp, crunchy, sizzling-hot, fried things are at their best right now. We had to have ours packed into an attractive compostable box, popped in a bag, driven home, plated and eaten maybe a half-hour later. There’s no way to avoid this reality during a time of pandemic, but for future reference, it might be best to save crisp, golden-brown, fried goodies until we can dine in again.

Although they may have lacked the excitement of soft-shells in season, a pair of meatless frondosa mushroom and charred snow pea tacos ($6 for two) may have been an even greater culinary wowza. Large, chewy, meaty, chunks of pale-beige frondosas (hen-of-the-woods) really did taste like chicken. They were packed into the tacos with small, delicate snow peas with touches of grill char, crisp, small radishes sliced into thick, vertical chunks; creamy-tangy labneh (Middle Eastern-style yogurt cheese) and a dusting of fiery, red, North African-style harissa completed a mouth-jolting good combination of flavors and textures. A big win.

Also on the Taco Tuesday menu were Red Hog spicy chorizo tacos ($6) and “Duncan’s Famous” guacamole with blue corn chips ($10). And, of course, Red Hog has much of its extensive menu available for online or phone ordering and curbside pickup during the pandemic.

Our tab for lunch, swelled by the $18 soft-shell experience, came to $25.44, plus a $7.50 tip. Please don’t forget to break through the 20% tip barrier during these troubled times. It matters. And don’t forget to follow your favorite restaurants on Instagram. It’s one of the best ways to get a good look at what’s up… and early word on specials like soft-shell crabs.