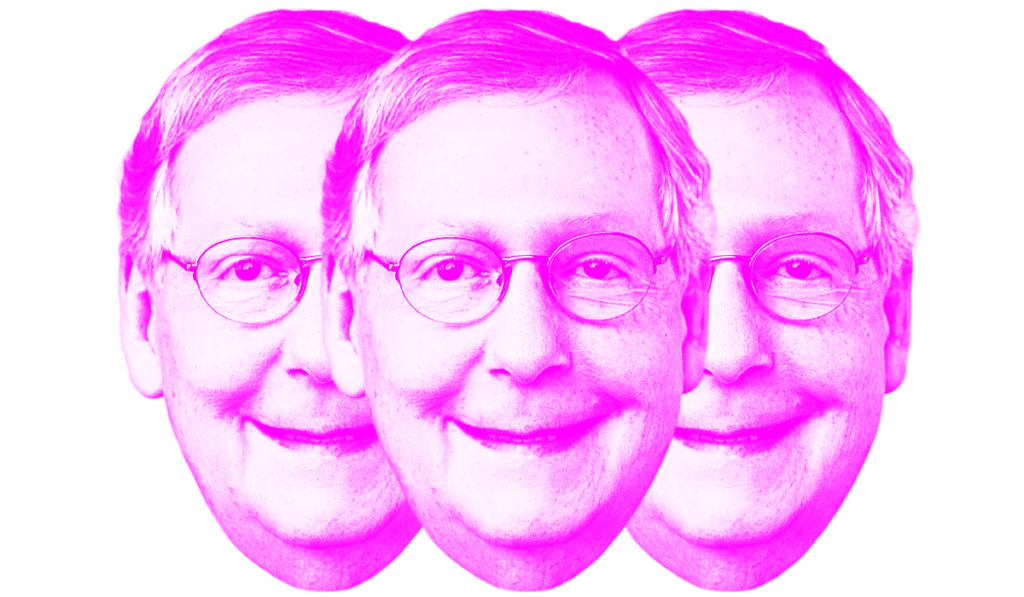 Republicans facing an election amid a once-in-a-century catastrophe made worse by their president are throwing anything they can against the political wall to see what sticks. Some of what they’re throwing is pretty slippery — trying to discredit experts, shifting the blame to China or, well, just making stuff up.

Senate Majority Leader Mitch McConnell had been a voice of reason, repeatedly volunteering in interviews that Americans should wear masks in public — a step urged by public health experts and governors of both parties but rejected by much of the political base of a president who has declared victory, left the field and refused to wear a mask.

McConnell’s been wearing one but has otherwise gone off the reservation, mainly in an online video interview Monday with Lara Trump, wife of presidential son Eric Trump. As they discussed the pandemic, McConnell averred, “Clearly the Obama administration did not leave for this administration any kind of game plan for something like this.”

That’s simply not true. President Donald Trump’s predecessor left him a 69-page playbook for a pandemic, including one caused by a novel coronavirus, with such points as the need for supplies of personal protective gear, and Trump largely disregarded it.

On Thursday, McConnell admitted he was wrong and that Obama had indeed left a plan for the Trump White House. “I clearly made a mistake in that regard,” McConnell told Bret Baier of Fox News. We’ve also learned that a big U.S. manufacturer of N95 respirator masks offered in January to ramp up domestic production because he was getting so many orders from other countries, and his offer wasn’t accepted.

At the same time, Health Secretary Alex Azar “struggled to get Trump’s attention to focus on the issues,” The Washington Post reported in a revealing timeline of the crisis. The only strong, early action Trump took was to ban most travelers from China, a move that still allowed 40,000 people to come from that country to the U.S., including 4,000 from Wuhan, epicenter of the pandemic.

To his credit, McConnell hasn’t, as far as I can tell, defended Trump’s overall handling of the crisis. But his acolytes, such as Attorney General Daniel Cameron, are trying to shift blame to China — which does need to be held accountable for how it handled the Wuhan outbreak but is largely beyond the reach of legal action that Cameron suggested.

McConnell talked about legal action in the interview with Lara Trump, to make what appears to have been his first public criticism of Democratic Gov. Andy Beshear’s handling of the pandemic. Asked about Democratic negotiating stances in Congress, he turned the conversation in another direction:

“If you look at the rhetoric, the Democrats seem to actually prefer keeping people locked up at home. That’s one of the reasons some of the governors have run into trouble. My governor in Kentucky, for example, has lost two cases in federal court because he overreached. He tried to have a travel ban in which you couldn’t leave or enter the state. … He tried to prevent people from having drive-in church services on Easter Sunday.”

Whoa again, senator. Beshear had to change his travel ban, but he didn’t try to prevent drive-in services; he actually encouraged them.

McConnell seems to have swallowed the claim of lawyers for Maryville Baptist Church in Hillview, that state police put quarantine notices on cars of people participating in the church’s drive-up service. Three judges on the 6th U.S. Circuit Court of Appeals did likewise, without proof; Beshear says state police told him they placed notices only on cars of people who had gone inside the church.

McConnell continued, “Some of these governors, particularly the Democrat governors, it seems, enjoy this extra power over people’s lives, and … the governors have been struck down, been overruled, for being sort of drunk with power at the opportunity to keep everybody locked up.”

That, sadly, echoed McConnell’s silly seatmate, Rand Paul. On May 7, U.S. Sen. Paul said Beshear was “drunk with power,” and on the following Tuesday he told the Owensboro Chamber of Commerce that the governor was a dictator.

That was the same day Paul went after Dr. Anthony Fauci, director of the National Institute of Allergy and Infectious Diseases, disputing basic public-health history and practice about avoiding resurgences in epidemics.

Paul is an ophthalmologist. He should have more respect for a colleague and for science. His jab at Fauci, and two by President Trump that followed, continued the sad trend among some Republicans of discounting scientific experts.

That’s understandable, if not acceptable, in politics. For example, on climate change, they dance with the fossil-fuel industries who helped buy their tickets to the dance. With a deadly pandemic, it’s not understandable, except to see them as singers of whatever tune Trump and his right-wing media choir sing in frantic efforts to get him re-elected.

McConnell and Trump are joined at the hip for the election, and the senator has been called the president’s chief enabler. Please don’t enable a pandemic. •