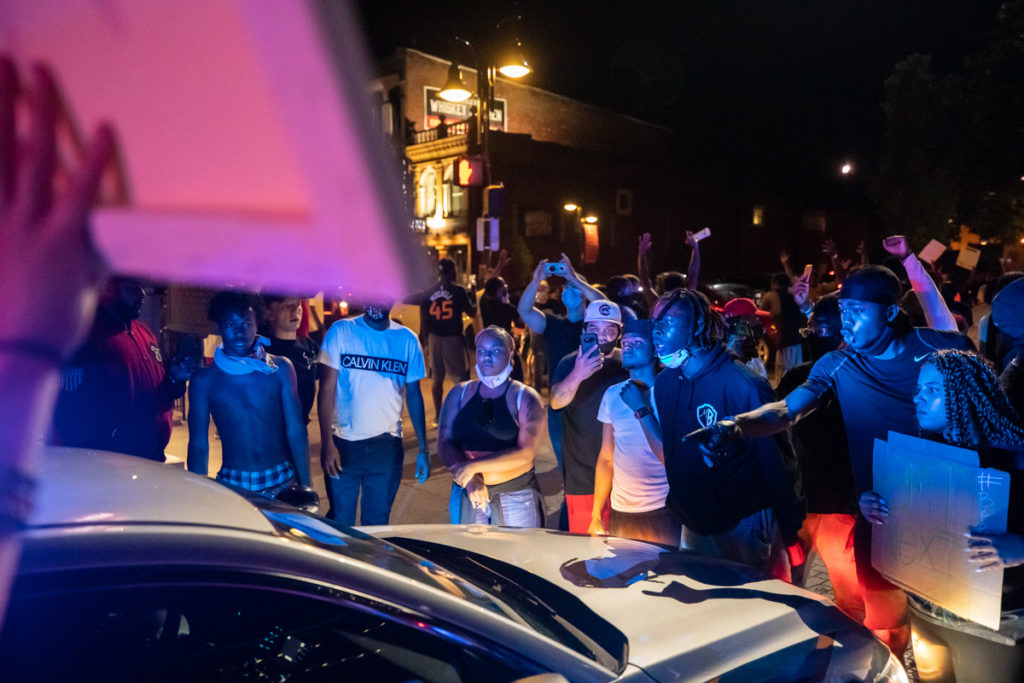 Protesters encountered police at the protest. | Photo by Kathryn Harrington.

NEAR SIXTH AND JEFFERSON STREETS — If there were an accurate zeitgeist of Thursday evening’s street protest, it was the stark contrast between the police, equipped with helmets and body armor and face shields and batons, gearing up for a night of ultraviolence as thick as the humidity and the peaceful protesters they were charged with dispersing. From beneath the lights of helicopters circling in the sky, this was their time to remind the protesters who actually runs Amerika, collectively fantasizing at the potential of the valiant lies of collective bravery and survival they could tell their future grandchildren.

The roughly 500 protesters — though the mass appeared to be closer to 1,000 — who had gathered in the radius of Sixth and Jefferson streets were seeking justice for Breonna Taylor, George Floyd and the countless other Black folks murdered by law enforcement. They gathered, peacefully at first, in the streets and just about anywhere else they could position themselves while offering prayers and chants of No Justice! No Peace! Many held bottles of water and gallons of milk in expectation of tear gas and pepper spray that would inevitably take place.

The smell of spray paint hung in the night air, a signal of the silent dissent painted on any surface that the protesters could hit.

One moment that should not be lost from the evening before Hell was unleashed from canisters was when the hand of King Louis XVI in front of Louisville Metro Hall was loosened from the statue as if he heard there was to be cake on the menu that evening.

Standing next to King Louis on the pedestal was a second king who was dressed in UofL basketball shorts and a mask and who was giving an impassioned speech while holding on to Louis’ hand for support.

As he spoke, “No justice, no peace!  Justice for Breonna!” came the crowd’s echo to his words, with great oratorical flex.

Then, suddenly, and without warning, the hand gave way.

One king’s body and the other king’s hand to fell to the ground with two solid thumps, one meaty, one marble.

The gathered mass gasped appropriately, and then there was silence, their fear of injury palpable as the phalanx of riot police readied themselves for the chance to press into the crowd and then shift the blame. But when the king in his shorts and mask stood, he hoisted Louis hand high above his head, and the gathered protesters laughed and cheered while passing it around like a cosmic beach ball at a festival.

One protester who preferred to remain unnamed relayed the moment he saw the hand disembodied from the deposed king. “I rolled,” he said with a sparkle in his eye. “I just couldn’t help but lose my shit.”

He also noted, holding his heavy-duty protective mask away from his face, “The cops put their eyes on me as soon as they saw me.”

His theory was soon tested.

The pigs in riot gear shuffled from one hoof to the other and snorted in anticipation, waiting for an excuse that could be passed off as a justification for violence when the first water bottle took flight toward them from the crowd.

“Don’t throw bottles,” the protesters roared in response, knowing such action was just enough of a tipping point in a land where violence is always coupled with protest.

Then, a few brave yet action-oriented members of the gathered began to rock the police van in defiance. Yet this attempt to flip the van and the thrown water bottles were not seen as the excuse the cops were looking for.

This was the point when gunfire erupted, which resulted in the seven injured. Police and Mayor Greg Fischer deny that the police fired their weapons but that the shots were from within the crowd. Said Fischer during a briefing Friday morning: “These shots came from within the crowd, not from police officers. No officers fired their weapons. If you hear anything to the contrary, that is not factual.”

Regardless, this was the moment that the wave of violence broke and rolled over the crowd, tear gas, smoke grenades and pepper pellets. A beer bottle or two made like doves in search of dry land. Chants of empowerment and justice turned to screams and running, running, running away into the night, blue lights left spinning in the aftermath, casting a shadow on all that it could touch.

Passing calls of “Stay safe!” echoed between directions to Run, Run! while bathed in the cloud of gas that swirled, punctuated with pops of gunfire.

I had an exchange of “stay safe” with a protester named Maria, while standing on the edge of Armageddon at Sixth Street.  She was on the phone with her mother and stated “I’ve been here for two hours,” between pauses of her mother in her ear. Her eyes darted back and forth, desperately searching, assuring her mother that she would leave as soon as she found her friend.

“Stay safe,” I told her, eyes and lungs burning as a stark reminder that justice and peace are nowhere to be seen on the darkened horizon.

Then, the skies opened and brought the rain that the humidity signaled was on its way for hours, causing the crowd to disperse.

This was not the end of the discussion, only a pause in the aftermath of the rains the Almighty brought as a means of baptizing the saints with burning lungs and washing the sins of the evening from the starless evening sky.

Heidi Taylor is a newly-minted graduate of the Spalding Skool of Professional and Creative Writing. #JusticeForBreonna #JusticeForGeorge #ByAnyMeansNecessary