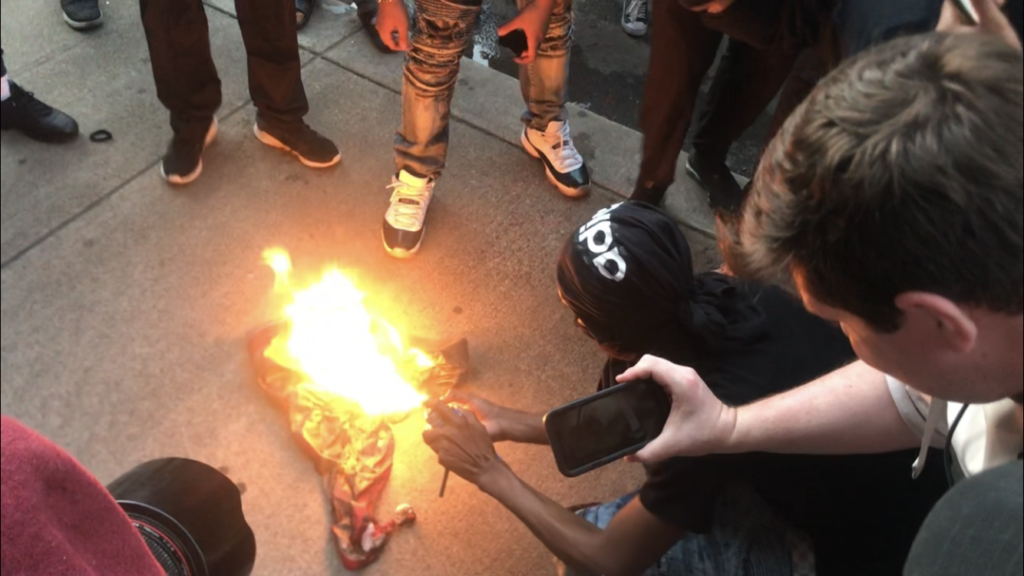 A protester burns a flag downtown. | Photo by Danielle Grady.

Protesters in Louisville say they don’t want vandalism to be the headline, but it has become one.

For a second night, street protests in Louisville turned to vandalism as police moved in Friday evening with tear gas and pepper pellets aimed at an estimated 1,000 protesters.

Louisville police, Mayor Greg Fischer and Gov. Andy Beshear contend the property damage done late Friday night was caused by people from outside of the city.

But protesters told LEO that they are frustrated over the growing criticism of vandalism and focus on it, because that diverts the public’s attention from the point of the protest — to end police brutality against Black and brown people and get justice in the most recent incidents, including the police killing of Breonna Taylor.

As in any political or social movement, there is not always consensus, as was the case among protesters Friday who debated the value and effect of vandalism on their causes. That division was evident when demonstrators lowered the Louisville, Kentucky and American flags from poles in front of Metro Hall and set them on fire to chants of “burn them all!”

One nearby protester shook with excitement.

“Fuck this country,” she said with a giggle. “That was my brother that brought this flag down. That was the symbolism that all the fucking oppression they have is coming the fuck down.”

Less than 6 feet away, another protester scoffed at the scene.

“I don’t give a shit about a flag. What I give a shit about is people want to be aggressive, and there’s not really a need to be it,” she said. “I don’t think it’s really fair. I feel like last night was a lot more powerful and passionate. Tonight, it’s just about people trying to cause a problem.”

One protester LEO spoke with said that she wanted a peaceful demonstration, but she doesn’t want the destructive actions of some to be the focus.

“The issue is what’s going on with the police officers,” said Louisville resident Tiffany Hines as she stood at the downtown intersection of Jefferson and Sixth street at Friday night’s protest before the vandalism began. “It’s not the fact that they broke into Target. That’s the stupid stuff, you know.”

The Target that Hines spoke of, which was looted in Minneapolis, Minnesota, has become a national symbol for those critics of vandalism.

What Hines really cares about and wants is justice for Breonna Taylor, the Louisville ER tech who was shot and killed in her home by Louisville police officers in March. To Hines, who is 38, justice would be seeing the officers involved in her shooting arrested and charged.

But, on Saturday morning, after the protests, Fischer said that the protesters’ goals would not be achieved by damaging property, which escalated on Friday from vandalism to looted stores.

“Violence does not bring our city closer to the truth in her case,” he said. “No one stands up for justice and equality by smashing windows and burning property. This destruction will not be tolerated.”

Fischer said the city will enforce a dusk-to-dawn curfew at least for the next two days. Six people were arrested Friday night, “some because of looting,” and six officers were injured, the mayor said.

Beshear, in a statement released Saturday morning, said he is activating the National Guard to help keep peace in Louisville.

“The demonstrations in Louisville have all started peacefully, but what we have seen, especially last night, and what our intelligence says is going to happen are outside groups moving in, trying to create violence to harm everybody who is on those streets. We cannot let Breonna’s legacy be marred by violence, and we can’t let our streets turn violent,” Beshear said.

On Thursday night, the first evening of mass protests in downtown Louisville, the demonstrations were mostly peaceful. It wasn’t until later in the evening, after the sun had gone down, that protesters began throwing objects at police officers and officers began using tear gas and pepper balls on protesters. Later, as some demonstrators rocked a police transport vehicle, seven citizens were shot. Louisville police say that the bullets came from the crowd. Throughout the night, there was destruction of property including graffiti, burning picnic tables and rocks thrown at city vehicles and into the windows of businesses. Fischer said on Friday morning that the damage to city property was likely not hugely expensive. Friday evening, the vandalism started a few hours into a peaceful protest and was once again met by tear gas and pepper bullets.

Sonja de Vries, a longtime activist in Louisville and a member of Louisville Showing Up For Racial Justice, said that Fischer’s comments try to shift the focus away from what she sees as the most important problems.

“The issue is white supremacy, racism, police abuse, mass incarceration. Those are the issues,” she said. “And we can’t let them sidetrack us into talking about how people should protest. And you know what, the people in power don’t get to decide how people can protest.”

Louisville protesters LEO spoke to almost all said that they wanted peaceful protests on Friday. But they also said they could understand why others might take their anger out on city walls and windows.

“I think it’s a deep sense of injustice, a deep sense of alienation, and also not being the owners of anything, including people’s own bodies,” said de Vries. “The idea that someone could be asleep in their bed and have the police break down their door and destroy them. It’s as if they don’t even own their own body.”

And a few said that the property being destroyed could easily be taken care of.

“I mean, let’s be honest, properties have insurance claims for damages, so the properties are not going to suffer that much, realistically, with insurance companies doing what they do,” said Andre Locker, 44.

Locker called the mayor’s comments a “cop-out,” adding that if people are being treated right by a system, they won’t destroy that system’s infrastructure.

Online complaints about vandalism at protests has been met with pushback, saying that property destruction does not delegitimize unrest.

A Facebook post from a sympathetic restaurant owner in Minneapolis has also been circulated widely. Gandhi Mahal Restaurant burned down during morning protests on Friday, but its owner Ruhel Islam has been quoted as saying, “Let the buildings burn. Justice needs to be served. Put those officers in jail.”

Some Louisville’s protesters were unsure Friday whether extreme protests could help achieve their goals.

Hines said that conducting a peaceful protest is important because it would prevent detractors from diminishing protesters’ concerns.

“You have to have peace so you can be heard,” she said, “because if not, the president will tweet dumb things like he did, instead of looking at the real issue.”

But, after Thursday’s protest, with its singed picnic tables and defensive officers, Fischer announced that no-knock warrants would be temporarily suspended in Louisville, one of the protesters’ demands.

De Vries said, “Change has always happened because people did get out in the streets as one of the strategies. Because people in power have never just decided out of the goodness of their hearts that they’re going to make those changes. It’s always come about because of grassroots movements, pressuring on many levels.”