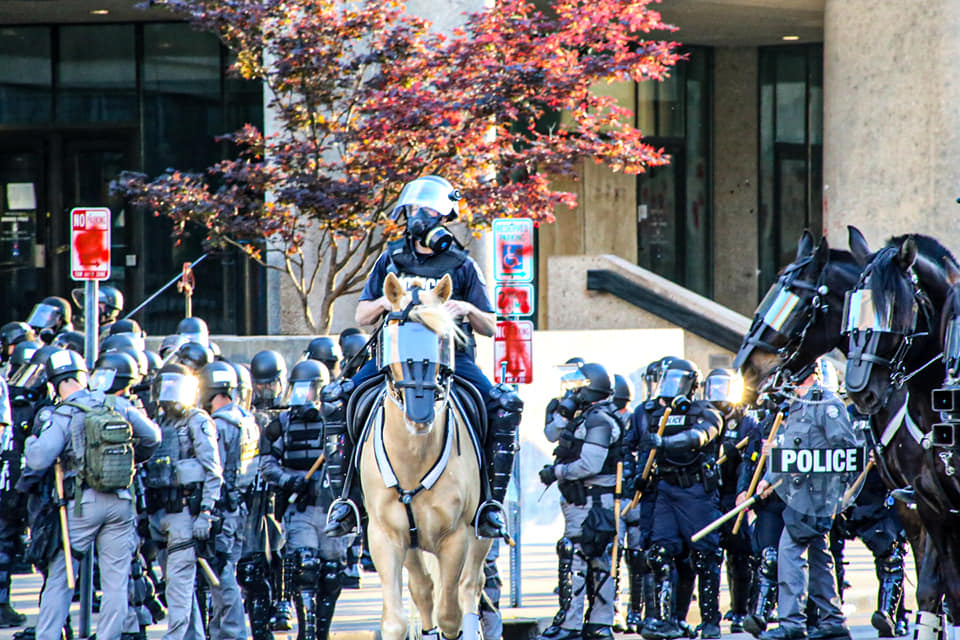 Police were on horses at the Hall of Justice downtown. | Photo by Eric Morris.

Less than an hour and a half before curfew on Saturday night, a Louisville protester was skeptical of the 9 p.m. curfew rule the city enacted to stem the vandalism and looting that occurred downtown Saturday evening.

“I don’t know,” he said. “Is he [the officer who shot Breonna Taylor] going to get indicted at 9 fucking o’clock tonight?”

On Saturday police corralled protesters downtown into pockets, which made the number difficult to estimate. It seemed to be fewer than the estimated 1,000 Saturday night, possibly closer to the 500 the night before. By 10:30 p.m., when Mayor Greg Fischer gave a press conference, they were mostly dispersed from the various pockets where police had pushed them downtown. And a second group of protesters, on Bardstown Road, had dwindled after midnight, although some took to their cars to drive downtown and through The Highlands.

Even before the curfew began, police downtown had used tear gas and flash grenades for the third night. By the end, at least 33 people had been arrested, WFPL reported.

Ostensibly, the protesters were rallying against historical, endemic police brutality against Black people. In Louisville, the main focus was on getting justice for 26-year-old Breonna Taylor, an ER tech who was shot to death in her home after police entered in the early morning with a no-knock warrant. They suspected a drug dealer had delivered a package there. No drugs were found, and the suspected dealer had already been arrested elsewhere.

Gov. Andy Beshear had activated about 350 National Guard to aid Louisville police in an attempt to cut down on property damage and looting that occurred during Friday night’s protests, which he, Fischer and police have blamed on people from out of town.

Fischer claimed that there were people in the crowd asking for directions to “common places that Louisvillians would know about.” Authorities have not offered additional evidence that what Fischer called “anarchists” were involved.

The out-of-town influence has become a common refrain. President Trump tweeted: “80% of the RIOTERS in Minneapolis last night were from OUT OF STATE. They are harming businesses (especially African American small businesses), homes, and the community of good, hardworking Minneapolis residents who want peace, equality, and to provide for their families.” And: “It’s ANTIFA and the Radical Left. Don’t lay the blame on others!”

Protesters LEO spoke to on Saturday were mixed on whether they thought out-of-town protesters were to blame for the previous evening’s vandalism.

“All the people that were smashing windows, and I have a feeling, looting all the shit last night, I feel like a lot of them were from out of town,” said one person downtown who didn’t give his name but said he lived in the Hikes Point neighborhood.

He was not at Friday night’s protests, he said, but he thought that the demonstrators in The Highlands must have been locals because they did not vandalize the Bardstown Road businesses and “everybody here loves The Highlands.”

Rebecca Hall, 35, also from Hikes Point, said she didn’t know whether there were out of town protesters, but she pointed out that mayors across the country have said  the same thing as Fischer.

“Even if there are people here that are joining others to protest, I don’t understand why that’s an issue or why that’s even being brought up,” she said. “I feel like rather than accept that there is this many people in the city angry about what’s happening they want to make it seem like this isn’t us that’s angry and this is why this is happening.”

“There are widespread reports and video evidence of Louisville Metro Police and supporting law enforcement agencies repeatedly attacking protesters and press without cause last night in Louisville. Mayor Fischer’s apology this morning and LMPD’s characterization of the incidents as ‘confusion’ last night are not sufficient to address the shocking, unjustified use of force against peaceful protesters and the specific targeting of journalists. Law enforcement’s violent actions last night and the lack of any meaningful accountability for those actions so far today are at the core of why thousands of people have taken to the streets to demand justice for Breonna Taylor and others. Officers swear an oath to serve and protect. Firing tear gas at peaceful protesters before curfew and threatening journalists with arrest falls far short of your responsibilities to the community. We call for the immediate end of the discriminatory, disproportionate application of force and the swift sunset of the broad curfew order.”

Earlier in the day Saturday, Beshear called for calm.

Fischer said that Saturday’s crowds were “significantly smaller” and easier to manage than on Friday when looting and vandalism tore through the downtown.

“I want to say thank you to those who peacefully demonstrated today and respected the need for the curfew,” he said. “You’ve helped your city.”

But protesters weren’t happy with the city’s extra measures. Hall found them unfair.

“I think being so quick to suppress the protest and the anger is sending the wrong message,” she said. “We’re supposed to just accept that change is going to come. And you know, I think, you can mobilize to protect property so quickly, why can’t you mobilize that quickly to protect Black and brown lives?”

But, she said she would leave if the situation got dangerous.

Another woman at the protests, who had to run away from advancing police before she gave her name, said she understood the mayor’s decision, but that she, too, wanted him to focus on the protesters’ concerns.

And Sonya Burton, 43, who traveled from the Fort Knox area to protest, said she thought the mayor’s idea was a good one to prevent evening riots.

While the sun was still up, two plainclothes police officers destroyed milk and water that protesters had stockpiled in the event of tear gas. Fischer later said that the supplies contained materials that would have been harmful to other protesters, including mason jars with flammable materials.