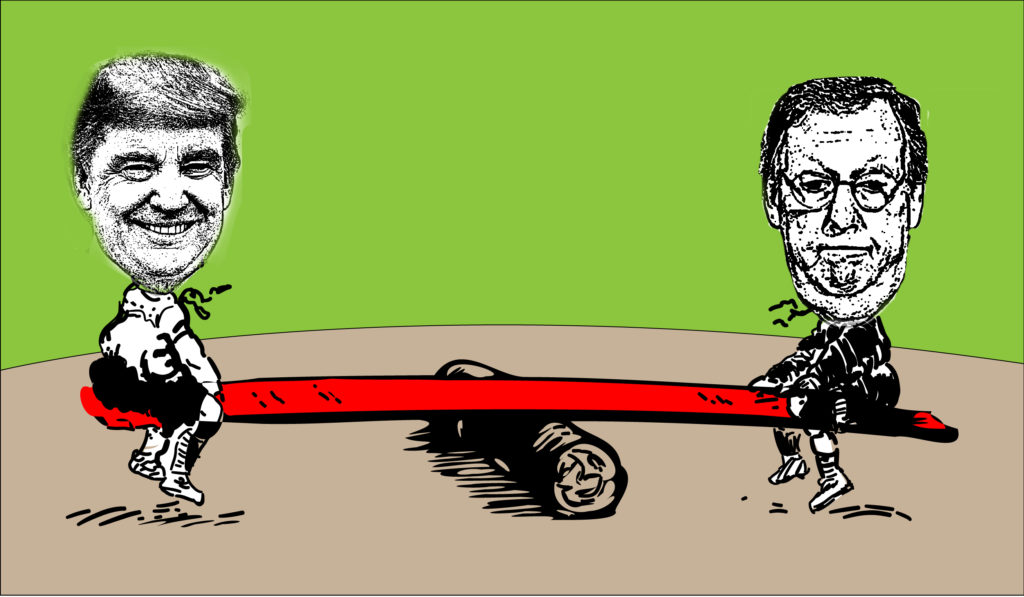 When U.S. Sen. Mitch McConnell recently suggested he was resistant to providing federal money to states to make up for their coronavirus-related budget shortfalls, he was widely criticized, even from some Republican officials. And McConnell was also taking a position that is potentially detrimental to his chances of winning reelection in November. Leaders in both urban and rural areas in  Kentucky are desperate for money and seem likely to make big cutbacks in public employees and services without some federal help. While we don’t have polling among Kentucky residents, a recent Morning Consult/Politico survey showed that 74% of voters nationally, including 65% of Republicans, want the federal government to offer more aid to states amid the COVID-19 outbreak. Based on those national numbers, I would assume at least a majority of Kentuckians share that view.

And that’s not the only controversial position the senator is taking amid the virus outbreak.

He is pushing for legislation that would make it harder for workers to file lawsuits against their companies if they get COVID-19 at work and feel their employers did not do enough to create a safe work environment. The Senate majority leader also successfully pushed for senators to return to Washington this week for in-person sessions,  despite concerns from at least one senator that this approach is unsafe and that McConnell should consider allowing some members to vote remotely. It’s expected that the Senate won’t focus on just COVID-19 and the mass unemployment that has resulted from it but also federal judicial appointments, including putting a McConnell favorite, Louisville-native Justin Walker, on the powerful federal appeals court that oversees Washington, D.C. and the federal government. Walker was described as unqualified by the American Bar Association because of his lack of trial experience before he was appointed in October to a judgeship for the federal district that includes Louisville. The potential for Walker moving to an even more powerful post so quickly has angered Democrats.

So, what exactly is Mitch McConnell up to?

Basically the same things he has been throughout Trump’s presidency, if not before. Mitch McConnell has a close alliance with the business community and conservative-leaning wealthy people and a pro-business approach that shapes his governing and electoral strategies. And while everyone and everything else seems to be changing amid COVID-19, McConnell is staying on that course.

On Capitol Hill, McConnell has been a key figure in pushing through a series of massive spending bills in response to the COVID-19 outbreak and its effects, with a total cost of around $2.7 trillion. He has backed off from his initial strong opposition to giving states federal dollars.

Republicans often cast themselves as the small-government party, in opposition to increased spending or expansions of federal power. But that’s not really true of the party in general — and McConnell in particular. He was supportive of then-President’s Bush No Child Left Behind Act, which substantially increased the federal government’s role in American education, and another Bush initiative that expanded government, adding a prescription drug benefit to Medicare.

McConnell has now been one of the leading figures in the passage of two, huge bipartisan federal efforts to pump money into businesses and corporations to prevent the collapse of the financial markets and potentially the American economy(the 2008 bailout and the provisions passed amid COVID-19).

So, McConnell isn’t someone who is anti-government or anti-spending — at all.

But what links many of his policy decisions is a pro-business approach. Along with those bills to prevent market collapse, McConnell was an architect of a major tax bill adopted in 2017 that included a huge corporate tax cut, as well as the repeal of numerous regulations on businesses that were adopted by President Obama. The Kentucky senator has been very focused on pushing Trump to nominate more federal judges and then getting them through the Senate. Those nominees, such as Walker, are conservative on a wide spectrum of issues, and, in particular, they are expected to strike down government regulations on businesses.

Trump is a businessman — so it’s not as if he needed McConnell to talk him into adopting pro-business policies. That said, it’s worth thinking carefully about the dynamic between the two Republican leaders. Many critics of the Kentucky senator suggest that McConnell, who had a somewhat tense relationship with the president in 2017, has simply surrendered to the president’s authority because Trump is so popular among Republican voters, particularly in Kentucky. (Fifty-four percent of Kentuckians and 88% of the state’s Republican voters had a favorable view of Trump, according to a survey conducted last November. In contrast, only 45% of Kentuckians overall and 74% of the state’s Republicans viewed McConnell favorably.)

But is their dynamic really the other way around — namely that Trump has bent to McConnell’s will?

During his 2016 campaign, Trump ran as an economic populist, taking stands such as  opposing cuts to Medicaid and  proposing a $1 trillion plan to improve America’s infrastructure. In office, Trump has abandoned much of his economic populism and focused on an agenda of cutting taxes, reducing regulations on businesses, appointing conservative judges and other things that a President Jeb Bush or Ted Cruz would have done. What if McConnell supports Trump so much, in part, because the president is implementing a McConnell style-agenda so completely that it’s as if the Kentucky senator effectively got to become president without running for the office?

Trump can’t admit this publicly (and look weak) but one of the reasons his more populist plans never move in Congress is because McConnell isn’t that supportive of them and never really tries to push them through.

“Their refusal to devote resources to anything but tax cuts and the military turned “Infrastructure Week” from a popular Trump promise into a punchline,” political scientists Jacob Hacker and Paul Pierson write in their soon-to-released book “Let Them Eat Tweets,” referring to McConnell and then-House Speaker Paul Ryan’s leadership of Congress in 2017-18. “Another of Trump’s pledges–to not cut Medicaid–did not stop Ryan and McConnell from trying to do just that.”

So, in terms of COVID-19, I expect McConnell to push any new legislation in a pro-business way — and succeed, in part, because Trump will get on board. McConnell will likely agree to federal aid to cities and states–perhaps even hundreds of billions  of dollars. But he will fight really hard for any such provision to include some liability protections for businesses amid COVID-19. He will frame aid to states as a Democratic demand and liability for businesses as GOP demand–and push for some kind of compromise that includes both in a final bill. Trump will likely sign such a bill and pretend it was his initiative — even if McConnell was the key driver.

You might think all of this is a bad electoral strategy for McConnell. After all, there are more voters in America and Kentucky who are employees than business owners. Bailing out states is very popular, as I noted earlier. It’s not clear rank-and-file voters care that much about judicial appointments outside of the Supreme Court. Also, McConnell is the second-most unpopular senator in America, according to Morning Consult, so anything he does that isn’t popular would seem risky, with his reelection looming.

Sure, McConnell might lose this fall to Democrat Amy McGrath, who is running a strong campaign, at least in terms of fundraising. But I wouldn’t expect that. The big obvious reasons are that Kentucky leans toward Republicans and Trump is fairly popular here, so those broader dynamics will boost the senator, even if the state’s voters don’t particularly love him.

But McConnell also has a good chance of winning because his business-friendly strategy has some electoral benefits. Republicans like McConnell have an informal playbook: 1. They adopt pro-business policies on Capitol Hill2. wealthy conservative activists and businesses give tens of millions of dollars to Republican super  PACs and other election apparatuses, in part to reward Republican lawmakers for passing those policies and 3. Republican candidates spend that money on campaign commercials that emphasize those pro-business policies, but also issues like abortion and gun rights, since many voters, particularly in states like Kentucky, have some discomfort with the cultural liberalism of the Democratic Party.

The path to a McConnell’s victory in November is likely not that the senator will become super popular with Kentuckians. Instead, it’s more likely that in the summer and the fall he will attack McGrath as too supportive of abortion, immigration and a Democratic Party that includes self-proclaimed democratic socialists like Rep. Alexandria Ocasio-Cortez of New York and Sen. Bernie Sanders of Vermont, while arguing that McGrath is insufficiently supportive of gun rights and Trump. And that effort to attack McGrath likely will be very, very well-funded, driving down McGrath’s favorability ratings and convincing voters that McConnell is essentially the lesser of two evils.

That’s how McConnell’s decisions on COVID-19 and throughout Trump’s presidency dovetail with a potentially-successful reelection strategy. I am not guaranteeing this will work — or that it’s necessarily the best strategy either for implementing a business-friendly agenda or ensuring that you are reelected. But at last right now, this approach has left McConnell with a ton of power in shaping America’s legislation and judiciary — and with a decent chance of winning another six-year term and either maintaining that power or getting even more.

Perry Bacon Jr. is a national political writer based in Louisville. You can reach him at [email protected]