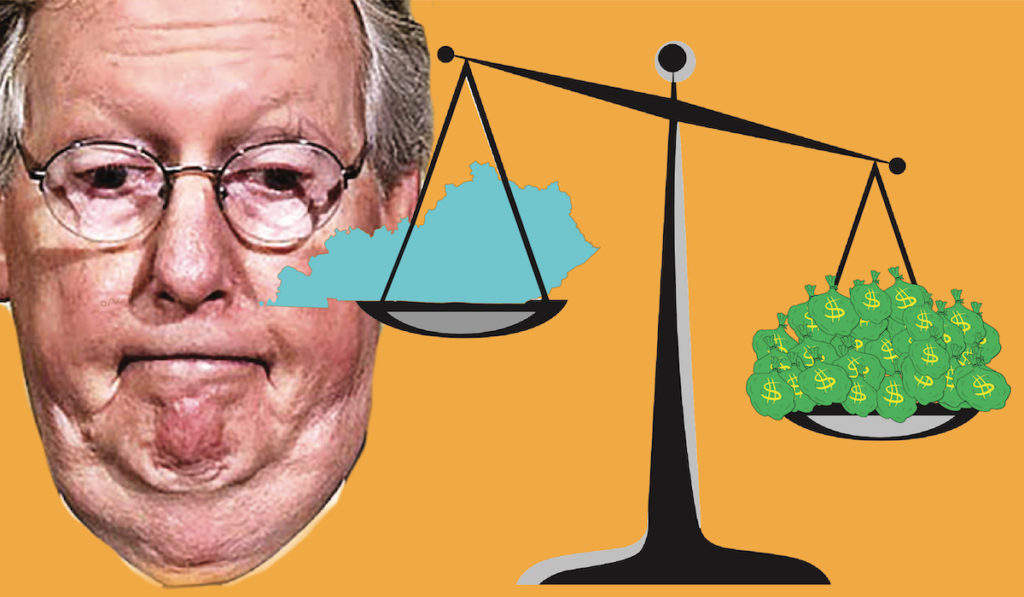 The timing of the email from U.S. Sen. Mitch McConnell’s office was just too perfect for it to not seem like an intentional attack on Gov. Andy, designed to make him appear weak and ineffective.

It also underscored how our senior senator cares more about Big Business than his own state and is just as wedded to the quid pro quo as is Donald Trump.

Last week ended with withering criticism of McConnell in Kentucky and elsewhere for his assertion that states should file for bankruptcy rather than expect federal aid as they collapse under coronavirus-maimed budgets.

He then appeared to soften his view.

“There’s no question all governors, regardless of party, would like to have more money, I’m open to discussing that,” McConnell said on Fox News Radio.

It did not come too soon, as Kentucky announced Thursday that it faced as much as a $500 million shortfall.

Later that day, during the Sip Along with Gov. Andy Briefing, we all expected the governor to address the new projections for Kentucky’s Budget Blow Up and McConnell’s plan to deny his own state help.

At about 5:30 p.m., Gov. Andy seemed to offer hope — he said he had talked with McConnell about the need for federal aid.

Of course, he had!

After all, Gov. Andy is one of McConnell’s constituents and should have a direct line to him, no? The senator likes to compare himself to the Grim Reaper when it comes to Democrat proposals…but, certainly, he must want to help Kentucky, even if it were not an election year for him.

“This is not a political issue, even though it appears there is back and forth between parties in D.C. All state and local governments, I believe, are united. We have to do this if we are going to do what it takes to rebuild our economy. So I hope you will add your voice to your U.S. representative or senator. Make sure you are heard,” he said.

As Gov. Andy explained, he said he was appreciative that the powerful senator had listened to him.

“I had a conversation with our Sen. McConnell, the majority leader, today where I was able to express this need and talk over some of the numbers. I appreciate him hearing me out, and now I hope he will be able to act in this next CARES Act to make sure that the type of relief that is needed is provided, just like I pushed to make sure that relief is out there for our citizens, for our businesses and others has been provided.”

It was a bad sign that Gov. Andy left out what McConnell had told him during the conversation. “Appreciate” is one of those powerful HR words that managers use when they don’t want to make a commitment regarding an employee’s request. As in: “I appreciate what you are saying.”

So, had McConnell offered any hope or made any promises?

At about 6 p.m., Gov. Andy answered the question: “He said he understood, but there were more discussions going on in Washington, D.C. But he heard me out. He understands the request. He understands why I believe it is so important. The numbers are the numbers.”

McConnell’s office has to know that Gov. Andy puts on his show every day between 5 p.m. and 6 p.m.-ish. So, at about the same time he was explaining McConnell’s non-commitment, the senator’s office sent out an email blast with excerpts from his appearance that day on a Fox (fake) News show and a link to the full interview.

The excerpt conveniently left out the part about “bankruptcy,” but here is the full quote.

“What I said is we have already provided $150 billion in previous bills in the past month to six weeks to send to local government. Bankruptcy is obviously a decision, if it were legal, (that) would be made at the state level. I don’t think many states would choose that option,” he said. “The point is we are not interested in borrowing money from future generations to send down to states to help them with bad decisions they’ve made in the past unrelated to the coronavirus epidemic. We are more than happy, and already have, sent $150 billion down to states and localities to deal with the pandemic.”

Here is the quid pro quo.

“I think any additional assistance that we provide for state and local government also needs to include some things that are important for everybody else. That is the doctors, the nurses, the hospitals, the brave businesses that will be reopening concerned about an epidemic of lawsuits that will be brought by the plaintiff all over America in the wake of this pandemic. So, we don’t need an epidemic of lawsuits in the wake of the pandemic,” McConnell said. “So if we do another rescue package, and we may, we need to take our time and do it right, and it needs to include these liability protections so that all these brave workers and brave businesses that will be reopening are not subjected to the second epidemic of litigation.”

Republicans hate lawsuits, because lawsuits let victims find recompense for harm caused by the more powerful, such as bad doctors and bad corporations.

How many times in Kentucky have Republican lawmakers pushed for what they call tort reform?

One of the last efforts was signed into law by Gov.-reject Matt Bevin and had been proposed by his future running mate, Sen. Ralph Alvarado, a Winchester Republican and nursing home physician. It established medical review panels with the goal of weeding out bad malpractice lawsuits. Isn’t that what a trial is supposed to do? Fortunately, a judge voided the law saying: “The effect of the medical review panel process is not the reduction of frivolous negligence claims, but rather, the erection of barriers to the court system.”

Now, McConnell is telling congressional Democrats that if they want to do the right thing — that is help out ailing states — then they need to guarantee that Big Business can do whatever it wants without fear of being sued.

House Speaker Nancy Pelosi was having none that nonsense:

“Especially now, we have every reason to protect our workers and our patients in all of this. So we would not be inclined to be supporting any immunity from liability,” Pelosi told reporters at a news conference.

It sounds like it will be a messy fight.

Gov. Andy said he knows this and wants no part: “I don’t want to be in the middle of a Washington, D.C. negotiation or debate. That is not a place I don’t think many people want to be. But I certainly hope it is going to move forward and happen.”

We are certain McConnell can appreciate that.