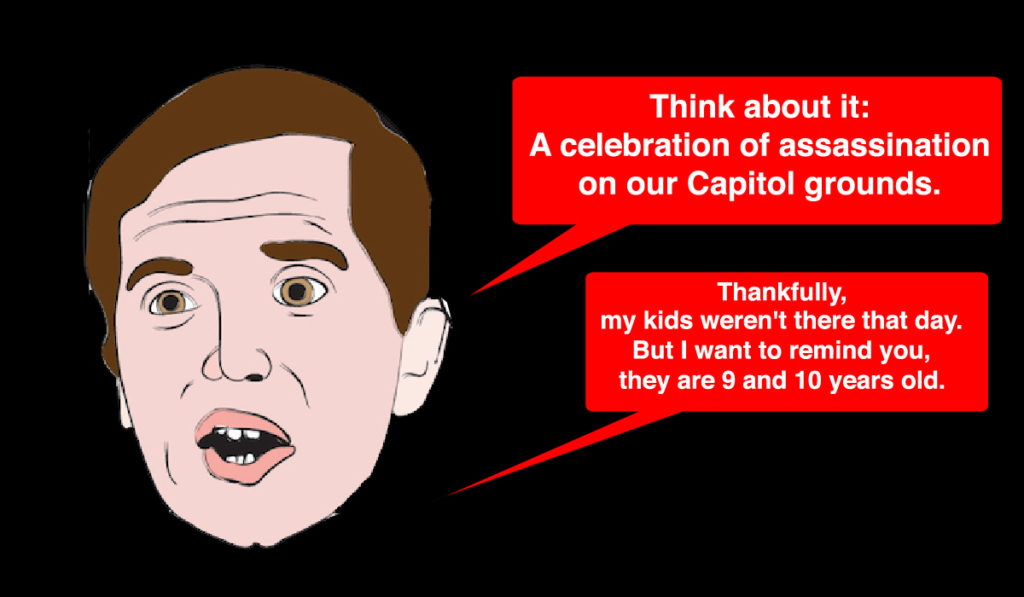 Armed protesters marched on Gov. Andy Beshear’s home Sunday and hanged him in effigy, using the words of President Lincoln’s assassin, all because he wants people to wear masks so they don’t join the 100,000 dead from COVID-19.

Did he deserve that?

Did Breonna Taylor deserve to be shot to death by police in her home because they thought a suspected drug dealer had delivered a package to her house (no drugs were found)?

The answer to both, obviously, is: No.

We can ask the same questions about George Floyd, Ahmaud Arbery and Christian Cooper.

Did any of these people deserve being killed or threatened?

So, who is responsible for making these people feel so entitled, emboldened and justified that they can kill and threaten innocent Black men and also march on the Governor’s Mansion with no recourse?

Either directly or by being complicit.

Either by standing to the side silently while this shit happens or by electing the same people who say “I think there is blame on both sides,” who declined to condemn such ignominy, who refuse to fire police chiefs and officers and those who participate in rallies with armed, white supremacist militias.

Those to blame include Donald Trump, who infamously told a New York crowd in 2017 that is was OK to injure suspects during arrests.

Kentucky’s senior senator, Mitch McConnell, who enables Trump and could not find enough backbone to rebuke him for saying there were “were very fine people on both sides” and “I think there is blame on both sides,” after the Charlottesville “white power,” anti-Semitic rally.

And Mayor Greg Fischer, who allowed the chief of police to run a chaotic, dangerous department for years, fraught with child sex scandal, overtime abuses, a huge lawsuit settlement with no consequence for officers, a record homicide rate and now the death of Breonna Taylor.

There are more, many more like them who felt it was just fine to fire up gun-toting protesters outside of the Governor’s Mansion, where the governor lives with his wife and two children.

On Tuesday, the always measured, moderate and modest Beshear declined to call out those elected officials he thinks emboldened and provoked the armed men who had hanged him in effigy and marched to his doorstep to deliver a demand that he resign.

State Rep. Savannah Maddox, the Dry Ridge Republican who posed at a May 2 rally in Frankfort with an armed woman and then denied she knew the woman’s hand sign signaled “white pride.”

State Rep. Stan Lee, the porn-stached Republican (who shares a name unfortunately with Spider-Man’s late progenitor). He was at that rally, too, when he decried the overtly religious and spiritual Beshear as a “hypocrite” for allowing an abortion clinic but not churches to remain open.

On Saturday, a day before the practice lynching of Beshear, the “Freedom Rally” converged on Frankfort to protest his efforts to slow the virus’ spread.

Those who spoke at the rally included Jim Waters, CEO of Bluegrass Institute for Public Policy Solutions, who wrote in the Courier Journal “Was Jesus a ‘Super Socialist’ Would he favor a destructive ideology?”

And Wesley Morgan, who lost his seat in the state House in a Republican primary and said he would vote for the Democrat in that race because “tonight, the GOP lost a true conservative and patriot.”

“I believe this entire pandemic was orchestrated to destroy President Trump’s economy and to keep people from voting these political tyrants out of office,” Morgan told the crowd, The CJ reported. “I believe it’s all about the election.”

That brings us the next day, Sunday, when the Patriot Day 2nd Amendment Rally crescendoed with what some will call an exercise of the First Amendment but others will see as wanton and naked threats of violence.

Here is how Beshear said he saw it.

“I’ve written down some of my thoughts, how I feel,” he said Tuesday during his daily briefing. “I have tried to be vulnerable and direct in these press conferences, so I want to make sure I was today as well,” he said, explaining why he moved to the Governor’s Mansion. “We have become the first family to live in the Governor’s Mansion full time in over 30 years.”

He thought having Kentucky’s first family there would unify Kentuckians. “One thing I never thought about, never questioned, was their personal safety,” he said. “I did not consider they would be bullied or heckled by grown adults.”

“And then Sunday happened.”

The Three Percenters walked through the barriesr that separated them from the Governor’s Mansion. “They walked up and stood on the front porch, just a windowpane away from where my kids play. The mob chanted and heckled. Thankfully, my kids weren’t there that day. I want to remind you they are 9 and 10 years old.”

“Unsatisfied, the mob retreated to an area several hundred yards away and hung a dummy with my face on it. It included the saying used by Lincoln’s assassin. Think about it — a celebration of assassination on our capital grounds.

“So, let’s start by calling it what it was, and what it is — actions aimed at creating fear and terror. Crossing over barriers, standing on the other side of the glass from where I raise my kids and hanging me in effigy? That’s an action intended to use fear to get their way. This small group, way less than 3%, is trying to bully everyone else into doing what they want us to do. But, they didn’t get there alone.

“They had been embraced and emboldened by elected leaders that rallied with them weeks before. Standing in front of a radical militia group, these elected officials claimed that people, including me, aren’t Christian, and even told them that people wanted babies to be murdered.

“What do you think was going to happen after throwing out those type of claims to this group? Shouldn’t they have known what was going to happen? You cannot fan the flames and then condemn the fire. Those elected officials that embraced these individuals, and that stood in front of people dressed in tactical gear and the rest and threw as much red meat as possible at them, they have to claim responsibility because they absolutely know what could have happened. And, they are, in part, responsible for what did happen.

“All elected officials can no longer actively seek the support and cater to these groups like we have seen. Right is right and wrong is wrong. You can’t wait until something nasty and horrible happens to then claim it’s wrong, while you’ve then catered to the support of certain groups, for votes or other reasons.”

Beshear said he will not be “bullied.”

“My faith, the same faith that some of those elected officials and that mob attacked — it tells me that doing the right thing is supposed to be hard,” he said. “I can’t act like those who try to take me off course, and those who try to bully all of our families. I will not be afraid. I will continue to do the right thing, and we will get through this together.”

It is important to remember, only 100 or so people attended each of those rallies.

Yet, out of all governors, Beshear has received the highest approval rating (81%) next to Ohio’s governor (83%) for their handling of the epidemic.

Because he deserves it.