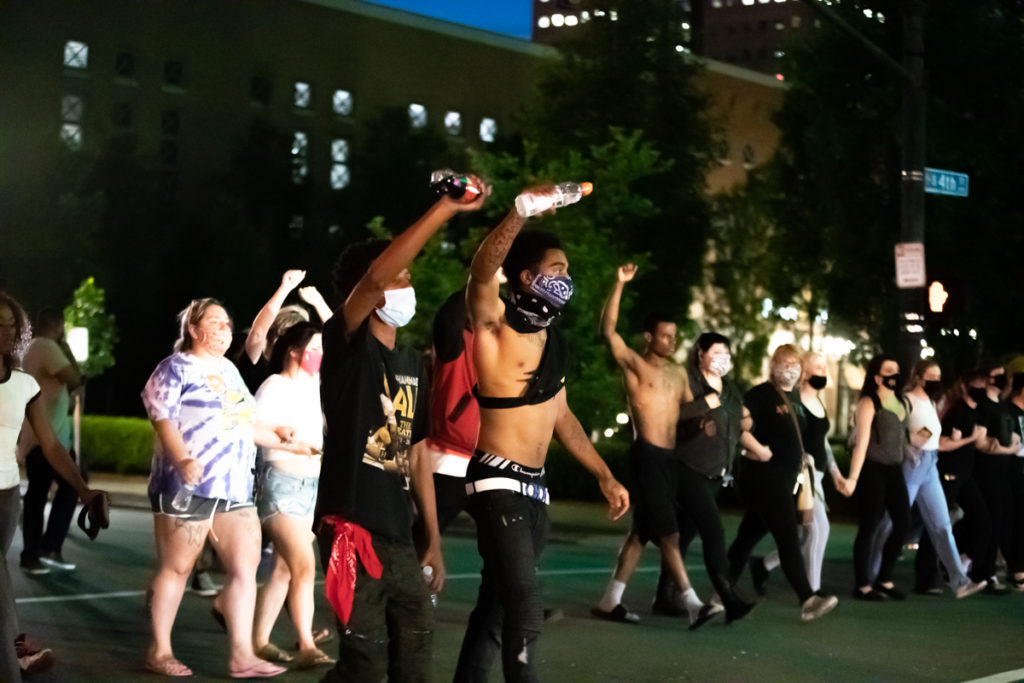 The removal of a hand from the King Louis XVI statue during Thursday night’s street protests over Breonna Taylor’s killing may very well carry the weight of premonition for Louisville and America.

This King Louis was famously beheaded in the French Revolution, erasing with him the vestiges of monarchy from that country. Louisville was named for him, ironically, for his support of American rebels trying to break away from monarchy during our first full revolution.

For Louisville, the next few days and weeks will tell whether this most-recent outrage over more deaths of innocent Black people will extend to revolution — physical or political — or whether it will simply fizzle out into complacency with a side of Netflix and chill as it tends to do.

Louisville’s protest, which brought some 500 people and some say many more, was one of several across the country. They included one in Minneapolis where George Floyd was killed beneath the knee of a cop because he was suspected of the capital offense of forgery.

Breonna Taylor, as we know, was shot to death by police in her home after they reportedly faked an affidavit for a no-knock warrant and broke through her door in early morning hours and after they had already arrested the main focus of their investigation at another address.

On Friday, as city workers cleaned the graffiti and assessed damage to public property downtown, Mayor Greg Fischer took to Facebook to ask the city to remain peaceful. Seven people were shot, not fatally, during the protest.

Standing beside Metro Police Lt. Col. Lavita Chavous, a Black woman wearing a mask, Fischer asserted that those shootings were not by police.

“These shots came from within the crowd, not from police officers. No officers fired their weapons. If you hear anything to the contrary, that is not factual,” he said.

But, how are we to believe that when police are accused of lying to get the warrant to enter Breonna Taylor’s home without knocking and claimed they had given her and her boyfriend enough notice before doing so — even though a  911 tape shows they had failed.

Fischer pledged Breonna Taylor’s death would force changes to help ensure that no more innocent Black people are shot by Louisville police — the city will suspend the use of no-knock warrants, is making sure all police wear body cameras and is improving civilian oversight of the police, including giving them subpoena power.

“We understand this is just incident in a book of unequal power dynamic between law enforcement and African Americans in America,” Fischer said, sweeping his hand to explain, “for 400 years.”

And this is playing out in our city. I think our opportunity is to show the country how we can get this right, how we can work together to make change, to make positive change and do so in a peaceful manner.”

Why should it have taken 400 years?

And why should it only now be apparent that no-knock warrants are wrong, that all police should wear body cams and that the city has long needed much, much more civilian review of the police — and with subpoena powers?

“These changes and more to come, we are not done, should signal to the community that we will continue to make improvements anywhere we can. Breonna Taylor’s name and her story will now be part of our city’s history,” he said.

Whatever it takes to provoke change was a street protest that ended with minor damage and seven people shot.

Perhaps that is why the mayor should not expect the street protests to stop now, because they seem to be working.

It also seems like the community is not satisfied with waiting.

As for the police, despite their words of empathy, they plan to meet protesters directly and with force, and they have no apologies about doing so.

“Our goal will be to allow for the peaceful expression of protest. We value the right to free speech and understand this community has a lot to say right now. We hear you,” she said. “We will not tolerate violence that leads to people being hurt. We will not tolerate destruction of our beautiful city. We are prepared to take whatever action we must to try to ensure no one else is injured during this time of unrest.”

“Allow for the peaceful expression of protest”?

For Louisville, the next few days and weeks will tell.