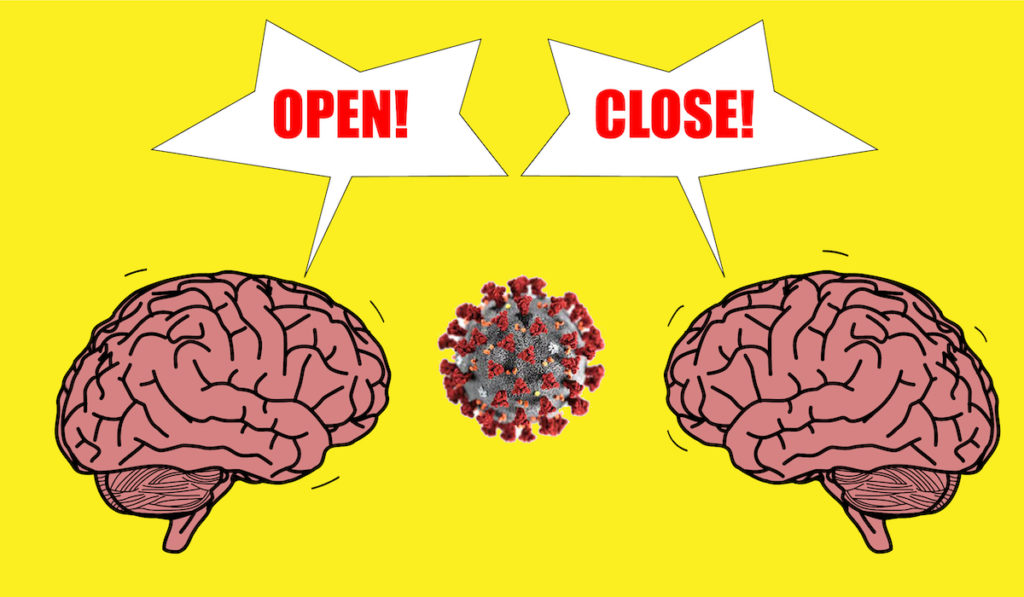 Fanboys of business and development want Kentucky to reopen its economy… yesterday. And they don’t think the public health threat of COVID-19 is enough to warrant getting in the way.

He admitted that he does not have a license in public health. But that hasn’t stopped him and others without epidemiological expertise from using COVID-19 statistics to justify opening up businesses.

“Other people don’t seem to be saying these things that seem obvious to me,” said Coomes, “so I’ll keep saying them until somebody tells me I’m wrong.”

Well, Dr. Anthony Fauci, director of the National Institute of Allergy and Infectious Diseases, hasn’t contradicted Coomes directly, of course, but in his own virtual chat with members of Congress on Tuesday, he warned against states opening their economies too soon.

“There is a real risk that you will trigger an outbreak that you may not be able to control,” which, he said, might result in “some suffering and death that could be avoided,” and, by extension, a longer path to economic recovery.

Fauci’s statements come from decades of scientific knowledge and experience. Coomes’ conclusions on coronavirus come from data on deaths in Kentucky. He cited the fact, based on state data, that 75% of Kentucky’s COVID-19 deaths have been from citizens who are 70 years and older. And that only 0.05% of Kentucky’s population in that age range have died in total. But that is not representative of the percentage of people over the age of 70 who have died after testing positive for COVID-19, which is 21.5% in Kentucky. Coomes also cited the state’s statistics that say 321 people have died in Kentucky of coronavirus so far compared to the number of people who normally die in a month, which Coomes said is 3,800. A study from UK shows that Gov. Andy Beshear’s actions on shutting down the state, though, may have saved 2,000 lives. Coomes also said, accurately, that most of Kentucky’s COVID-19 deaths have occurred in nursing homes: 46% percent as of April 26.

Piagentini has his own numbers that he uses to justify reopening the economy. They come from “very credible” studies, he said: The damaged economy will increase deaths from suicide and drug abuse. The specific study Piagentini cited, which estimates a median of around 75,000 additional deaths if the economy recovers slowly, was created by Well Being Trust, a nonprofit that pushes for changes in mental health and addiction policy, and the Robert Graham Center for Policy Studies in Family Medicine and Primary Care, a research organization for a group that advocates for family physicians. The number of Americans who have died from COVID-19 creeped over the 75,000 person mark last week and is now over 80,000.

“The policy decisions [Beshear’s] making are going to kill some people to save other people,” said Piagentini.

So, what do Coomes and Piagentini want Beshear to do?

Coomes wants most people to go back to work, although he does make exceptions for those who are elderly and with compromised immune systems.

Piagentini wants child care to open back up for people who are going back to work, and he wants businesses, not the government, to decide how they’ll open.

Their economic concerns are legitimate. Speaking on something he has something of a license in, Coomes said that a recession lasting two to three quarters is inevitable.

Last recession, it took about two years for the economy to rebound, he said.