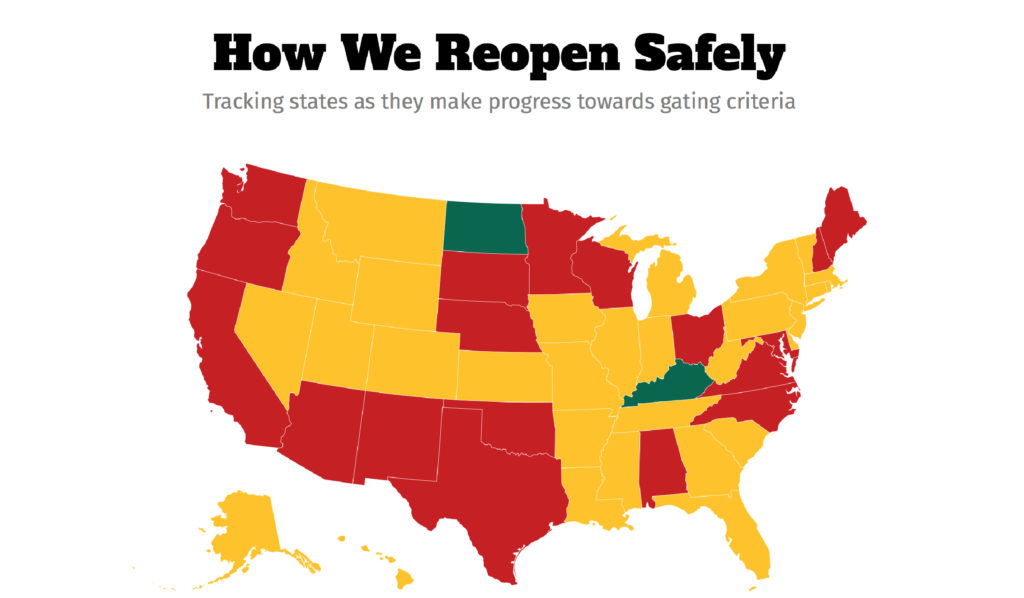 This map made by the group covidexitstrategy.org shows Kentuck has met criteria to begin relaxing coronavirus restrictions.

[Updated: Kentucky’s score of “green” has been replaced with a “yellow” because it has met only 82% of the testing target. The scores change in real time.]

Finally, we top a list that isn’t for being the nation’s fattest or heaviest smokers or something else not so good.

A cadre of public health and crisis experts say Kentucky and North Dakota are the only states to meet federal criteria so far for reopening their economies.

Not Indiana. Not Tennessee. And certainly not Ohio.

Kentucky’s received a grade of “green,” or “cleared gating criteria,” while Indiana received a “yellow,” or “making progress on measures,” Tennessee also has a “yellow” and Ohio was scored “red,” or “gating criteria not met.”

Kentucky, as good Gov. Andy has reiterated, is reopening its economy gradually so it can make sure the virus is not reasserting itself, throttle back restrictions if needed and allow testing capacity to catch up.

“The people of Kentucky’s actions have done more to flatten the curve than we ever thought was possible in a pandemic. You have rewritten the rulebook. You have rewritten all of the modeling. We would expect that as people go back to work we will have some more positive cases because we will have more people tested. We believe as an overall rate in testing that we can hold it steady. And if we see a spike in cases, if we believe we see deaths that are related to work, we will be willing to pause, to reevaluate as we go,” he said during one of his briefings.

Our neighbors, meanwhile, seem to have thrown open that barn door toward a second wave (our words). Thirty states are graded as “yellow” and 18 as “red,” including Wisconsin, where a judge overturned the stay-at-home order, promptly filling bars and restaurants.

According to CovidExitStrategy.org. , Kentucky has shown that it has:

—reached 100% of the necessary testing capacity [Ed. note: Since this was published, CovidExitStrategy.com has concluded that the state has met only 82% of target testing, based on per-capita using the latest seven-day rolling average of tests conducted.]

—a rolling seven-day average of less than 5% positive tests for that testing.

Indiana, by comparison, is graded as a “yellow,” with challenges including that had new 76 cases per million population per day. Kentucky’s was 33.

Ohio showed a 24% increase for its 14-day trend of cases.

The group, covidexitstrategy.org , says its members worked at the White House, Department of Health and Human Services and on the Ebola epidemic in West Africa. “We are a nonpartisan group, having worked across multiple administrations,” according to its website.

The criteria are derived from publicly available data and presented graphically. “It’s supposed to be the progress bar for the country,” Ryan Panchadsaram, former deputy chief technology officer at the Department of Health and Human Services, told The Washington Post.

By its measure, Kentucky should be Kentucky Proud.

So, if you are thinking of hitting that Ikea for lingonberry pancakes or that store with miles of chili peppers, you might want to heed Gov. Andy and keep it local.

“Folks, if we are traveling, it is still not safe,” he said. “I believe that people should think very carefully about their vacation plans for the summer. Our hope is that we can open up some state parks. Obviously for our perspective that is safer because it falls within the state and it falls within all the guidelines we have been doing.”