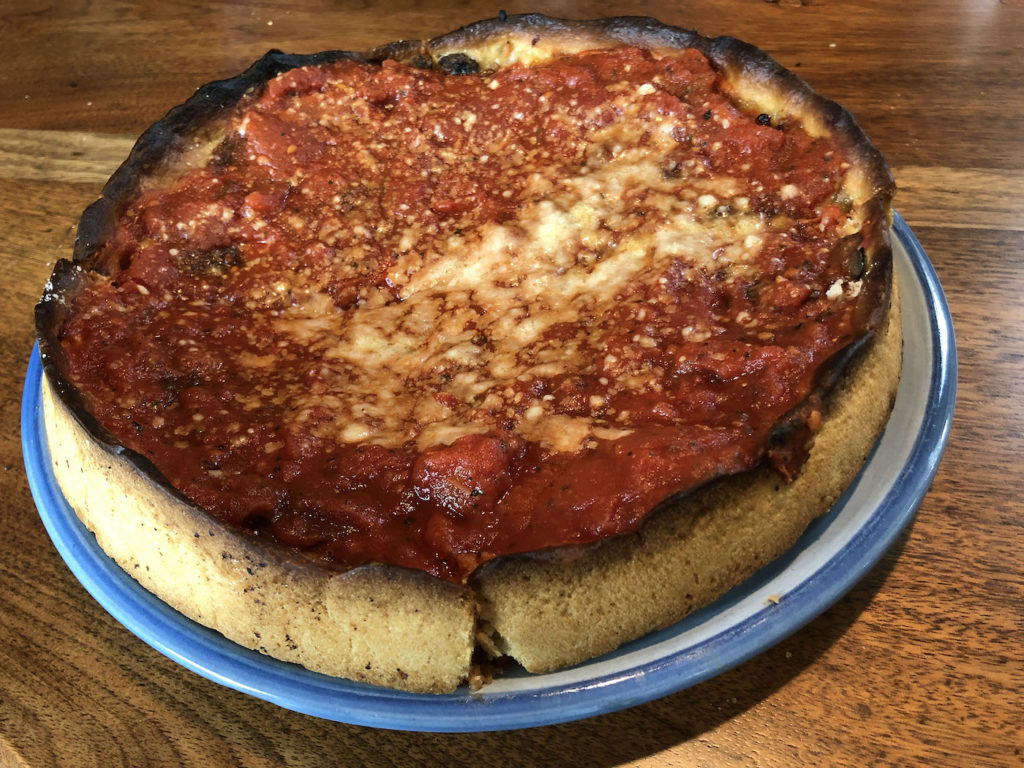 A whole deep-dish pizza from Jake and Elwood’s makes an imposing serving. | Photos by Robin Garr.

Jake and Elwood’s opened its Chicago-style pizzeria in Clifton at 11 a.m. Monday, March 16. Does that date sound familiar?
Yep!

That’s the day that Gov. Andy Beshear told all the state’s restaurants to put a halt to dining in.

“We are mandated to close for dine-in at 5 p.m. today,” the restaurant posted on its Facebook page less than two hours later. “CARRYOUT is available!!! We’re working on delivery. The blues will prevail!”
Indeed.

As we know from the restaurant’s Blues Brothers namesakes Jake and Elwood, Chicago people do what needs to be done.

When the doors closed to sit-down dining, the owner John Thurlow, a Chicago native, promptly shifted the plan, offering pizza-to-go to waiting throngs. Within the first two days he had run out of pizza boxes and containers and had to close for a day to restock. He closed again for a couple of days at the end of March to refine the operation but came right back up. The restaurant has been earning uniformly positive reviews from just about everyone I know who’s tried it, on the HotBytes forum and across social media.

(Since I wrote this review, Jake and Elwood’s opened last Friday for 33%-capacity seating and all the rest of the state’s “Safe at Work” rules for restaurants, and it is continuing takeout as well.)

It is located in the landmark, yellow-brick, Frankfort Avenue building that long housed Clifton’s Pizza Co., and which more recently was home, briefly, to Steve-O’s Italian Kitchen. Jake and Elwood’s bills itself as “a Chicago tribute restaurant” specializing in Chicago deep-dish pizzas, Chicago hot dogs, sausages and Italian beef sandwiches.

Want your pizza crust caramelized? That will be another $3.50. Light appetite? Buy it by the slice for $3.25 for cheese, pepperoni or veggie. A half-dozen variations on the Chicago hot dog (“dawgs”) are $4.99 (for the classic, Chicago-style dog or chili cheese dog) to $5.99 (for a Maxwell Street Polish sausage or Italian sausage); you can build your own for $2.99, plus 49 cents per topping.

Before I dive in to my hefty pizza, let’s get one thing out of the way: I was weaned on New York-style pizza, thin and foldable, and learned to love its Neapolitan ancestor, the original pizza, on trips to Italy. Chicago’s heavy, deep-dish format doesn’t come naturally to me. (It should be noted that Chicagoans themselves tend to favor a thin pizza, served in tavern-cut squares, or the occasional indulgence in Giordano’s stuffed pizza, which is like a huge calzone with another crust on top!)

But Jake and Elwood’s pizza is the classic, Chicago deep-dish, and it is very good indeed. Coming at it with an open mind and a hungry tummy, I was impressed. Even the 10-inch pizza makes an imposing serving. We enjoyed a 10-inch Wrigleyville ($10.99) with tomatoes, mushrooms and onions; it normally comes with spinach, too, but I ordered ours without to keep things simple.

It was at least an inch and a half thick and beautifully made. The crust had been formed in a deep, black iron pan that imparted a crisp, tasty edge, then filled, in order, with a layer of stretchy, whole-milk mozzarella, then the toppings and finally an excellent tomato sauce — chunky, garlicky, not too sweet — spread across the top in a warming blanket. The crust boasted a light-golden color and a crisp but tender bite that almost made me think of biscuits. It was cut in four quarters, and one quarter alone made an ample lunch.

The Chicago dog ($4.99) is built on Chicago’s own Vienna Beef frank with its snappy natural casing and all the traditional trimmings. A soft, squishy, white, poppyseed bun was smeared with bright-green pickle relish and filled with a small frank; two pale, firm wedges of out-of-season tomato; a dill pickle wedge; three hot, vinegary peppers; a thin stripe of ballpark yellow mustard; and a small amount of chopped onion. It was standard for the genre but not really impressive.

The garlic knots, however ($3.99 for six, $6.50 for a dozen) were impressive. Short breadsticks tied in knots were baked like mini-loaves, coated with garlic oil and dusted with grated Parmesan. It was an appetizing snack, hard to stop eating, so good that the tangy, cayenne-laced beer cheese and good marinara sauce weren’t really needed.

A filling meal, with plenty of leftovers, came to a reasonable $29.11, plus a 25% tip. I’m adding a little extra to the tip during these difficult times, and I hope you are, too.