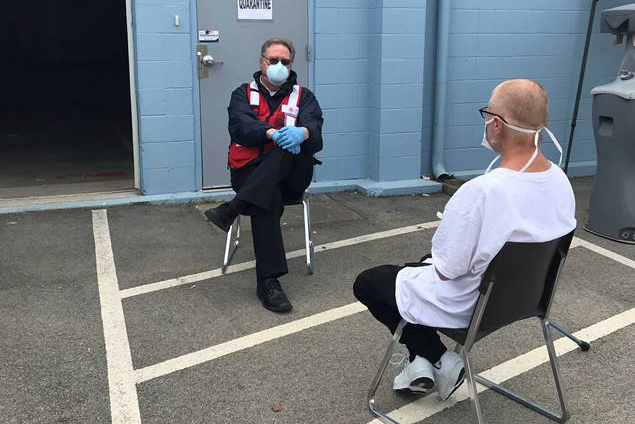 A Joy Center resident meeting with a spiritual counselor for some morale boosting. | Photos provided by The Salvation Army.

The city’s solution to stymieing the spread of coronavirus in Louisville’s homeless population is The Salvation Army’s Joy Center, two main rooms in a 35,000 square foot warehouse: one for people who have been exposed to someone with COVID-19 and another for those who have tested positive.

Major Roy Williams of The Salvation Army’s Louisville Area Command said he believes the city’s strategy, which also includes handwashing stations around town, has worked. “I think the way the city has run this with The Salvation Army and with Phoenix Health has been a tremendous success,” he said. “I think we’ve slowed it down by all the measurements we’ve taken.”

To solve the problem of people who are homeless and who have coronavirus, other U.S. cities, including San Francisco, have elected to set up people in hotels rather than shelters. Williams said that he thinks the Joy Center is a “good way” to handle the issue. “Putting them in hotels, I guess that would work,” he said, adding that hotels might cost more to keep clean. Twenty-two people have gone through the shelter since March, all sent there by FHC — Phoenix, Louisville’s free clinic for people who are homeless. The most who have been at the Joy Center at one time has been eight.

As an on-the-ground advocate for Louisville’s homeless population, Chad Caine with Keep Louisville Warm has not seen the Center for himself. It’s important for people on the streets who contract COVID-19 to have a place to stay, he said, but he has questions and concerns about the shelter. “I know people that are very much involved in The Salvation Army,” he said. “I know their intentions are good, but my ﬁrst question was, where was this when we needed emergency beds last winter?”

Each room at the Joy Center has 50 mattresses laid out on metal shelves, as well as a TV, Wi-Fi, rest rooms and a dining area, where three meals a day are served. The only common area that both sides share is a stairway heading outside to a shower trailer, which is used by everyone in shifts. If residents are craving social interaction, The Salvation Army provides someone to talk to them, six feet away and wearing a mask.

Caine said he wonders how people are supposed to social distance in the shelter if it ﬁlls up, and he worries that people who are homeless who get sick may be separated from their families and forced to go to the shelter. According to Williams, there is enough space in the shelter to socially distance, and beds are six feet apart. Residents are not forced to stay at the shelter either, he said, although if they have tested positive and leave, staff will call the police.

They wouldn’t do the same if the person had just been exposed to COVID-19, he said. The city and The Salvation Army are spending $10,000 to $12,000 per week, mostly on security, to operate the Joy Center, Williams said. Their efforts also include a new day and a new overnight shelter at The Salvation Army and extra meals. Caine has bigger concerns with the city’s response to coronavirus for the homeless population. The handwashing stations seem to be working, he said, but the city continues to tear down camps, which is not advised by the CDC.

Louisville Metro has stopped clearing camps on city property, according to one city ofﬁcial, but police have enforced clearings on private property that were requested by the owner. Over the past two weeks, LMPD has cleared two camps: one at Preston Street and Inter-state 65 owned by the state and another on CSX property, according to the mayor’s ofﬁce. Only one person lived at the ﬁrst camp, but multiple people lived at the second. Caine also believes that testing has been insufﬁcient. Drive-through testings sites are not helpful to those who don’t have vehicles, he said. “To me, it’s more of a liability to have people walking up, being turned away and walking back to their neighborhood and possibly having COVID instead of given them that test right then and there,” he said. Without testing, the true number of people who are homeless with COVID-19 is unknown and, by extension, the number of people who should be at the Joy Center, is too.