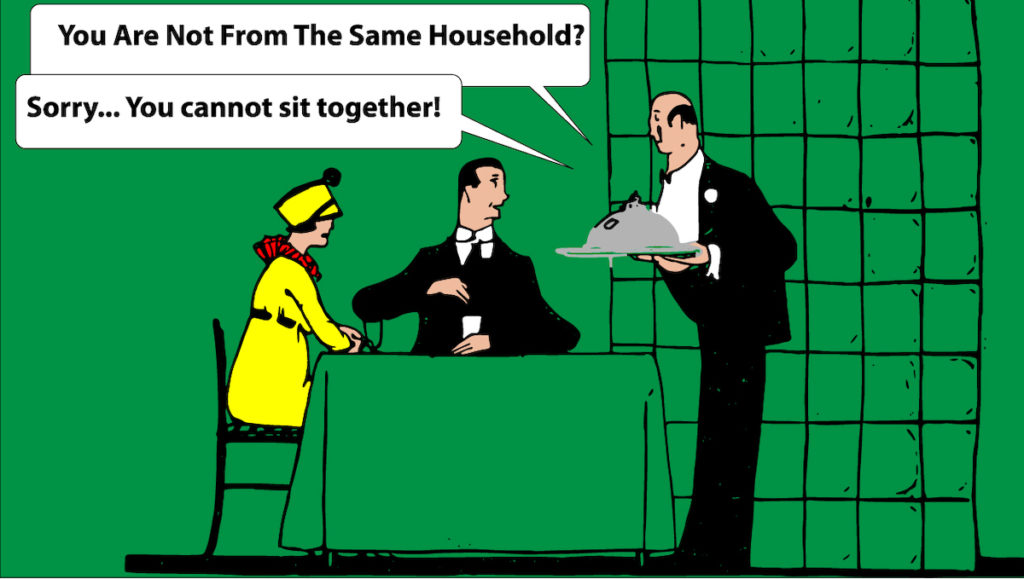 “Excuse me, but do you all live together?”

“Are you all from the same household? If you are not, I cannot allow you to sit together tonight.”

“Uh, maybe we will go across the river to Indiana.”

Yup, starting Friday, May 22, dining out in Kentucky gets complicated — the hospitality industry will become less hospitable because of Gov. Andy’s new coronavirus requirements, which he says are designed to keep you alive.

A quick survey of our neighbor states’ restaurant reopening rules shows Kentucky’s are the strictest.

For our restaurants to reopen, for instance, only in Kentucky must servers and hosts become Table Police as part of a long list of requirements:

“Persons not living within the same household should not be permitted to sit at the same table,” according to the requirements.

And: “Restaurants should limit party size to ten (10) people or fewer.”

Also, Kentucky restaurants must operate at only 33% of allowed capacity and enforce the 6-foot rule for diners.

Indiana is allowing restaurants to operate at 50% capacity with the 6-foot requirement. Indiana is keeping tables to just six people, and Tennessee, 10, but that state has no limit on capacity. Ohio also has no limit but says diners must be 6 feet away from each other.

Kentucky Restaurant Association doyen Stacy Roof told LEO she wishes Gov. Andy had appointed a restaurateur advisory board, as Ohio did, before making its rules.

“Our state never put that together. And so I am guessing that had a lot to do with the language that Ohio drafted. Because they had direct input, and I mean, they had like 20 or 30 plus restaurateurs that were involved in that process,” she said.

At first, Kentucky officials wanted to limit restaurant capacity to 25%, she said. “And I said: Absolutely not. You will be laughed off of the planet if you propose 25%. That can’t work for any operator. Please don’t consider anything less than 50%.”

The association, which represents almost 1,000 restaurateurs, had asked that restaurants be allowed simply to ensure diners sat 6 feet apart, rather than be subjected to a uniform percentage of capacity, Roof said. “It doesn’t put a number on it, and it proportionally takes care of businesses by size,” she said.

When Gov. Andy announced the guidelines at his Good News and Bad News with Brews Briefing a few weeks ago, he said: “I know this isn’t the capacity restaurants probably wanted, but studies we’ve looked at show we have to be really careful with this step.”

This week, Gov. Andy said restaurants may be allowed to increase capacity… in time:

“We want to give enough time to make sure we are doing it well. That the practices are in place and the virus is still under control. So, we need to go two weeks plus because that would be the first step. But if folks prove that we can do this and do this well, and it becomes part of our DNA, then we will absolutely increase capacity over time. But remember — doing it gradually helps us with contact tracing, with the testing and with our levels of hospital beds and with the ICU. Gradual means safe in a reopening in a time of coronavirus.”

In the meantime, several restaurant owners have said on Facebook they do not plan to reopen for now. Some cited the layouts of their restaurants as too restrictive for the third-of-capacity rule. Others said they could not make enough money to justify reopening under those conditions. And others including Ryan Rogers, owner of bar Vetti, Royals Hot Chicken and Feast BBQ, felt it just wasn’t safe enough.

Will the 33% work for Kentucky restaurants?

New Orleans set capacity at 25%, which has not worked well for restaurants there.

That is what Melvin Rodrigue, president and chief executive of Galatoire’s Restaurant in New Orleans, told President tRump during a meeting with restaurateurs last week. Here is an excerpt of the transcript, with all of the interruptions and non sequiturs we would expect from the Dotard in Chief:

Rodrigue: “To literally think that this week, when we reopen at 25%, we’ll lose —

Trump: We’ve got to get up, and it’s — I hope it’s going to be up very fast. I hope the governor does that pretty quickly.  Let’s see how it goes. A lot has to do with what I said in my opening remarks. Ivanka, do you have anything to say? I know you like this industry.”

Speaking of family, as for Kentucky’s household members-only rule, Roof said she believes her members will do all they can to comply. “But I don’t know how honest people will be with their responses,” she added.

Wait? People will lie so they can break bread with their friends, even if it means sharing more than a few laughs?

“If we have been primarily with our families for two months, probably the first time we go out as a group may not just be our family,” Roof said.

Uh huh. After sitting across the table from your beloved family for every meal, who wouldn’t want better scenery?

“It just puts hospitality in an awkward position,” Roof said. “This goes against the nature of — ‘We’re so glad you are here, and I don’t care who you are, we are ready to serve you.’”

What about, say, a couple that does not live together but have decided to become their own “pod,” “quaranteam,” or “bubble,” as Gideon Lichfield wrote in MIT Technology Review. That means pledging to limit contact to just themselves and be honest about when they break that isolation so they can decide whether they are kicked out of the pod.

Lichfield wrote: “My bubblemates and I have all been pretty strict in our precautions up to now, but everyone does things a little differently, and I’ve commented to other friends that agreeing to bubble up (or is it bubble down?) with people is like negotiating an open relationship: What’s allowed? What isn’t? What do we need to communicate about? How do we resolve disagreements?”

In Canada, some provinces have allowed “double bubbles,” that, is two households that form pacts to isolate together. (No, you gutter dwellers, we are not talking about some “Bob & Carol & Ted & Alice” action, for those of you who are old enough to catch the reference.)

As The Washington Post explained: “There are rules — and they are not for the commitment-phobic. Each household may join with only one other household. Both sides must agree — for better, for worse — to a mutually exclusive relationship.”

“Excuse me, but do you all live together?”

“Are you all from the same household? If you are not, I cannot allow you to sit together tonight.”

“It’s complicated. Maybe we will go across the river to Indiana.”