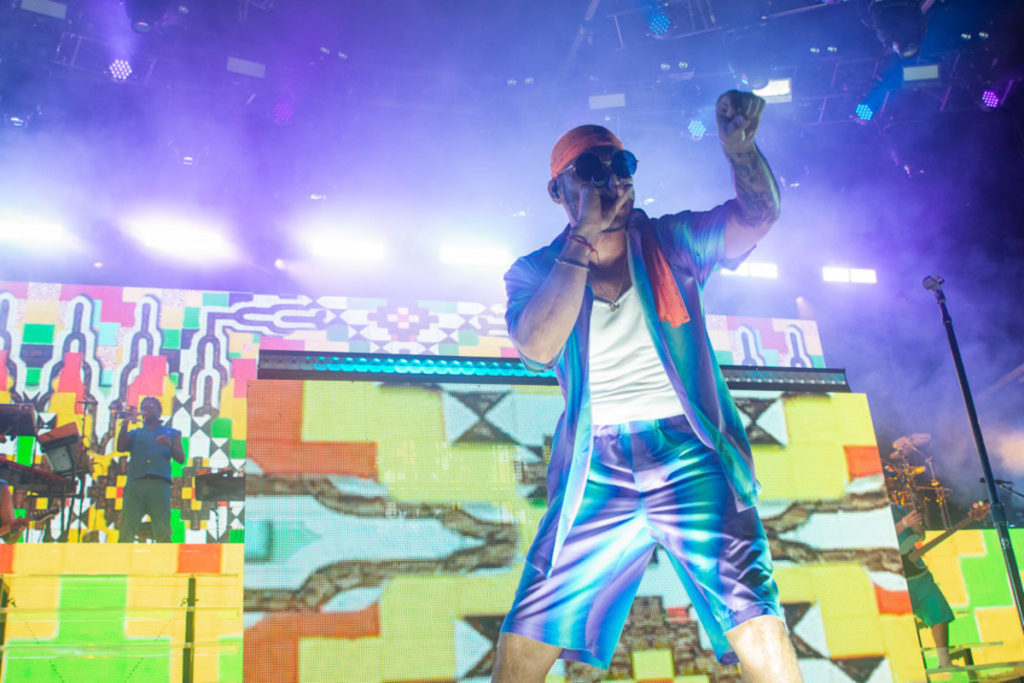 Anderson. Paak And The Free Nationals at Forecastle 2019. | Photo by Nik Vechery.

Last week, I wrote about the deep economic impact of a year in Louisville without music festivals. Losing festivals like Forecastle and Louder Than Life goes way beyond just hurting big corporations and musicians with mansions — the cancellations are also detrimental to just-getting-by bands, your favorite food trucks and the city’s microbreweries and about every other nearby business that depends on foot traffic and tourism dollars. It’s an extra kick to the side from a brutal pandemic that has us all just scrambling to get back on our feet. This week, we decided to go a little bit of a lighter route and remember a few favorite sets from Louisville festivals in the last five years. Here are a few that came to mind, although this is not even close to a complete or comprehensive list. And feel free to leave a comment or send us a line about your favorite festival set.

Dr. Dundiff and Friends
Forecastle 2015
We’ve mentioned this set several times over the past half decade, but both its significance and how unique it was can’t be overstated. When local producer and musician Dr. Dundiff convinced Forecastle to add him and his friends to the lineup in 2015, he gathered some of the city’s best hip-hop artists and created something that was part showcase, part live album. With a live band consisting of guitars, keys, saxophones, a trombone and Dundiff on drums, people such as Shadowpact, Rmllw2llz, Jack Harlow, 1200, James Lindsey, Touch A.C., Skyscraper Stereo, Kogan Dumb and Jim James dropped onto the stage. It was a revolving door of Louisville talent. And maybe the greatest thing about the set was how many fans showed up for it. Even though it happened in the daylight on a side stage, people flocked to it. While sometimes you just get cookie-cutter artists playing cookie-cutter sets at big festivals, this was something special.

Margo Price
Seven Sense 2015
Every year, there are musicians and bands that you know you only have a certain amount of time to see on a small stage because it’s inevitable that they blow up. That was Margo Price in 2015. At that point, she already released the single “Hurtin’ (On The Bottle)” and was signed to release her debut album on Jack White’s Third Man Records. But, on that humid summer day in Louisville, she played at noon on a tiny stage on Preston Street to about 20 people. And while it was a short set, you walked away knowing that her career trajectory was going to skyrocket. She had the voice, the authenticity, the writing prowess. A few years later, she played Forecastle, which was a clearly evolved set — she became a better singer, lyricist and performer. But there’s was a magic about that day in 2015, because of what was about to happen next.

PJ Harvey
Forecastle 2017
PJ Harvey has a transcendent amount of talent, slicing through genres without getting stuck to categorizations. She was never quite grunge, or punk, or post-punk, or folk, but she delivers the best aspects of each, and she’s a hell of a writer. Her releases have been careful and consistent. The problem? She barely tours, and almost never through Louisville. But, in one of the most savvy books in Forecastle’s history, she played a late afternoon set in 2017. With a backing band that emphasized percussion and brass, her set dove heavily into 2016’s The Hope Six Demolition Project and 2011’s Let England Shake, featuring songs about inequality, gentrification, war and destruction. It sounded like she was leading the marching band to Armageddon, but her songs really just held up a mirror to some of humanity’s ugliest moments, and I think it made us all think a little harder about society. She also played a couple of hits from the ‘90s. It was a well-balanced set that gave a few nods to the past, but never leaned on it.

Stevie Nicks
Bourbon & Beyond 2017
Stevie Nicks has one of the most singular, powerful voices in rock history. But, there’s always a chance, when you see a performer deep into a storied career, that they might not live up to the lofty expectations that their name carries. That’s not the case with Stevie Nicks, who put on an incredible set at Bourbon & Beyond in 2017. Her voice is still rich, full of mystery and intensity, and her deep discography has so many hits, both from her time in Fleetwood Mac and from her solo career. Nicks is also a master of meshing golden-hooked pop and gritty, bluesy rock. It’s sad to see an icon disappoint, but it’s extraordinary watching someone still soaring a half century into their career.

Tyler Childers
Forecastle 2019
Tyler Childers seemed to go from playing at 400-capacity venues to selling out the Louisville Palace before we could even blink, but his late afternoon Forecastle set really helped him open up some more eyes. In 2017, Childers’ sophomore full-length Purgatory, which was produced by Sturgill Simpson, catapulted him in the right direction, but it was the word-of-mouth from his live performances that really accelerated his progress. And while he was a household name among alt-country fans a few years before, it seemed that sets like the one at Forecastle helped widen his audience. I know a lot of people who are of the “country isn’t really my thing” crowd, which is completely understandable considering how many bad representations of the genre are out there floating around, but I also know a lot of those same people who left that set completely blown away.

Guns N’ Roses
Louder Than Life 2019
We’ll probably mostly chalk this one up to nostalgia, and me thinking that I would never get to see them, but Guns N’ Roses were a lot of fun at Louder Than Life 2019. They showed up about an hour late, but, you know, they have a reputation to uphold, and when they did get out there, they played about everything you wanted to hear and more, clocking in just under 30 songs. We got plenty of hits, some deep cuts, a few expected covers (“Live And Let Die”), a few unexpected covers (“Wish You Were Here”), and pretty much the general energy and madness that you would expect from a Guns N’ Roses show. Watching Axl Rose scream the “Paradise City” lyrics is a very acceptable way to end a day at a heavy metal festival.

Anderson. Paak And The Free Nationals
Forecastle 2019
Anderson. Paak had one of the slickest festival stage setups I’ve ever seen. The vibrant, multi-leveled design allowed the versatile musician plenty of space to roam and create. The design perfectly highlighted and encapsulated Paak and his band, who are musical scientists, splicing together genres and influences, Frankenstein-ing funk, jazz, soul and hip-hop into the future. Whether he was on the stage’s highest structure playing drums, or down beneath running with a mic, Paak had a masterful presence. He’s able to make intricate music that’s soaked in adrenaline, and he charges it up even more in a live setting.