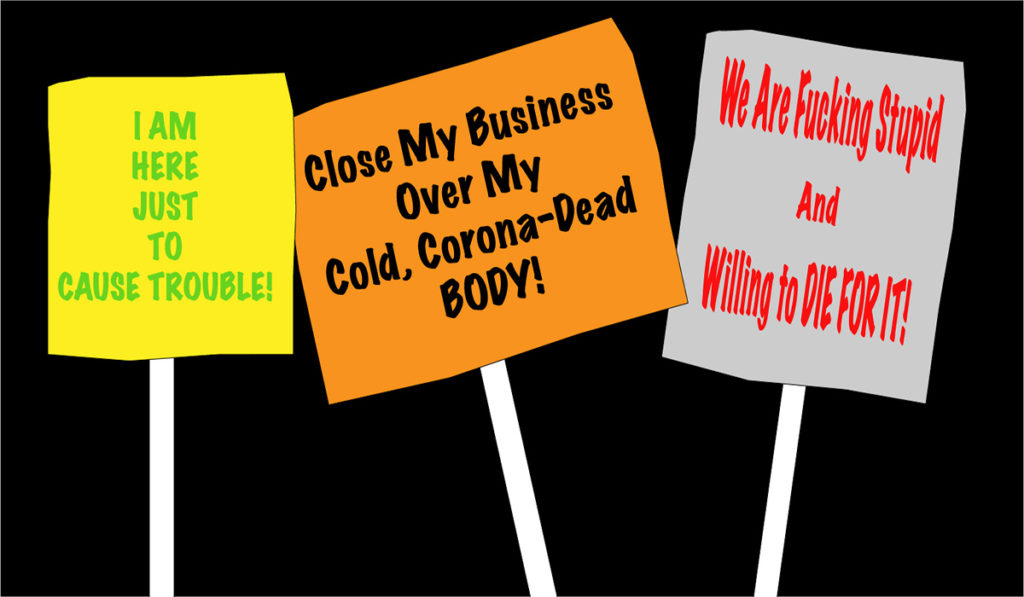 [Update: Protesters returned Friday… in vehicles… for a drive-by rally and did not interfere with Gov. Andy’s briefing.]

Will they be back tonight, the 100 or so Pirates of Pandemic, those Scalawags of Scourge who tried to shout down Gov. Andy during his Coronavirus Good Counsel and Singalong Session on Wednesday evening?

The Courier Journal is reporting that a “Caravan at the Capital” is in the works for Friday.

Thursday’s briefing was not disturbed, perhaps because of the cordon of state police and statement from the state health commissioner that says protesters can take part in a “drive-in and drive-through option” that will “allow people to use their voices and be heard while protecting the public health.”

Maybe that will keep them from being such assholes.

Certainly, they are constitutionally protected to assemble and to free their speech at the good governor, but wouldn’t they have made their point Wednesday just as strongly by protesting less loudly — without upsetting even those who would otherwise have supported them?

Instead, this collection of fringe buffoons, libertarians (or is that repetitive) and people who favor the dollar bill over belief in science and medicine brought together a volatile mix of ignorance, one-upmanship and circus to the wide lawn before the Capitol.

Ostensibly, they were organized by the Faceplant group “Kentucky is Open for Business.” Or, maybe it was just one of that group’s organizers, a former Gov.-reject Matt “Pray Me a River” Bevin appointee who made unsubstantiated claims of voter fraud when he lost. CJ reporter Phillip Bailey wrote that she was asked about whether the protest itself was potentially spreading the virus. She said: “I don’t know. I can’t control what diseases people have and don’t have. All I know is that people are fed up.”

They were fed up, allegedly, with not being able to open their businesses, since Gov. Andy has closed all non-life sustaining enterprises (not including liquor stores or gun shops, but that is another story).

Or, were they fed up that churches have been deemed mass gatherings aka Petri dishes for epidemic spread?

Or, were they fed up that he is allowing Kentucky’s sole abortion provider to continue its Supreme Court-sanctioned work?

Or, were they fed up just with being told what to do by a… a Democrat (otherwise known as Barack Obama syndrome)?

All of it. Some of it. Or, were they just cheerleaders of chaos?

They reached into the governor’s briefing using a megaphone and even what looked and sounded like a shofar, a ram horn trumpet used in Jewish religious ceremonies and once (and maybe now) as a call to battle.

“Open up the church!”

“Abortion is not essential!”

They had goofy signs: “We are not surrendering our liberty for your false sense of security.”

And one funny one: “Who is cutting Andy’s hair.”

Through it all, Gov. Andy was stoic and maybe even politically calculating as he remained calm and hardly reacted to the din from outside that often made it difficult to hear him speak. As he revealed the latest numbers of cases and deaths (seven more), you could hear the chants of: “You are not the king!”

Gov. Andy tried to explain, again, that opening businesses now would be deadly: ”We do have some folks up in here in Kentucky today — and everybody should be able to express their opinion — that believe we should reopen Kentucky immediately, right now. Folks, that would kill people. That would absolutely kill people.”

Not long after it was all over, the social media sleuths had figured out who was behind the rally, and they were doxing and keyboard jousting.

The “Kentucky is Open for Business” appeared to have disappeared from Facebook.

But not before CJ columnist Joe Gerth spied a comment from one person (or Russian bot?) who referenced William Goebel. As Gerth explained, Goebel was the only governor ever assassinated in the United States, winner of a disputed election in 1899 and shot outside the old State Capitol before taking office.

So, will they be back Friday? Will they draw people from even outside of the state, as did the gun rally at the Capitol in January (oh, for those placid times).

Will counter-protesters show up?

Have we lost our fucking minds because we cannot sell used chairs because doing that might kill us?