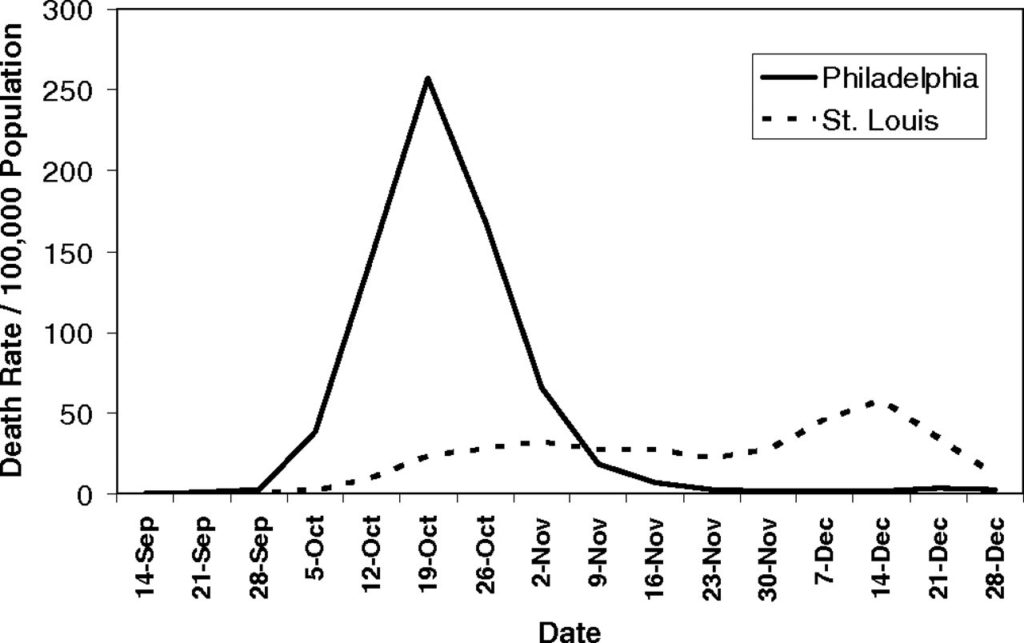 If the past is any predictor of future performance, and it is in this case, then we should look at the flu outbreak of 1918 in Louisville before we gather together to reopen businesses and dance the Coronavirus Jig.

As Gov. Andy has said repeatedly: We do not want to be Philadelphia, which suffered for being slow to enforce social distancing at the outset of the 1918 pandemic that killed an estimated 650,000 Americans. We are now at about 42,000 COVID-19 fatalities in just seven weeks. COVID-19 was the No. 2 killer from April 6 to April 12, behind No. 1 heart disease.

But we also do not want to be St. Louis, which did flatten its curve by using non-pharmaceutical means relatively sooner than did Philadelphia. But, then it relaxed those and, oooofff — it had more deaths from the flu than during its first peak.

The St. Louis Dispatch reported: “The quarantine was temporarily lifted Nov. 18 but reinstated when the flu roared back in December. By Dec. 10 the flu peaked in the city with 60 deaths in one day. After illnesses declined sharply, the quarantine was lifted just after Christmas.”

Or, in more clinical terms, a paper published in the Proceedings of the National Academy of Sciences of the United States concluded that non-pharmaceutical interventions or NPIs — such as social distancing, barring mass gatherings and closing businesses — had to be in place until a pharmaceutical fix was found or was sufficiently available:

“Finally, and this is perhaps the most important observation, no city in our analysis experienced a second wave while its main battery of NPIs was in place. Second waves occurred only after the relaxation of interventions.”

“In practice, and until emergency vaccine production capacity increases, this means that in the event of a severe pandemic, cities will likely need to maintain NPIs for longer than the 2–8 weeks that was the norm in 1918.”

In Louisville, it took about seven months from the first cases at Camp Zachary Taylor until the spring of 1919 before the metro area returned to normalcy. The good news is that for the last two or three months, closures had been lifted, even though the flu persisted.

The Influenza Encyclopedia’s essay on Louisville shows this tug of war between those who wanted to keep businesses, churches and schools closed and those who wanted them to open. At one point, “Clergy argued that allowing regular religious services would lift the morale and spirit of residents, and thus stimulate their resistance to influenza.”

In Louisville, the beginning of the epidemic was somewhere around Sept. 24, when newspapers reported over 100 soldiers at the camp were ill with influenza. By Oct. 7, the state closed “all churches, schools, and places of amusement or assembly until further notice. Louisville Mayor George W. Smith issued a statement endorsing the state order and putting it in full effect in his city.”

“As the epidemic gained in intensity, hospitals soon were stretched to the breaking point. The health department interceded by opening a 75-bed emergency hospital at the Hope Rescue Mission on Oct.13, under the direct supervision of acting health officer [R. B.] Norment.”

“Then, suddenly, the number of new influenza cases started to drop, prompting some to surmise that the epidemic would soon come to an end. On Oct.18, members of the state Board of Health, the U.S. Public Health Service, military authorities, and a number of local Kentucky health officers — including Acting Health Officer Norment — met at the Seelbach Hotel to discuss the possibility of lifting the ban, at least in Louisville. Instead, state health authorities not only affirmed the existing closures, but also tightened and extended the restrictions. Effective the next day, the state Board of Health ordered all saloons and soft drink stands to close between 6:30 pm until 6:30 am. Only churches and synagogues had some measure of latitude – the Board permitted churches to open for individual prayer and meditation.”

“Louisville’s epidemic continued to abate over the course of the rest of the month. By Oct. 22, the city’s newspapers were happily reporting that influenza’s high mark had been reached on two weeks earlier, and that the number of new cases was on the steady decline. On Oct. 30, state and local health officers, as well as representatives from the Red Cross and the Louisville Board of Trade, met once again at the Seelbach to discuss the lifting of the bans. Norment stated his belief that the city’s epidemic had run its course, and that there would be no danger in allowing public gathering places to reopen. Clergy argued that allowing regular religious services would lift the morale and spirit of residents, and thus stimulate their resistance to influenza. The arguments fell on deaf ears, as once again the state Board of Health voted to continue the closure orders, although this time it provided a possible timeframe for when they might be lifted – one week. The problem was not so much with Louisville as it was with the surrounding Jefferson County, which was still in the midst of a serious epidemic. If Louisville were allowed to reopen, some believed that visitors would flock to the city for amusement, thus bringing influenza with them. Until the situation in Jefferson County improved, the bans would remain in place.”

“Churches reopened on Sunday, Nov. 10, the first time the pews were occupied for regular service in five weeks. To prepare for the complete reopening of the city and to help stave off a return of the epidemic, the Louisville Boards of Health and Public Safety issued a set of regulations to prevent crowding. All stores were to be fully ventilated at all times and kept at a proper temperature. All employees exhibiting symptoms of illness were to be sent home at once, returning to work only when provided with a certificate from their physician. Stores were to employ enough staff to prevent congestion. For pool halls and bowling alleys, owners and managers were to grant admittance to those actually engaged in games. Moviehouse and theater managers were likewise prohibited from allowing crowds to gather inside their establishments. This did not prevent crowds of eager entertainment seekers from forming long lines as people rushed to purchase tickets for the evening’s shows.”

“By Thanksgiving, physicians were reporting a slight but nonetheless noticeable increase in influenza cases. Norment remained optimistic that the worst was over, and that, while Louisville would experience elevated case burdens throughout the winter, residents need not fear a return of the epidemic. A little over a week later, attendance at schools in the Crescent Hill neighborhood had dropped by 50% due to influenza. Physicians reported a considerable increase in cases. In fact, a group of concerned physicians petitioned McCormack and the state Board of Health to re-implement the closure order and gathering bans so that the epidemic could be brought under control. The Board refused the request because members hoped that a recently shipped supply of 100,000 doses of influenza serum would soon do the job. In the meantime, the Board asked residents to avoid crowds, cover their coughs and sneezes, and remain in bed if feeling ill.”

“On Dec. 12, Health Officer [T. H.] Baker — returned from his medical leave — called a meeting of the Mayor, Norment, and McCormack, as well as representatives of the medical community, churches, schools, fraternal organizations, businesses, and amusement concerns to discuss whether Louisville should implement a second round of closure orders. Of particular concern were schoolchildren. Reviewing the latest data, the group agreed that a second school closure order was necessary. The next day, Baker announced that schools would be closed and children under 14 banned from theaters and other public gathering places effective Dec. 14. To further safeguard youngsters, the city health department stationed inspectors in stores and motion picture theaters to serve as enforcers. Children did not have to wait long before regaining admittance to their favorite places of amusement. Within two weeks the epidemic subsided drastically, leading Baker to reopen Louisville’s schools on Dec. 30. A week later, he announced that children could once again attend movie houses and five-and-10 cent stores.”

“Louisville was not quite out of the woods yet, however. In late-February 1919, the health department documented a sudden, third spike in influenza cases that lasted approximately five weeks. The cases were generally much milder this time, however, and thus neither Baker nor the state Board of Health considered issuing a third closure order. It was not until the end of spring that conditions returned to normal.”

Let’s not be St. Louis. Or even Louisville.