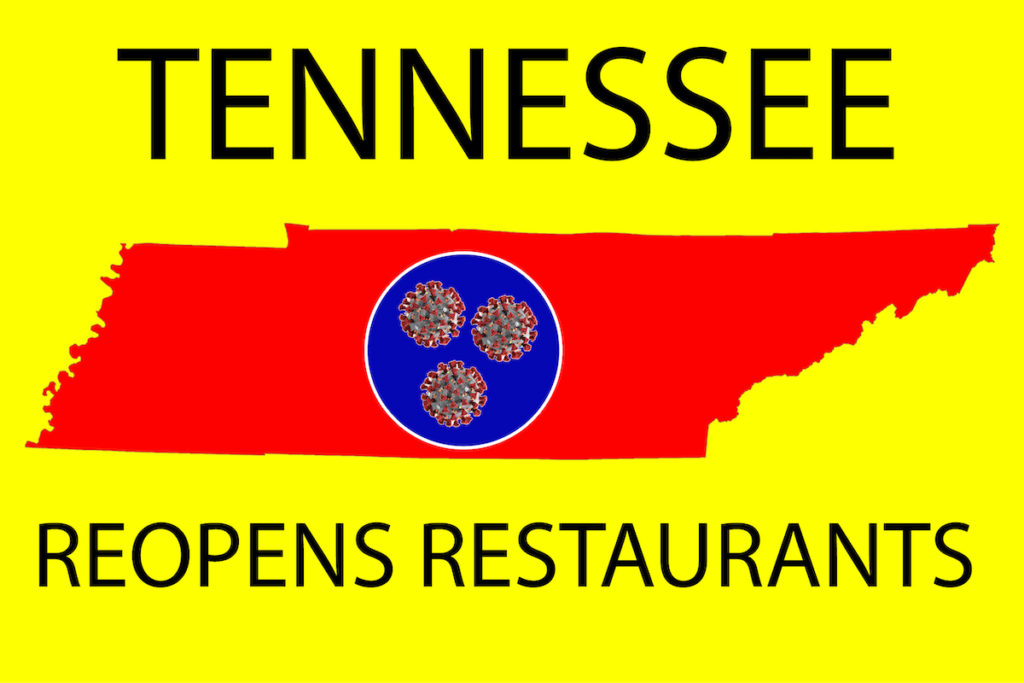 We all have had one — that crazy neighbor who plays “Stairway to Heaven” at volume 11 at midnight, parks on the lawn and uses your rose bushes for an ashtray.

Tennessee is allowing restaurants in rural areas to reopen Monday, while retail businesses are set to do so Wednesday in 89 of Tennessee’s 95 counties. (Nashville, Memphis and Knoxville are allowed to make their own opening dates.)

In contrast, the ineffably measured and mature Gov. Andy is waiting to reopen the state. He wants Kentucky to have at least 14 days of declining cases and meet other benchmarks. Yet, Tennessee just logged 478 more cases, which The Tennessean reported is the highest number recorded in one day so far in the state —and the fifth consecutive day when the day-over-day rate increase has been more than 5%.

All y’all come on down for hot chicken from the Hot Zone of Contagion.

Lee said business owners will have to cross their hearts and make the “Tennessee Pledge” before they can reopen.

Yup, he wants them to pledge that their employees are following safety rules, including wearing gloves, spacing out customers (only six to a table!), questioning customers about their symptoms and maybe checking temperatures.

Nope, no enforcement measures other than the “Pledge,” The Tennessean reported: “An order signed by Gov. Bill Lee Friday makes no mention of fines or other punishments against companies that ignore the rules, only saying that the government might take further action.”

“So in terms of enforcement action, it’s going to be up to these businesses to make sure that they’re doing this right,” a governor’s spokesman said, adding that he knows of no mechanism the state has created for businesses to actually sign the pledge. Rather, they can simply tell the public that they agree with the rules, the paper wrote.

To be fair, Kentucky has more deaths (213), and Tennessee has done more testing.

Check back in a few weeks now that its stay-at-home order has expired.

But, hey, Kentuckians, cast off those quarantine blues — road trip to Tennessee to party! Put on your best mask, and let’s drive south for honky tonkin’!

Maybe get a flat-top haircut!

You know that some of us Kentuckians (hirsute, hungry and hankering for a good time) will do just that, and then we will come back bloated with ‘cue and corona ready to stand united.

It doesn’t matter that Gov. Andy says, “You can’t be doing that!”

That’s right — Gov. Andy has not repealed his ban on Kentuckians traveling to Tennessee. He said last month: “I cannot control that Tennessee has not taken the steps that we have. I need you to not go to Tennessee for anything other than work, or helping a loved one, or maybe to the grocery.”

“If you ultimately go down over that border and go to a restaurant or something that’s not open in Kentucky, what you do is you bring the coronavirus back here in Kentucky,” he said.

It doesn’t matter that 47 days into the epidemic, Tennessee had 1,414.7 confirmed cases per 1,000 people, while Kentucky had 914.3, according to 91-divoc.com, which is turning data into nifty visualizations.

It shouldn’t matter that, for instance, Sumner County, just over the border from Bowling Green, had 593 cases, a 17% increase in just the past week, or that Robertson County’s cases grew by 20% to 136 in that same time period.

Tellingly, when it came time to create a partnership with other states, Gov. Andy chose Ohio and Indiana and Illinois — not Tennessee.

See, Tennessee was relatively late to closing restaurants and bars, a week after Kentucky did so.

And, now it is opening them before we are.

Yet, not everyone in Tennessee wants to be a bad neighbor.

Chattanooga Mayor Andy Berke (another Andy… coincidence?) said that, unfortunately, the city is being strong-armed into reopening by the county government.

“Yesterday, I learned that, despite public and private assurances otherwise, the city of Chattanooga would not be making its own decisions for the reopening of restaurants. This has understandably caused a lot of confusion for a lot of people in our city.”

“Consumers will only return to restaurants, shops, and other establishments if they know it is safe to do so. I do not believe that is accomplished under the State’s current plan. It fails to account for the growing number of positive cases across the state, and especially in Southeast Tennessee. It goes against the warnings of public health experts and doctors like those at the Tennessee Medical Association and Vanderbilt University. It lacks the groundwork we need to ensure that restaurant owners and managers understand their responsibilities and have the supplies they need to keep people safe from the virus. We also know that if cases increase, the impact will be felt hardest by the most vulnerable people in our city.”

The Tennessee Medical Association does think Lee’s plan is wrong. “While a statewide or regional approach might seem more attractive, this would not allow for hot spots that will certainly arise,” the TMA told the governor, a Nashville TV news channel reported.

And Vanderbilt University School of Medicine reported that “Tennessee’s recent progress, while real and positive, is fragile.”

“Recent experiences in other countries remind us that a second wave of infections is not only threat, but progress can unravel quickly. A model that predicts a single ‘peak’ and then a decline obscures that threat.”

Or, as NewsChannel 5 in Nashville put it unironically, the Vanderbilt report “warns that success remains ‘fragile’ and could quickly go south if social distancing is not maintained.”

So, let us close this with the immortal words of the Grateful Dead:

Baby won’t you carry me back to Tennessee … ”

Hopefully, not in a coffin.